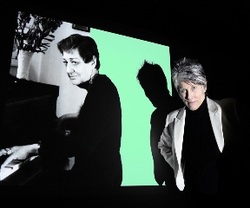 Lauren Crux is known primarily for her solo performance in which she works to create hybrid forms, blurring the boundaries between story-telling, monologue, movement, performance art, text, video, sound, poetry, photography, and sculptural elements. Grounded in the mundane, she explores how we manage this "drunken stupor" we call life—the messiness, the confusions, the contradictions, the struggles, the banality, the "divine play," the fun, the goofiness. She also co-creates and participates in numerous community-based collaborative art projects and group performances. Born in Vancouver, BC, home base is now Santa Cruz, California.

She earned her MFA in interdisciplinary studio arts from UC Irvine late in life (she has another degree and career as a psychotherapist), where they took a perfectly respectable writer and photographer and turned her out as a [dis]reputable performance artist. Since that time she has written and performed four solo shows (Two Truths & A Lie; OUTTAKES; On Being Cool: and other digressions; and THREE: a curious and irreverent look at the things that keep us awake at night). A version of her recent performance/monologue, Dinosaurs & Haircuts, exists also as an art object/book, designed by Reid Benes and which she self-published. www.laurencruxartist.com