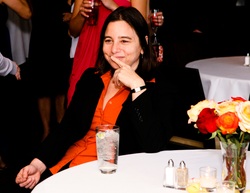 Sarah Schulman is a native New Yorker. Her novels, nonfiction books, journalism, films and plays reflect people whose points of view and experiences are rarely represented in the mainstream arts. She is currently involved in a number of projects. Her new book, The Gentrification of the Mind: Witness to a Lost Imagination, is forthcoming. She's currently working on two books: Solidarity Visit: Israel/Palestine and The Queer International and The Healing, a novel inspired by Balzac's Cousin Bette. Newly working in film, she has co-written three with director Cheryl Dunye: The Owls (premiere, Berlin film Festival 2010), Mommy is Coming (released in 2011) and Adventure in the 419 (in pre-production.) She is working with director Deborah Kampmeier on the film Lonely Hunter, about Carson McCullers. With Jim Hubbard, Sarah co-directs the ACT UP Oral History Project (www.actuporalhistory.org). She is currently organizing a US tour of Palestinian LGBT leaders.