For the first time in years, I could think deeply for long, unbroken stretches of time. Broken is the operative word here—I was severed in two, trapped for three weeks in the hospital with a fractured hip. I finally had the time to figure out what I wanted my next creative project to be. Maybe it was the need for deep escape from this unsettling (and painful) reality or maybe it was the oxycodone: I decided I was going to write a history of women’s poetry, as poetry. I had no idea how I was going to do this, only that I had to do it. There were only two rules: the women had to be deceased (my job was to revive them) and my focus would be on lesser known poets and the lesser known works of better known writers. Over the last two years, I have studied and copied the verse of more than 700 poets from every era representing more than 70 countries (some in translation, some in their original languages). My 26 hand-copied notebooks of women’s verse translated into groups of themes now at 3,000 entries on a spreadsheet and counting. “27.2727273 Readers” is the first piece I have completed for the project. Time to focus on creative work remains a problem. I hope I do not have to break the other hip to find out what the next phase of the project must be. 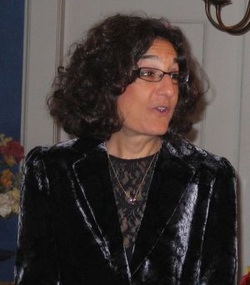 Sima Rabinowitz is the author of a collection of poems (The Jewish Fake Book, Elixir Press, 2004) and a chapbook (Murmuration, New Michigan Press, 2006). Her poetry and prose have appeared in Trivia, Sentence, Salamander, Hotel Amerika, Water-Stone Review, Prairie Schooner, South Loop, Hamilton Arts and Letters, and The Tampa Review, among other publications. She has received fellowships and awards from The Minnesota State Arts Board, The Loft Literary Center, The Jerome Foundation, and Bronx Council on the Arts. She lives with her partner of twenty years in the Bronx, New York, where she works as a business writer and editor.