In my next incarnation
I will study the habits
of snails on certain rivers
in Southeastern Louisiana,
possibly the conversations
of gophers meeting in burrows
in a desert designation;
the appetites of caterpillars,
the polished bones of those camels
who came before the Mayflower and DAR
or the molars of a once-woolly mammoth--
something finite and achievable.

Graphs and charts will be my tools;
I will learn the architecture of numbers,
bask in the security of equations and proofs;
I will write summaries, abstracts, grant proposals
using incantations like Prioritize and Strategy.

I will conquer the microscope,
exploit bacteria,
design their choreography,
record their whispers,
note their constellations,
inspire a personal cult
on a culture slide.

I may fall in love,
have an intimate relationship
with a handsome though troubled computer,
create a sonnet sequence--
be love’s slave in the binary mode;
nevertheless I will be powerful,
I transist therefore I exist.

Incognito in my insect shades,
traveling under an assumed name
I tame lions,
flourishing my whip like a dervish lasso:
the lions thrust their jaw,
flick their claws,
leap to their platforms
dancing to the crack of leather;
threatening, baring their teeth, they roar;
nevertheless they adore me;
I am muscular--
lean and brown as an Apache.

In my next incarnation
I will not
collect recipes like postage stamps,
pull weeds, pay bills, be on time
or iron and mend
other people’s writing.

This poem, or should I say fantasy, was written a while back. To update: I still collect recipes, no longer iron and mend--metaphorically or otherwise (except for my husband, and that’s strictly metaphorical). Last spring I discovered the wide world of lit mags, online and off. That’s when I started a scribbled “acceptance” list (on recycled paper, of course) on which I keep track of a handful of items, such as whether the editor of said publication was an M or an F. So far the F’s outnumber the M’s two to one, though none those poems was “feminist.” Draw your own conclusion. 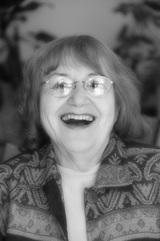 Sylvia Ashby’s background is in theatre, acting, and writing; she’s published 15 plays for family audiences, with thousands of productions.  After seeing her short memoir in Anderbo.com last March, she was prompted to send out poetry; now she has a few dozen pieces out or forthcoming. In 2014, her poems will be seen in Abyss & Apex, Hermes, Avatar, Muddy River, Veil, Subterranean, Frostwriting, Mezzo Cammin, etc.