A moon blots out a sun.
Darkening silence comes between us.

In place of my house,
stands a tower of stone.
At its crown —
the lightning catcher,
she who writes on the blank rune.

Below, my departing selves
wait with their boats.

At my wingbones
four winds rise.

The original version of “Eclipse of Hope” was written sometime in the mid-1980s, before I turned forty and left the U.S. for Canada. I loved the poem even while I was writing it because it felt both acutely personal and eerily collective. But there was a tongue-tangle in the middle that I couldn't for the life of me fix. It took another twenty-five years before the poem as it was meant to be suddenly surfaced in my mind.

I'm happy that “Eclipse” has finally found its form, and even happier that it's found a home in the new Trivia. 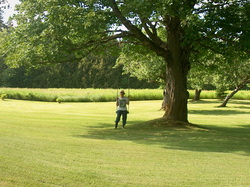