We had rituals we didn't know what for
Victoria Hoyt 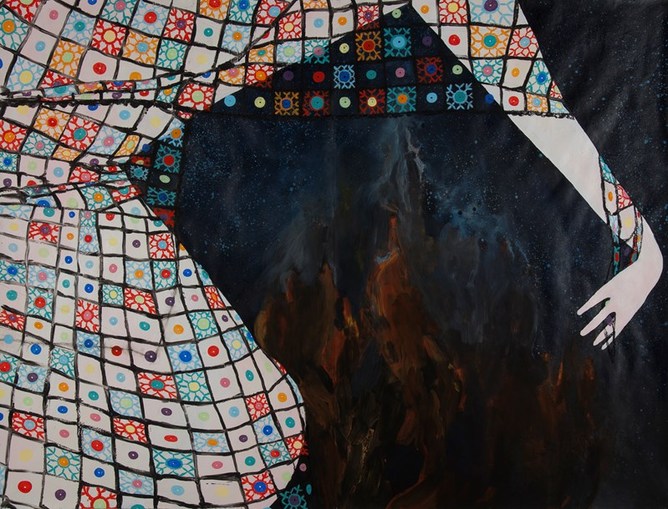 The following from writer Ursula K. Le Guin was a launching point for the series of paintings of which "Lack of Cover" and "We had rituals we didn't know what for" come from: "On the maps drawn by men there is an immense white area, terra incognita, where most women live. That is all yours to explore, to inhabit, to describe.” This is where "Lack of Cover" began -- I needed to turn away from painting what I wanted to know and start painting what I knew, but had never described. In this new world of mine, women loomed large. Their collective femininity is felt in the air -- strength and possibility passed from one being to the next. I thought of all the times women surrounded me -- on the swim team, with college girlfriends, being with my sisters and mom, performing in a feminist collective -- and I painted what that felt like: refuge, power, mystery, beauty and belonging.

I wrote this to go along with the paintings (which also figured out the titles of my work):

"You Are Some Other Thing"

We had rituals we didn’t know what for.

All hanging inside out

Knowing we were multiple bodies,

We began to take up more room

We outgrew our tongues

We sought a new place, our terra incognita.

Where emptiness wasn’t waiting to be filled, it was just empty,

We made a roof out of the space just above our heads.

We could breathe again; we could speak and understand

We could do anything.

Our mothers were joyful and happy

Our grandmothers were mixing margaritas

When we were tired, they made us rest in the grass

We played with our hands,

Made our bodies into other things.

Our voices started to take over, little by little, one by one.

They filled the night

The mornings cried out and everything smelled of worms

We had never seen such beautiful things. 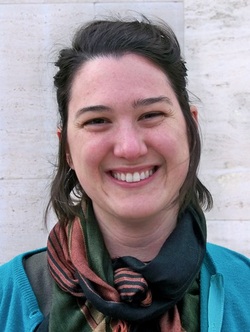 Victoria Hoyt is an artist working in Omaha, Nebraska. She received her BA from Gustavus Adolphus College in St. Peter, Minnesota and her MFA from the University of Nebraska-Lincoln. Hoyt has shown extensively in the local and regional area and teaches part-time at Metro Community College in Omaha. Recent fellowship and residencies include the Union of Contemporary Art in Omaha, the Kimmel Harding Nelson Center for the Arts in Nebraska City, and the Vermont Studio Center in Johnson, Vermont.