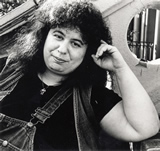 These words were spoken in a memorial service for Andrea Dworkin, feminist philosopher, author, and uncompromising activist against pornography and prostitution. I regret that I did not take note of who delivered them, because they so brilliantly summed up the conundrum of this great woman's life.

Andrea made no concessions to political expediency, societal prejudices, academic protocols, or social hierarchies. She spoke the truth as she saw it, with what certainly appeared to me to be complete disregard for the consequences to herself. Few of us can do that. Few of us would want to. We like to be accepted. We like to feel that what we are saying will be acceptable. We are concerned about alienating our audiences, offending our hosts, embarrassing our friends, jeopardizing our careers, sabotaging our networks, compromising our alliances. We censor and edit ourselves in order to be effective. We are understood, at least in part, because we are willing to tailor our message to our audience's capacity to hear it. We stay away from our bottom line as long as we can in order to keep everyone at the table as long as possible.

Andrea's clarity came from the fact she spoke directly from her bottom line. It's visible in nearly everything she said or wrote. It was always crystal clear where she stood on an issue, and she stood with those whose voices were the most silenced: the women and children who were victims of sexual abuse. Andrea's bottom line made clear to most that she did not have a lot of support from powerful mainstream allies. She was not supported by academia, by corporate interests, by left-wing liberals, by governmental agencies, or even by the women' s movement that she helped establish. Her clarity made it clear that she was fair game to anyone wanting to disparage, discredit, misquote, vilify, scapegoat, ridicule, malign, or libel her. Reputations could be enhanced and careers promoted by attacking Andrea. Misunderstanding Andrea Dworkin became a national pastime, an industry, and an academic discipline.

And what about her fierceness? Being fierce strikes me as a protective response. Something about which one cares deeply has become endangered. This is not the dictionary definition, but it's what I think of whenever the word is applied to women. Andrea's fierceness invariably drew attention to whatever or whomever was under attack, and also to how deeply, how passionately, how utterly she cared. In a world of cool political machinations and sado-masochistic academic equivocating, Andrea stood out Wildly. There was something feral about her fierceness.

Andrea has died, but her words live on–weapons and shields both. Who can be fierce and clear enough to pick these up and engage with an enemy that never sleeps, an enemy that grows stronger and more global every day, and who never seems to tire of inventing new tortures and humiliations for women?

Carolyn Gage is a radical feminist, lesbian playwright. The author of more than fifty musicals and plays, she has written four books on lesbian theatre. Widely produced and published, she tours internationally in her own work, lecturing and offering workshops on lesbian theatre. Her catalog is online at www.carolyngage.com.