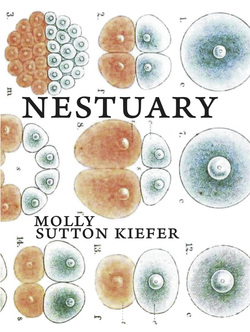 Molly Sutton Kiefer’s Nestuary is an invocation of and hymn to the body, (in)fertility, pregnancy, childbirth, breastfeeding, and motherhood. The book confounds generic distinctions between essay and poem, a formal experiment that delivers from / to the gut of sensory immediacy along with its sure-footed and surprising stylistic turns. Nestuary devastates and nurtures, aches and soothes, as it catalogues past and present, experience and memory.

Fulfilling the mission of Ricochet Editions at Gold Line Press, which is dedicated to publishing innovative, trans-genre, or genre-less works, Nestuary reveals its hybridity in the lexical play of its title: nest + estuary = sanctuary. A nest is a place of birth and shelter, a space of refuge, an innermost recess, a holy place, and sanctuary. An estuary is the tidal mouth of a large river, a place of transition from fresh water streams to the salty ocean, metaphorically a transition between fertility/infertility, a passage into motherhood, the uncanny, enchanting, alienating bodily obligation, living for and with an emerging other, becoming a body at war with itself, surrendering, exploring, finding itself strange but compelling:

Peach pit: wrinkled and old and all that’s left over. A little
meat there. It’s an object I can carry by marsupial pouch,
keep it with me every day, reach down and touch it--
touch it—lines and caverns and shape of something—not
empty but not becoming.
In wanting this, I pit myself against myself. (19-20)

Here, the body is divided against itself not unlike Kiefer’s text, which splices fragments of ancient Greek myth, Thessalian witches, Roman goddess Diana against an affable, candid narrative voice. Kiefer invites us into her process of thinking through a multiplicity of motherhood frames, looking to the sky and finding not the certainty of the mother myth, but the necessity or inevitability of telling mother stories: “Imagine the night sky properly disrobed, leaving only the chips of light and blackest black. I imagine woman in white swallowing the bulb of the moon, wearing it in her center” (5).

Nestuary is at once a deeply personal account of Kiefer’s struggles with (in)fertility, an unruly, difficult pregnancy, and a well-planned delivery gone awry resulting in an unwanted but necessary c-section. At the same time, Kiefer’s narrative assumes an archetypal posture, stretching beyond the immediacy of a particular birth scene giving voice, often broken and fragmented, to the experiences of many women. This poetic prose is at its most daring when its formal experiment renders the powerful experience of pregnancy and the long road to conception as emotional labor.

Kiefer builds Nestuary out of a variety of “acts of writing,” fulfilling the promise of the book’s initial epigraph from Erica Hunt’s The Grand Permission: “Each act of writing or mothering stuns by the immensity of its hidden archaeology, of failure, riddled origins, hidden clauses, minute pleasures achieved through tactical approximations.” Kiefer layers and disturbs history and time, moving nonlinearly through her own autobiography. Invoking mythic images of pregnancy and detailing symptoms of polycycstic ovary syndrome (PCOS) including weight gain, hirsutism, diabetes, skin tags, snoring, depression and anxiety, irregular menstruation, and ovulation, Kiefer, at the beginning of her story, summons its end: “I can tell you this (now): This story has a happy ending” (9). This direct address to “you” and “(now)” functions as a “tactical approximation,” entwining “you” the reader with the moment of reading into her acts of writing. This is her story, and it is yours, ours, compellingly calling forth these experiences, which in intimate familiarity—as mythic tale or medical process—is always a product of imagination.

These struggles with (in)fertility render a body unable to heal itself or reproduce, and certainly not on demand or as planned. Kiefer underscores the cruelty of intention gone awry:

And then pregnancy, what “your body is designed for,” as conventional wisdom claims. Kiefer’s pregnancy resulted in severe morning sickness, required IVs, agony, despair and hope: “Too, there is the clump of physical altercations. Insult to injury” (14). The body, ostensibly designed for childbirth, rebels violently.

In this volume, Kiefer takes up and extends the verse exploration of pregnancy, birth, parenting poetry and prose initiated by Sylvia Plath, Adrienne Rich, and 1970s feminisms that opened up the possibility of writing candidly and honestly about experiences of motherhood, concretizing the embodiments of pregnancy and childbirth. Nestuary includes three sections, each opening with a citation and followed by material consisting of numbered lists, extended paragraphs, poetic stanzas, citations of ancient Greek mythology and Shakespeare, a list of birthing experience options, a brief archeology of the word “Caesarean,” a list of six women who died between 1999-2012 while pregnant and were kept on life support until their babies were delivered closer to term, and multiple references to women writers and poets including Gillian Conoley, Toi Derricotte, Beth Ann Fennelly, Doris Lessing, Sharon Olds, Adrienne Rich, Camille Roy, and Naomi Wolf.

Keifer builds a nest out of a variety of acts of writing, voices, histories, and experiences weaving them into her own. She breaks the narrative passages with italicized interjections, voicemails, and definitions with words reduced to phonetics. For example,  “[sist]” is followed by a series of seeming definitions divided into parts of speech:

What the definitions define is unclear and multiple. The intimate, familiar voice becomes spliced with detached definitions. In the third and final section, Kiefer’s focus shifts to a mother acknowledging transition: “I held her within long enough, and then I held her again without" (66). In this stunning section with the “ache and release” of nursing and the “mapping of the body and its new workings,” Caesarean, “failure to progress,” becomes a caesura, a line break, a break between words within a metrical foot, white space. They share the same Latin root caes, “cut, hewn.” The caesura becomes for Kiefer “breath, feathers in fields, the down in nests, flight, drifting clouds, fog, ice crystals on windowpanes in winter, children lifting their arms while swinging or riding a bicycle (no hands!), the coast, sea oats, lungs” (88).

Nestuary ends with Kiefer safely nesting with her children in “our limb-woven home,” literally in the act of writing, her words bearing witness to motherhood (97). Surrounded by the loving chaos of parenthood and burning with an abundance of milk, love, and blessings, Kiefer says “I am no longer the tinder but the fire itself. Our quartet, a little furnace of love” (97). Her Nestuary is at once lyric essay, sacred song, and sanctuary.

Kiefer had me at her title: Nestuary -- a non-word word with immediate echoes of recognizable words. I research, write, and cannot stop trying to read Gertrude Stein. A quick flip through Nestuary with sightings of dictionary-like definitions, parts of speech, citations of important authors, and nearly empty pages (I love the suggestiveness of empty space almost as much as the words that can fill it) might have led to a very brief review: “excellent, stunning, read it.” But the process of writing about Nestuary, listening to and thinking through its complex structures and vital stories, resonated deeply with my own life and near-death experiences with childbirth. But it is Kiefer’s descriptions of nursing toward the end of the book that stay with me for the literal and metaphoric sustenance they offer. 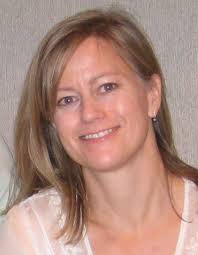 Sharon J. Kirsch, a member of the TRIVIA editorial collective, is Assistant Professor of English and Rhetorical Studies in the School of Humanities, Arts, and Cultural Studies in the New College at Arizona State University. Her interdisciplinary research and teaching interests include rhetorical, literary and critical theory, American literature, modernism, and women’s writing. She has two books coming out this year: Gertrude Stein and the Reinvention of Rhetoric (University of Alabama Press), which reinterprets the iconic literary figure as a major twentieth-century rhetorician, and Primary Stein: Returning to the Writing of Gertrude Stein (Lexington Books), a co-edited collection of scholarly essays dealing with Stein's primary work. Additional publications include, “Two Exhibits, One Film, and the Pleasures of Gertrude Stein” in The Feminist Wire, “It Has Become Our Will: Onward with Adrienne Rich (1929-2012)” in Trivia: Voices of Feminism and Rain and Thunder: A Radical Feminist Journal of Discussion and Activism, and “PR Guns for Hire: The Specter of Edward Bernays in Gadhafi’s Libya” in Present Tense: A Journal of Rhetoric in Society.