Laws of Kissing If Newton Were a Woman
Hannah Baker Saltmarsh

If you press a stone with your finger,
the finger’s also stroked by the stone;
Whether you’re stone or flesh,
the teenage boy’s fingers bleeding against a guitar

or you’re the plastic pic tilted,
small as luck. Or the trumpet vibrating
Yeah, yeah, yeah back to the pelvis leaning into
the mic stand. Whether you’re my thumb brushing

against the foil-top beer label with the cubist elephant,
or the night, both refusing at first to want to let go;
now, lit together into one blare, the seasonally-depressed poet
at open-mic and the ambulance passing, bluing the bar window

into a trippy surround-sound. If a horse draws a granite slab
tied to a rope, won’t the horse himself
be held fast? Newton, are you saying
if I part my lips relaxed and open the way I’ve practiced--

kissing Carebears, wrapped in a sleeping
bag and pressing into the carpet, muttering dirty
words from a radio song, words of my best friend
who tells me on the phone, that, after jerking off,

he’s looking at his real semen in his toy microscope,
and it’s textbook-exact—but, Newton, with your hard-on
for the two grinding edges of everything, will someone press
his lips against mine, impinge upon my body, also pressing,

maybe even slightly resisting, but in whole saluting without hindrance?
I don’t want my love continuing in the right line,
only to be retarded by air or other impediments:
HPV or bad timing or possessive tirades, impelled downward

by gravity. Newton, preserve my motions both progressive
and circular, as comets continue for a longer
run with less resistance, less energy,
being greater bodies in even vaster vastness.

​This poem began as a reflection on Newton’s laws from the perspective of a female coming-of-age story; thus the laws about motion become reconfigured as a way of understanding the mutuality of sex and passion. To the young female narrator, she wonder if kisses can also allow for action and reaction in the same way, as she longs for connection and the end of her dismal, hallucinatory unrequited love and virginal fantasies of what sex is. Significantly, the narrator wants to envision that Newton should be more concerned about sexuality and sex than is reflected in his “Laws” of nature. As the poem gains confidence reckoning with this great, masculine voice of Reason, various reflections about love’s course ensue, and what could prolong or impede the force of her loving. Finally, the narrator offers a prayer to Newton in an ironic voice that actually supplants Newton’s godlike status by suggesting her own majestic law-bending womanhood. 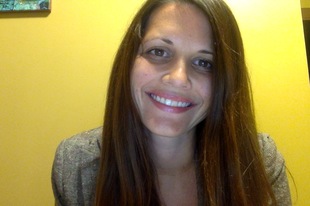 ​Hannah Baker Saltmarsh has published in The New Republic, The Yale Review, The Antioch Review, The Denver Quarterly, The Times Literary Supplement, Gulf Coast, and other journals. She holds a Ph.D. in English Literature from the University of York (UK) and an MFA in Creative Writing from the University or Maryland. She is an Assistant Professor of English at Dillard University and lives with her family in New Orleans.