Yes, I'm a Lesbian. I've always been a Lesbian from my earliest memories. When I told my mother what I felt about another girl, at three, she said, "You're in love with that girl!" And I was. I knew it was a choice, as Lesbian Feminists also said in the early 70s. We didn't plead with the patriarchal power structure, as so many do now – "Please give us equal rights because we can't help it that we were born queer. We would change to be like you if only we could. Pity us." Our choice to be Lesbians was and is a choice of pride. Why would we want to be anything else when we are the best and love the best? Of course we aren't going extinct. Lesbians can never go extinct. We exist even in countries where we are killed just for being who we are. If patriarchy didn't prevent us before, they sure can't stop us now! 1

I found my first lover when I was seventeen and began searching for others like us. I went to DOB (Daughters of Bilitis) and the bars in 1969, but I was underage. In 1970, when I was 19, I found a vibrant and exciting Lesbian Feminist community in the San Francisco Bay Area. It was like falling in love again. So many Lesbians and so many events. I joined A Woman's Place bookstore collective, worked on one of the first Lesbian Feminist Conferences ever in 1972 in Berkeley, worked on the first issue of Amazon Quarterly, became a Dyke Separatist in 1972, and 1973 co-wrote and published one of the first Separatist newspapers, Dykes and Gorgons. I also worked on the Lesbian Coffeehouse collective, went to an all female dojo, taught self defense to women and girls, wrote articles about radical Lesbianism, worked on Dyke Separatist Gatherings, made connections with Separatists in other countries, lived for a while in some of those countries, and co-wrote and co-published our book, Dykes-Loving-Dykes: Dyke Separatist Politics for Lesbians Only in 1990.

Of course Lesbian Separatists are still visionaries. Everything we said and wrote almost 40 years ago is still true. What we wrote in our book over 20 years ago is even more obvious now about how males are destroying the earth by marking territory with over-population and pollution. 2

The description of the harm lesbophobia and Lesbian-hating among Lesbians does to us individually and as communities is even more evident now. That betrayal, along with classism, racism, anti-Semitism, ableism and ageism, continues to damage Lesbians.

Yes, it's upsetting to have been part of such a powerful movement and to now witness what has appeared to be its ending with even our recent history wiped out. Lesbian Feminist history is being re-written and re-told to make it appear as if we've always been part of an "LGBT" community – which includes us with our oppressors and obscures the fact that most Lesbians, including anti-Separatists, used to be part of a mostly female-only community. "Women's Studies" at universities and colleges have almost all been destroyed and replaced by "Gender Studies" or "Queer Studies." "Gender Studies" is a right wing politic because it deeply supports the patriarchal status quo against feminism. Feminism is about the oppression of females, while discussions of "gender" imply we are all equal – or even that Lesbians are in a position to oppress our oppressors. "Gender Studies" taking over "Women's" or "Lesbian Studies" is an attempt to undo over 40 years of feminism and makes it very difficult for younger women and Lesbians to find out about basic feminism or what our Lesbian and Lesbian feminist history has been since the 60s. (Sheila Jeffreys describes this very well in "Unpacking Queer Politics" and her other books.)

Those who insist on including us against our will in their "LGBT" groups ignore the fact that most Lesbians still don't work politically with gay men or are in the same social groups. It's as if our separate identity as individuals and as a community is being consciously destroyed. An example is the media fuss and focus on the enormous pink triangle that is put on a hill above San Francisco each year during "Pride Week." Lesbians are encouraged to participate, but almost no one I've talked with (individuals or organizations) knows that the pink triangle represents only gay men. Lesbians were forced to wear a black triangle in the Nazi concentration camps. This is not obscure information. Yet even while our history and separate identity as Lesbians is ignored or wiped out, we are still expected to take care of and support everyone but Lesbians. When we do have support, it's often taken away, as when the Shanti Project, which was organized to help dying Lesbians and gay men in the 80s, was changed to help only "people with AIDS" (overwhelmingly gay men), leaving dying Lesbians nowhere to go – even though gay men as a group have far more money and resources than Lesbians.

When friends and I advertised on Lesbian lists for Separatist meetings, we were continually harassed by gay men and by men claiming to be Lesbians. Anyone trying to save the tiny bit of remaining women-only space (forget Lesbian-only, which has rarely existed in the US) is likely to be accused of being a "bigot" or oppressive for not welcoming men, including men who demand we accept them as Lesbians. Every year, the San Francisco Dyke March has an increasing number of men in the March (often filming naked Lesbians), no matter how much they are asked to not march by the March organizers.

Very few Lesbians I meet of any age seem to know even basic feminism. Our right to our own culture and space has been eroded by a humanist liberalism that ignores that men still oppress women and Lesbians. But no matter how we are undermined, it will never go back to how it was before Lesbian Feminism. It can never be as bad as it was when I was a girl and there was not one book that could be found in a library or one film that was not Lesbian-hating (usually with the "perverted" Lesbian dying at the end and her lover going het).

In the midst of the sadness about what we have lost, I'm seeing what we have gained. Many of the old activists have walled themselves off from present Lesbian communities. I'd also mourned the early 70s, but the community I'm in now is much larger and friendlier. I meet new Lesbians every week, and there are so many Lesbian events that I sometimes have to choose between five in one night. (If possible, I'll try to get to three.) I have to ignore that very little is female-only, and very few of the Lesbians are feminists or even know what feminism is. Yet, like in the early days, most of these Lesbians came out because of their love for other females and not because they thought the politics were trendy. There is a love, and warmth, and camaraderie that is beautiful, with an age range from the teens to eighties. Except for a very few curmudgeons, I feel such friendliness at these events, even when I don't know many of the Lesbians (although it hasn't taken too long to meet over 300). Ironically, some of the more political events for older Lesbians are unaffordable, while my younger musician and music promoter friends never turn anyone away – which is important with so many Lesbians now living below the poverty line.

I'm also meeting more Radical Lesbian Feminists than ever across the US and across the earth online.

So I say, let's bask in the warmth of all the Lesbians and keep our struggle going.

[1]As I wrote in 1990, in our book, Dykes-Loving-Dykes: Dyke Separatist Politics for Lesbians Only,
The story of Lesbianism is the story of magic and survival. In almost every part of
the world, we’re said not to exist, or we’re hated and lied about. Yet we persist in
surviving. Lesbians come from every culture and country. We appear where there
are no others of us, coming from people who try their hardest to make us committed
man-lovers. We create ourselves out of nothing, appearing like weeds that cannot be
destroyed. We crack open the foundations of the enormous structures of male
supremacy.

[2] Yes, men couldn’t do such damage without the help of women, but I can’t believe women on their own would have created plutonium, which is deadly for hundreds of thousands of years, or the nuclear industry which contaminates the earth, air, and water. Men created agribusiness, GMOs, colonization, and war. Women buy toxic unnecessary household and personal care products, but it’s male corporations that invent, mass-produce, and mass-market them. Women are the majority of those who fight to save wilderness areas and rescue animals (except when high-paying, high-status jobs are involved), while men are the primary destroyers of the last remaining forests, daily causing the extinction of yet more species, over-fishing and polluting the oceans and rivers and lakes. Few women kill and make entire species extinct for sport, as men do. There are no restrictions on NASA, private jets, SUVs, etc., even though global warming/destruction is obvious, yet many Lesbians have extremely limited lives because of giving up cars for the environment -- while governments refuse to provide decent public transportation and don’t insist all cars at least be hybrids. 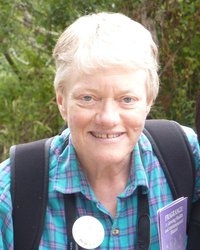 I am a working-class, ex-catholic, mostly European-descent (English, Scottish, German, Irish, with some Native American ancestry), lifelong Lesbian (in love with other girls from my earliest memories and have never been het), born near Cincinnati, Ohio in 1950, and now live in Oakland, California. I've been printed in several journals and anthologies, including For Lesbians Only, Finding the Lesbians, Lesbian Friendships, Amazones d'Hier, Lesbiennes d'Aujourd'hui, Mehr als das Herz Gebrochen, the Journal for Lesbian Studies, Lesbian Ethics, and Sinister Wisdom. With Linda Strega and Ruston, I co-wrote our book, Dykes-Loving-Dykes in 1990.

Though I've been disabled since 1981 with ME/CFIDS (Myalgic Encephalomyelitis or Chronic Fatigue Immune Dysfunction Syndrome and MCS (Multiple Chemical Sensitivity), I'm also called "Party Animal" and go out to as many wonderful Lesbian events as I can. If you're in this area and want to find out about events, feel free to contact me at Slakewings@aol.com.