Birds of a Feather
Robin McCarthy 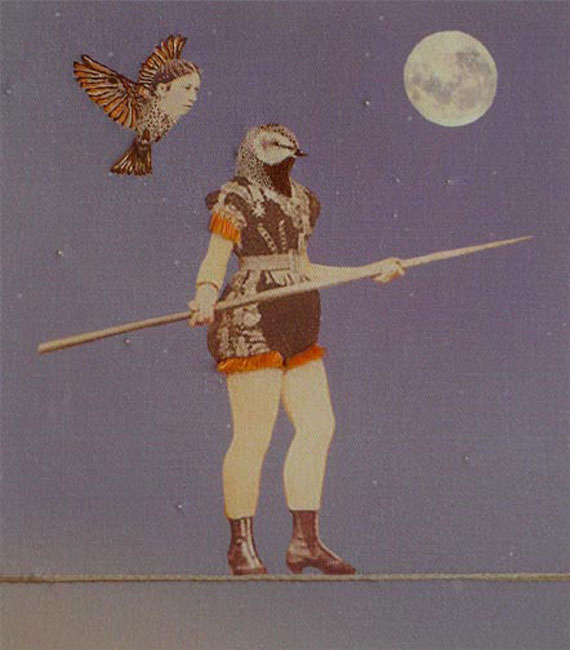 At times the inspiration begins with a particular photograph. Other times I have an idea and then seek out an image that will work with the concept.  Always, there is the link of old and new, ties that bind. You can’t have one without the other and I like playing with both. Once the photo has been established, illustrations are blended in digitally and the image is printed on cloth.  Photos taken on old cameras are repurposed into a new story and printed on current technology. It is at this point I begin the embroidery embellishments, back to an old fashion pastime but approached with my twenty-first century point of view. My hope is the end result elicits humor with thoughtfulness.

Robin McCarthy is a fine artist living in Los Angeles.  She was an art major at San Diego State University and studied graphic design at Otis College of Art and Design.

Her clothing designs have been featured at Saks Fifth Avenue, Nordstrom, Barney’s New York and boutiques across America.  McCarthy’s talents have also been featured in theatrical costumes at the La Jolla Playhouse, University of Texas Austin, The Alley Theater Houston, and the Jim Henson Creature Shop.

Currently, Robin McCarthy’s sense of whimsy, imagination, and humor are displayed in her work doing graphics for television and her fine art, which makes use of a combination of photographs, illustrations, and embroidery.  Her early years of daydreaming, sewing, and a sense of play are all evident in her body of work. To learn more about Robin's work, visit her website:  http://robinmccarthyartwork.com.