I will cut through this way
since here in the trees the sky’s busted
in places in places so thin so
you see the blue netted in grey
in patches bright white by the sun
the bark and the ivy.

But it is nice to walk out and away from the pavement.

So anyway in translation this week
our man Emerson goes to what end is nature?
I think to what end
man is an end is my super-weird body
and may I sleep in these fields
your nice clouds of grass?
I stuck on end
as finish or goal. But man
it is nice to get out of the city
of stores that halve the self.

This hoofed-up walk and here
where more ramshackle

some one set up
a blue tarp house
is what it is and it sags
down the pitch to the north.

Around that tree that bundle
a man. A couple of couples
pass by paired up in shared earbuds,
where you hear only half
the song and also he had
a way of throwing
his head seeing my legs in me.
I’ve got ham and cheese in this pack,
and my bike card in case. I want to reach
that monkey boulder where they once kept apes,
which you see from here past a signpost.

They contrived this tent
from a poster. We find a green
chain link fence
a long long line tent hides
a thing planted
planter. Like a parterre. They would
have that square order
they like they and their stores
that halve the self. We will like
to know where our
plants are planning
to push through. I smell parsley,

or slugs. Being winter. Still a
lunar brand of light
a park on pause.

This past week with my student
and the kids. So this teaching
does me good since you can’t keep
to conversations here
with myself. Crossed a man’s
eyes as he jogged by.
He has ankles like ankles.
That might snap

What else. Since we do this
now reflection. I missed
again but have been
accustomed to my own
irregularities and moments
like this we will sleep less
or run strange
is what they say
and I haven’t not.

Would it stay with you
that carving there’s a carving
here beneath a dead tree
being either a heart or a lock
or not a carving at all but a blight.
Now I see the whole trunk
was sick. See a red rash
ripples up the bark.

They say it's normal
to not be regular. To make
friends with but one half
stored by the city.
I reached the bridge
with a plaster lumber rail,
so I need a stick two sticks
to race beneath it.

Yeah no, be there in a minute, ok?

I pretend my mic
is my cell and I should
find a friend to race sticks with.
A belch of flies blooms up
against the backlit halves of the sky

Trash overflows from the full trashcan
pans out cross the path
so what I’ll do is I’ll
rustle up a couple sticks.

First thing to do
is to beat down
the transpiring trash,
in the trash can. See half
of it is that the bag’s too small
and it’s stretched and the tension, it,
the trash floods out.
Grasping mossy sticks.

Guy jogs by with his exhausted dog
calls her name
Alia as he goes.

Because they’re dogs
you think they can run
when small they burn
out fast. I mean.
I may be wrong.
I never was a dog.

Another harnessed puppy
with hand-shaped ears
poses his paws on my knees
a man says no
no don’t jump. I miss dogs
how they furnish a portal.

So we’re saplings here.
Types of a white flaking bark.
And the light bark burns pale like
you walk in a wheat field

but if you were one
one. One hundredth your size.

And there’s no leaves.
None but the dead that still
hangs half shaded in red
and up to my right
again some’s little house.
Well in truth
coins in my pocket

They have a blue water pitcher.

A flap of tarp flags
in the door that gives
on the entry a piece for shoes
and paper bags and an appliance.

I wonder how they are allowed to settle
in the park the lungs of the city,
they are so blue and so visible.

In nineteenth century Paris
flâneurs will promenade
their tortoise or ferret
I mention because a
woman here walks a white ferret.
This family can’t get enough of it.
A father mother and two twins
they stand in a circle the father
shouldering a basket
and twiddling his fingers
at the ferret who sniffs
a flat ball submerged in dirt.

In the metro when you want
to cradle your private life to your chest
and keep it in tact in time. I notice excuses
contented defenses when the clean
and beautiful regards of strangers
cross my gaze in the clap of doors

That encampment may have been empty
for sometime except I can see
a body I think a beard
at least and glasses
yes reading the paper.
And here the path paved
and an equestrian
sign. Ages since I rode a horse.

When was the last time.
It may have been at a ranch
vinegar smell from sheaves
of hill grass and no fish
in the stream but a few spike dace.
We seined that species
our survey finds them halved
since up the city sprouted

I think to slip through
an atmosphere with coins and
coins in my pocket for my coffee
for the poor man by my doorstep
like my body a planet.

That man reads while he walks.
His book holds
his spine back and
chin down & that is how
words enroll my posture

And I wonder what I’ll do with this
when I get home. Where I am
meant to make rice and soup &
find lemon cleaner. It’s maybe that I believe
that I may console my objects
with half a word and a complete
task. If this gets said
we’ve been seen so is to say
to say is to be seen I want to say
and stay unseen. I can’t see
how to hit the monkey rock
from here. Look at the method
here in the stream. It’s compass arcs lined
by planned moss that might
brindle on a bright day dappled by the leaves
thank goodness for the poor
weather which shunts the nice scheme.

This poem grew from one of a series of recordings I have adopted the habit of making as I walk around Paris, where I currently live. I started wearing a hands-free microphone because I noticed it was a good way to avoid having to engage with men who sometimes hassle me in the street. When they approached me, I could just pretend that I was talking on the phone.

In “One is Not Born a Woman,” the feminist theorist Monique Wittig identifies the material role words play combatting the reality of oppression:

I find comfort in the wisdom that the disruption of language patterns may effect a material disruption in the world around me. I want to write poems that cut past classes of gender to the pith of subjective experience and that render the “alter” experience universal. I want to write poems that work for the disappearance of the class of gender. I am a woman and feminist but following Wittig, I question the validity of the classification “woman” and as such my work as feminist is not about “being woman” but about reevaluating “woman” which is to say, about reevaluating my own consciousness.

So the writing of this poem involved transcribing a recording and re-working it using erasure, collage, and revision. I try to take interesting moments in my monologue and arrange them into an emotional terrain. 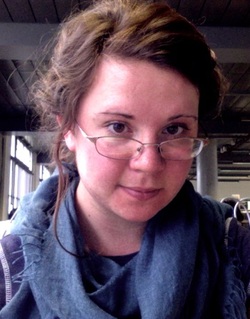 Sally McCallum is from Tucson. She is majoring in Creative Writing, French, and English at the University of Arizona and is currently on exchange at the University of Paris 7, where she studies French literature and literary translation. Next year, she will return to the UA to complete her degrees and write her honors undergraduate thesis, which will be a collection of poetry.