Walking on the Moon

Elana Dykewomon
Wanting to write and work for lesbians "often feels like saying: I choose to walk the streets of a lesbian village on the moon – they're choices without a real location" ("The Ex-patriot and Her Name" in InVersions)Once upon a time, as all good stories begin, bands of women in a slew of cities around the globe decided to make free lives for themselves. How can we do that in a world controlled by men? A world where winning counts more than compassion? Oh, the women said, by leaving that world behind. Do not give your power over to those who believe in domination and act on their belief. Do not include them in your new world.

To create a different world, we must imagine exactly how we want that world to be, and proceed. The vision, the women said, will determine the outcome. Not that any outcome is guaranteed. All of us grew up on the planet we mean to rethink, so we must pull ourselves inside out, the process of which will be unpleasant, at best, and leave some of us hopelessly garbled, stuck between worlds, screaming, our messy guts stuck to our hands. Yet we must try.

The women forged ahead, and the results got messy, messier than they imagined. Some of them had humanitarian visions, meaning they wanted to include everyone who agreed to no war, no racism, no hierarchy. Others had like-minded visions, of societies where women had to agree on certain principles: no men, no meat, no electricity whenever practical. Move out, away, off the grid. Still others said, we can not define ourselves by what we are against, but must move to what we're for: for women, for peace, for respect for the land, the animals, for a fair distribution of goods and services.

What's fair? Someone asked, remembering an old joke from her father's repertoire. After the revolution, one man wanted to keep his tractor. Well, definitely, he was told, you need that to be productive. Well, if he gets to keep his tractor, I get to keep the silver tea service my grandmother left me. All right, having a connection to your ancestors can't do any harm. Yes, but if she keeps that, I want to keep my collection of art. Well, the commissar said, considering, if you get to keep your art, certainly no one can object if I keep my mistress?

Some of the women came from traditions where jokes were told about the revolution. And of course, you have to be able to hear the irony in the inflections. Different jokes, about different revolutions, with different inflections. Every revolution is felt by its founders to be what will bring us all to utopia.

But you can see where this is going: the tower of babel. Babel! Why bring in bible stories? Our utopia will be spiritual, of course, but have no allegiance to the old myths, the creation myths of any faith that may imply the establishment of priesthood, a high priestess, a pecking order.

Decades go by. The woman who had said – you must not have men in your vision, because that will keep them present and give them power – now grieves the harm she did her son, the breach in their relationship she can't fix, although like a house with earthquake cracks from a violent wrenching of the foundation, the cracks may be spackled, sanded, painted over.

Was she wrong? Probably not. Mark this carefully: the zealotry with which we embrace ideals in our youth does not make the ideals wrong, only the zealotry. To be certain that you have the one true answer is another form of hierarchy, isn't it? Over and over everyone wants to say: I win! And why shouldn't they want to? No TV show is called: Share your fortune!

Once she had a lover who worked in nursing homes for a living, changing bedpans, trying to be gentle with people who didn't remember her from one day to the next. That woman said, "you and your revolution! I bet it happens the very day I can afford a color TV and you'll come in here and say, 'no TVs in the revolution.'"

We have to live real lives. But what that means is the ones who have resources, money, retirement plans, pensions, parents with property, will have more comfort at the end of their lives, even though those ends will be in isolation. Now we have the phenomenon of lesbians going back into the closet to live in nursing homes. (We always had that, an ancestor mocks, only you were too young, too wrapped up in your utopias, to pay attention.)

The intersections of class, race, femaleness whipped our backs and we carry scars from those lashes. (14 out of 15 university students do not know what self-flagellation means – half of them will guess: something to do with farting? – but never mind.) We want to rest, go to the movies, out to dinner, for a swim. We want to soothe ourselves because we don't know how to make a different world, or even change this one.

She is trying to remember what Monique Wittig said. But even that act places her in a certain time and race and class. The first schism was between those who wanted to be mothers and those who wanted to be wild daughters – who turned their backs on motherhood, which ties women to place, to a particular neighborhood, to the enclosed city that can be defended. The wild women wanted to be unencumbered, able to jump on their horses and ride all night, sweating under hot moons.

This makes her realize that visions of utopia are land-based. We must find a place for this to happen, mustn't we?

Can utopia happen in our minds? In our actions?

Many, now many years ago, she had seen a video of Ti-Grace Atkinson's hands demonstrating what happens when a peaceful community separates itself from the world. Bang! In come the un-peaceful ones and wipe it out. Ti-Grace had phenomenal hands - fingers almost too long for a concert pianist, but certainly as expressive. Most of you reading this will not remember her, an early feminist theorist.

She has found that even most of the big-shots, the published women who were famous to her, are swallowed up by time. Their names, their specific accomplishments. Close to a hundred percent of those whose names persist are men (and the women we remember are so often held up as examples of what not to be – the vanquished African gorgon, Medusa; the suicide, Virginia Woolf; that poor obscure spinster, Emily). To last in time, we have to change our sense of being in time.

Oh, she thinks: yes. We can make utopia in our minds. We can envision ourselves as neural networks, as sparks traveling within each other. We can say how I treat myself builds or damages other women's strength. How I treat other women builds or damages me. We can take this up not as an obligation – oh damn, one more way I have to be a good girl – but as a secret thrill. An open heart can make you dance in your mind, sending paper cranes tattooed with encouragements across all the divides.

Most women, hell, maybe even many men, have inside them a sense that at some point in time, everything was different. People cared about and treated each other with respect. In times of famine, no one hoarded. In times of feast, all were included in the celebration. Those who could not walk wove baskets and were carried to the next encampment. Those who could not weave told stories. Everyone had a home. Those who did not want to be at home were free to leave. And return.

Nature is violent, a friend says. You make up fairy tales. Human beings were violent in their evolution – they killed each other three thousand years ago, they ate their young. Only the weapons change. Maybe so. But maybe always violence is a choice. Not some stain in our blood, some imprint in our DNA, but an impulse we can harvest, as we harvest wind. That angry, bitter, disappointed, betrayed-so-deeply-that-I'll-kill-you energy – can't we learn to recognize it and reshape it? Make it work for us? (Utopia can be in your mind. Even you who feel lonely, passed over, unappreciated, uncared for, who writhe in the debris of the last century.)

We are experienced. We are many women who have lived lives with minimal attachments to men. We have created a thousand programs over the last thirty years to help each other, to show our lives and to speak to the ones coming up next. Our minds are strong, our wills ferocious.

Is utopia possible? We move towards it every time we choose to share. We shape it every time we argue about how to deal honorably. We make a commitment to it when we examine our prejudices, the ways we guard ourselves in reaction to our fears. We create it every time we ask the question and listen to what anyone has to say.

Late afternoon sun is shining on green leaves that chatter on their stems in a strong wind. I am not trying to salvage a ruined garden in Gaza while my family is starving. I am not cradling the body of a ten-year-old girl caught in gang crossfire in the Oakland flats. I am no longer a teenager feeling trapped by gender expectations, not knowing whom to talk to or whom to believe. No way can we buy an island and sail off to build our perfect space. We have to develop trust, open hearts and an encompassing vision in the spaces where we live. Can we make utopias? Whenever we can think, whenever we can listen, we must continue the attempt.

Because the alternative is to accept being trapped here, where Israeli commandos slaughter peace activists on boats bringing humanitarian aid, where oil companies and governments collude to look the other way wherever a profit can be made, where prisons are the biggest economic enterprise of California.

We have to imagine ourselves out of this place. We have to reach for the moon. 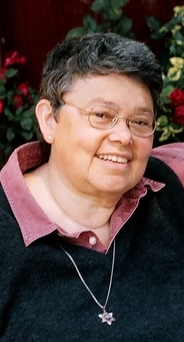 Elana Dykewomon has been a cultural worker and social justice activist since the 1970s. She was the 2009 recipient of the Duggins Outstanding Mid-Career Novelists' Prize. Her seventh book, Risk (a novel), from Bywater Books, was a 2010 Lambda lesbian fiction award nominee and her Jewish lesbian historical novel, Beyond the Pale, won the Lambda Literary and Ferro-Grumley lesbian novel awards. Dykewomon was editor of the lesbian feminist journal, Sinister Wisdom, for nine years; co-coordinated disabled and senior access for the San Francisco Dyke March until 2010; teaches literature at SFSU and offers private creative writing classes and editing—see www.dykewomon.org. She lives in Oakland, California with her partner, Susan, surrounded by friends, stirring up trouble whenever she can.