There she sits on the dead tree,
black against the gray-pink clouds
as men gather to capture God
and confine her to a small preserve
out of our sight.

We know her best through legends
that say when all others failed,
this Great Mother pressed her forehead
against the sun,
pushing it against the sky
to save the earth from burning,
and so carries that mark
that red, bald head forever.

It is said
that when she cannot find
the dead to feed the little ones,
she will, like the pelican,
open her thigh
with her rapier tongue,
with the gentlest lick
slice skin, flesh, muscle
to offer her blood,
to those who will someday
be called to share her glorious fate.

The sun illuminating the southern limbs
has turned the dead tree on the mountain,
rising above all others,
into a fiery signature
where this vulture,
the great condor,
with the wingspread of an angel, sits.

She is not poisoned by the dead;
What we must not eat,
she eats for our sake.
But she is poisoned by our poisons
that twenty years ago took all her people,
save three, to the grave.
And still she comes to live among us
though it may kill her and all her young again.

I did not think such medicine
would come to me as a sign.
I say her name,
Mut, Great Mother,
Maat, the Cosmic Law
who weighs us against such a feather.
Racham.
To both the Arabs and the Jews
who war against each other,
she is the Compassionate One,
bearing yet another face of God.

She comes sweeping the sky,
her black feathers signing prayer
as they reach up.
It is my birthday,
The wind hums through the trees;
We call it, ruach,
the breath of God.

Vulture spirit
draws a single circle
a thousand feet above me,
perfect in the blue and gray and azure
of the holy sky; it is enough for me,
to know her from this stone circle
dedicated to the Great Mother,
where I sit praising the old ones,
and singing Blind Willie Johnson’s
rune:  Just God, Nothing But God, Just God,
until it’s time to follow silence.

So the last third of my life begins.
The vulture does not speak, or call or sing.
She is the womb through which we pass.

The sun dissolves the clouds.
As the summer fire emerges,
she turns to face me,
lies down on a branch.
Such a narrow perch
becomes her bed; nothing more required.

It is not for us to say
what beauty is,
but to honor its black feathers
and terrible skull
when she appears.

I take what is given:
the means and measure of the vulture
is my medicine and I praise
the story telling of God.

9/17/99. My birthday. I was 63. I spent the day alone, sitting in a circle of stones at my cabin in Pine Mountain California. Within sight a condor had been perching on a dead tree up higher on the mountain. California condors had become virtually extinct from the detritus of human life, including lead-based hunting ammunition. The few remaining birds were captured with the hope they would mate in captivity and the young birds could be freed to repopulate the mountain range that lies between Ojai and Big Sur. Many years later some of the birds had been released. And there she sat. A sentinel of hope. She spent a long time on the branch of the dead tree but sometimes I would glimpse her circling and circling, higher and higher. She was an awesome presence and I understood, watching her, day after day, why the ancient Egyptians recognized Mut, the Vulture Goddess as one of the great ones. Maat, the principle of cosmic law, also carried a vulture feather. And the Chumash on whose ancient land I was sitting explain her red featherless head as having come from pushing the sun back so that it would not burn the earth. The condor, the great vulture, is truly the great mother.

I had never expected to own a house in these mountains. A student, friend, colleague lived here. I had never been here. One day, weeding among the flowers that she had planted alongside a trail to a small waterfall, her arm broke. Thus she learned she had cancer. When I went to visit her, she noted there was a house for sale next door to her. I had another cabin then on the Mogollan Rim in Arizona, eight hours away. “If you live here while I am dying,” she said, “it would mean a great deal to me.” I sold my cabin and bought a house a few blocks from her. Days before she died, the Condor, the vulture who eats the dead, landed on the dead tree. I called Lisa because she had never seen a condor in all the time she had lived in Pine Mountain. We managed to get her into the car and drive her up to a house near the dead tree. The rangers were protecting the bird, but when he heard her story, they let us drive close to the edge so she could see the bird. She is the compassionate one, I told Lisa. A few days later, Lisa died an easy death.


Suddenly the sky rains gulls.
Pelicans, pigeons, crows, ravens,
hawks dart through our hands
in patterns of flight and wind,
the silver threads of elsewhere in their beaks.
This is the weaving of invisible,
shimmering worlds
into a single fabric of mind.
We call this the
augury of the birds. 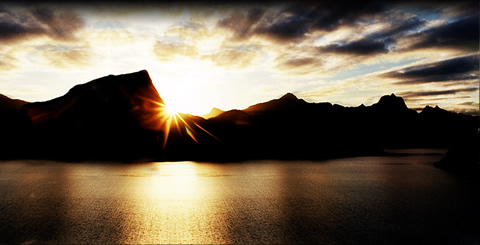 Photo “Norway, Arctic Circle, Summer Solstice” © 2002 Hand to Hand & Deena Metzger. Used by permission.
In 1996, I had gone to Norway at the winter solstice and again at the summer solstice to be in silence for ten days each time to acknowledge becoming 60. When I returned home the second time, I was concerned that I would lose the gift of the ritual time if I simply entered my familiar life. Instead, I enjoined my husband to keep driving when we came to our turn off from Pacific Coast Highway, rather than turning east to our house and we continued north toward Santa Barbara. We stopped at a deserted beach and went toward the water, bread and nuts in hand for the hungry ones. Soon, we were surrounded by birds and I felt reconciled to the hours I had spent on the island of Lofoton watching the birds reel, tumbled and swoop. Those ten days had offered me ways of seeing spirit and the birds, who are seers, reminded me and imprinted the knowledge on my heart.

Deena Metzger is a poet, novelist, essayist, storyteller, teacher, healer and medicine woman who has taught and counseled for over forty years, in the process of which she has developed therapies (Healing Stories) which creatively address life-threatening diseases, spiritual and emotional crises, as well as community, political and environmental disintegration. She is the author of many books, including most recently, From Grief into Vision: A Council; Doors: A fiction for Jazz Horn; Entering the Ghost River: Meditations on the Theory and Practice of Healing; The Other Hand; Tree: Essays and Pieces, A Sabbath Among the Ruins, Looking for the Faces of God and Writing For Your Life. A collection of poetry, Ruin and Beauty, is forthcoming from Red Hen Press in April 2009.