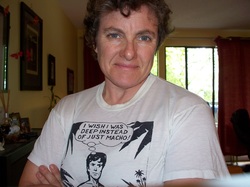 Erin Graham is a no-neck, knuckle-draggin' dyke from the Canadian Prairies. She lives in Vancouver, BC, alone in a tiny apartment, about three miles from her delightful, smart and radical lover and surrounded by lesbians and activists. She goes to a neighborhood gym most days to heave around great plates of black iron and is solid in sobriety. She is a storyteller and a stand-up comic. She still misses the prairie sky—the wide horizon, the endless sunsets, the big vibrant weather. Vancouver's nice and all, but the climate's kind of passive-aggressive, you know? Oh sure, lovely summers, but then come October and 'boom!' pouty chilly drizzle all winter long. Ah well. You can ride a bike all year anyhow. She's wrapped up in Vancouver, there's the PhD in progress, the wide, wild network of friends and allies, lovers and ex-lovers, the history she holds now—but every time she crosses the mountains, she sheds her city skin and dives into the sweet-smelling feel of home, where she first decided that she would become a feminist and a lesbian, where she first learned the songs. And where she first heard the stories about those radical Vancouver women (of whom she now IS one. Lucky woman). Life is a big circle. She still works to end violence against women and her present focus is on working to abolish prostitution. Her PhD work, that thing that takes up most of her waking hours (and many of her sleeping ones, too) challenges the increasing pathologizing of women in prostitution and the medicalizing, normalizing approaches now known as "harm reduction" directed toward them.