A Review of Donna Prinzmetal's Snow White, When No One Was Looking
Carolyn Martin 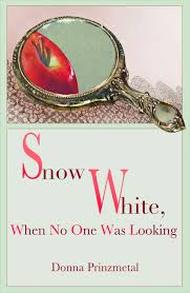 ​Reading Donna Prinzmetal’s collection of persona poems, Snow White, When No One Was Looking (Cincinnati, OH: CW Books, 2014), is like falling down a rabbit hole and landing in the midst of a Salvador Dali painting. While her fairytale heroine has been part of our collective consciousness for generations – from the Grimm brothers to Walt Disney to ABC’s Once Upon a Time – no one has ever met a Snow White quite like the one Prinzmetal creates. The poet invites us into the surreal inner world of this iconic heroine with language and images that are fresh and astonishing. In the process, she ensures that we will never look at this fairytale the same way again.

First of all, the foundation of this collection is built upon the original Grimms’ fairytale. The three sections dividing the poems – white as snow, red as blood, black as ebony – reference the qualities Snow White’s birth mother wished for in a daughter. She got her wish but died in childbirth, thus setting the stage for the appearance of the evil stepmother, the compassionate huntsman, the protective dwarves, and, of course, the Prince.

But that traditional foundation begins to crack from the very first poem when Snow White announces, “I gotta tell you folks, I’ve been around the forest a time or two. Hold onto your flying sombrero because my America, the black forest, isn’t what you expect” (“Everyone Loves a Happy Ending: Snow White Has Her Own Show”).

From that moment on, we hear a voice we’ve never heard before; and every plot line, theme, and character we thought we knew in the fairytale is blown to smithereens. As Snow White proclaims in “Snow White Sets the Record Straight”:

It didn’t happen like everyone believed, in black
and white, dwarves in the cottage, a tsunami loose
in my body, then
unquenchable silence into my clear coffin sleep
while you were brooding over me … .
I never meant to start my own rumor.

Undoing that “rumor” is the driving force behind each poem and Snow White is securely enthroned in the driver’s seat.

For example, Prinzmetal’s Snow White is a time traveler. She doesn’t merely reside in the fairytale world of magic mirrors, poison apples, dwarves, and crystal coffins but hops into contemporary settings. In one poem she sits in front of a TV watching Oprah and Jerry Springer (“Snow White Watches Daytime TV”); in another she admits, “I’m never on time/I forget my century” (“Snow White Sets the Record Straight”). That statement becomes clearer when we stumble upon her references to Joan of Arc, Debussy, Chopin, Kafka, Errol Flynn, Dali, Charlton Heston, Marilyn Monroe, and Madonna.

This Snow White is a handful for any prince – charming or not – who would attempt to love her. In “Snow White: Taxidermy,” one of several love-themed poems, she says:

Let me confess
the ecstasy was temporary
as a tulip’s bloom.
You would be mortified to know
how often I pretended to love you
in that mango colored tuxedo
you called woe.

And this Snow White is a character both disturbed and disturbing. She wants “so desperately to speak the language/ of the insane without being insane …" (“Snow White Meets Salvador Dali”). She claims, “I am your worst/nightmare” (“Snow White: Ventriloquism”). She wishes to “devour the raw and uncleansed flesh of everyone who has ever betrayed me” (“If I Could Sew: Snow White”).

While reading this collection, I kept asking myself, “What kind of poetic sensibility could have imagined and imaged this vision of this character?” Indeed, the depth and reach of Prinzmetal’s poetic imagination is nothing short of a revelation. Like Snow White, she could tell us, “I am tired of telling the same story” (“Snow White Revises Her Fairy Tale”), yet we feel she never tires of creating surreal landscapes filled with different versions of the same story that haunt and delight, horrify and mystify.

If one of the purposes of poetry is to make us slow down and see the world with new eyes, then Snow White, When No One Was Looking fulfills that purpose. After savoring this collection, we can only admit to ourselves – and to each other – we weren’t really looking after all. Now we are.

Listen to Donna Prinzmetal read two of the poems here:

From 2011-2014, Carolyn Martin served as president of VoiceCatcher, a nonprofit community that connects, inspires, and empowers women artists and writers in greater Portland, OR/Vancouver, WA. Under her leadership, the organization moved from an annual print anthology to a bi-annual online literary and art journal that has attracted more than 30,000 first-time readers during its first three years of existence (www.voicecatcher.org). Carolyn also spearheaded the creation of a community website where women have their voices heard via personal essays and articles of interest to its readership. VoiceCatcher is now celebrating its 10th anniversary and remains committed to celebrating women. As Carolyn would say, "There's nothing stronger than women celebrating women." ​ 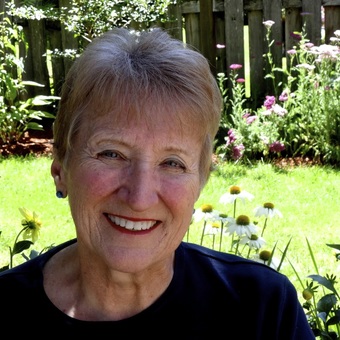 After forty years in the business and academic worlds, Carolyn Martin is blissfully retired in Clackamas, OR, where she gardens, writes, and plays with creative friends. Her poems have appeared in publications such as “Persimmon Tree,” “Stirring,” “Naugatuck River Review,” “Antiphon,” and Becoming: What Makes a Woman. Her second collection, The Way a Woman Knows, was released in February 2015 by The Poetry Box, Portland, OR. ​