A Song of Captain Joan 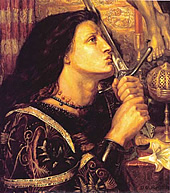 
and for her burning
they dressed her body
in a maiden's gown,
the brave jeanne d'arc --
stripped of armor
without sword or banner
she entered the fire
of the world alone

Note on the genesis and subsequent history of “A Song of Captain Joan,” excerpted from an e-mail sent by Barbara Mor to Harriet Ellenberger, 13 December 2006:

“Speaking of Joan of Arc, one of my first feminist poems was about her – was reading Vita Sackville-West’s biography at the same time I was writing for my first-ever poetry reading (with a group of San Diego women). Sackville-West’s book had trial transcript notes in the original French, so I extracted some of their details; & the English soldier who captured her called her ‘a very brave captain,’ so I was inspired by all this into a sort of ballad, which I sent to Aphra, one of the first feminist poetry/writing journals (this was 1969-70) and they sent it back with the notation ‘Too agit-prop!’”