The Mark of the Bear
Sara Wright

Leaving the sanctity of evergreen forest and still wrapped in winter wool he warily approaches me. I stand riveted to a wet nose and open mouth sniffing and tasting the evening light, the bear’s gaze rekindles an ancient fire. A golden arrow pierces the shadow of my longing, forcing me to acknowledge the depth of my grief. Hungering for details I scan his face, noting his widow’s peak, mole brown - marbled eyes; curved claws pop the top off the can. Recognition parts the Veil of Bears as I acknowledge him. One image of my Beloved is this bear. 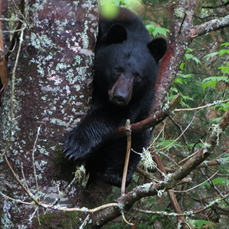 I have one bear, his name is Little Bee and he has been coming here for five years now. I have known him since he was a ten-pound cub, and this year he is 275 pounds of fully grown bear. It is unusual to have a mother bear tolerate an adult male staying in her territory for more than a year. Most male offspring leave their mother’s area the summer the family breaks up, so Little Bee is an exception. I often think that Marie and her kin still tolerate him because he is such a shy reclusive bear who always disappears back into the forest when his relatives are around. The curious part of this story is that as shy as he is, Little Bee is greatly interested in me. He often watches me garden from behind some birch twigs. Sometimes he follows me around the cabin. He is easily soothed by the sound of my voice, and even when frightened will return when I call him back. Last year, he spent most of one afternoon watching me plant beans and that very night he came and dug up a few to eat! Two summers ago I watched him scratch his claws into the two posts on either side of my door. It seemed to me then that he was marking my house. Then he reached up for the bird feeder and left a beautiful muddy paw print on my porch window, which I will not ever wash away. (When he takes a feeder down he never damages it. He knows just how to empty each one – normally I take my feeders in at night and had forgotten!) He has remained a “day bear” even after the last two summers when the constant shooting of semiautomatics and firecrackers exploding echoed through the valley. Bears are normally diurnal but the unpredictable deafening explosions forced the rest to adapt by becoming nocturnal.

Little Bee also lets me photograph him, although he has limited patience with the camera and will tolerate it for no more than a few minutes. He always “hides” behind some saplings or new leaves while he watches me. I am convinced that the two Maries and Little Bee might still be around because they are so cautious. But I never know when fall comes if any bear will make it back alive the next year. Grief is ongoing. Each spring, I wait for bears to return with fear in my heart. This poem was written after my first encounter with Little Bee early this spring. I adore him and do feel marked by the Spirit of the Bear.

[Several days later, via email] I need to include something that happened last night as an extended (mind/body) part of my relationship with Little Bee. I have not seen him since July 17th and at early dusk last night, just hours after I had sent in the working notes, there he was – just outside my back window sucking down seed and fat like a vacuum cleaner.

One way of understanding this synchronicity is to think of Little Bee and I as sharing what Rupert Sheldrake would call a morphic field. This overlapping of human/animal fields stretches around us like a rubber band, and I believe that creative writing of any kind must stimulate non-local communication in this “space in between” and brings us back into the same physical space. Writing about “the mark of the bear” pulled me into ‘our field’ in a very visceral way at a time of terrible grief (for my dog) and my fear for Little Bee’s safety. Although I keep a can filled with food for traveling bears, I am never wishing that they are around; though I know the females with cubs are within a probable five-mile radius. This year, the fall mast (acorn/beechnut) seems inadequate, meaning that these bears may be more vulnerable than ever to the hunter’s gun. 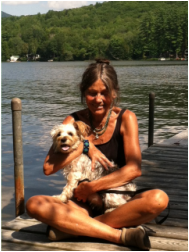