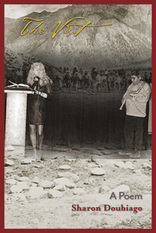 Sharon Doubiago’s memoir, My Father’s Love: Portrait of the Poet as a Young Woman, Volume 1 (Wild Ocean Press, 2009), was a finalist in the Northern California Book Awards in Creative Nonfiction, 2010. My Father’s Love: Portrait of the Poet as a Woman, Volume 2, was published in 2011 (Wild Ocean Press). Love on the Streets: New and Selected Poems (University of Pittsburgh Press, 2008) received the Glenna Luschei Distinguished Poet Award and was a finalist in the Paterson New Jersey Poetry Prize. She has written two dozen books of poetry and prose, most notably the epic poem Hard Country (West End Press, 1982; 1999), Psyche Drives the Coast (Empty Bowl Press, 1990) for which she holds the Oregon Book Award for Poetry, the book-length poem South America Mi Hija (University of Pittsburgh Press, 1992), which was nominated twice for the National Book Award, and the story collections El Nino (Lost Roads Press, 1989) and The Book of Seeing with One’s Own Eyes (Graywolf Press, 1988), which was selected to the Oregon Culture Heritage list, Literary Oregon: 100 Books, 1800-2000. She holds three Pushcart Prizes for poetry and fiction, two Oregon Institute of Literary Art Fellowships, and a California Arts Council Award. She’s published over a hundred essays—from the personal and creative to the scholarly. She is a board member of PEN Oakland. A new collection of poetry, Naked to the Earth, will be published later this year, and a new collection of memoir stories, Why She Loved Him is circulating.

Note: This is an excerpt of a longer interview, which can be read here.

​Julia: Every book you’ve written is part of your epic, your story this lifetime, is about you placed within your family relations, your communities and places, your country, within current circumstances and looking back in time. Each book then, refers to the ones that came before. Your first book, Hard Country, started with you writing the story you already knew and what you were discovering about its greater contexts; you were writing it down. You were writing it down after a long self-imposed silence, the aftermath of your father’s sexual violations and a story you wrote anonymously about it and the academics’ reactions to that story.
[The short story, “California Daughter,” was eventually published in Aphra, New York. Spring Summer, 1976, another first publication, though it was written six years before, in graduate school.]

The Visit (Wild Ocean Press; available from Small Press Distribution) comes after your two-volume My Father’s Love, which profoundly describes the complex contexts—personal, familial, social, historical—of your father’s sexual violations, and of your parents’ and siblings’ fundamental betrayals of your shared truths. An epic poem, The Visit focuses on your relationship with Kha-che-chee/Jack Retasket, Shuswap-Lilloet/Statlmx, who suffered abuse and rape as a child at the Kamloops Indian Residential [Catholic] School, and later, in his 50s, was imprisoned for weakly proven allegations of sexual violations of his girlfriend’s daughter.

Please share your view of how Western colonial, patriarchal culture has fostered and framed male sexual violations. And how your contemplations of indigenous, matriarchal cultures have influenced your writing about this issue.

Sharon: Much, maybe most of our psychoses, especially the commonness of sexual violations, are the result of our Western colonial, patriarchal culture, not as is generally preached and accepted, that, most basically, we are savages/rapists/sinners, that the Church and State “civilize” us; save us from our sins. I see our patriarchy—the State and the Church— at the roots of our profound dysfunctionalisms. The child is conceived inside the woman, matures there, is born to her, is traditionally raised by her. Maturation demands that the child reject her, the mother, and turn to the father, the male. It’s all there in the first story of Western Literature: the House of Atreus. This is the way I put it in the interview that accompanies the book poem The Husband Arcane     The Arcane of O:

…I thought about the House of Atreus…of the killings that just keep on through the generations: Agamemnon tricks his daughter and wife into the sacrifice of the daughter, Iphigenia, so we can have the first patriarchal war, Troy. Then Clytemnestra, the mother, kills him for killing their daughter. And then their son, Orestes, avenges his father by killing his mother, Clytemnestra. This is the root of western literature and our legal system. It’s the same family but it is forgotten, with each subsequent play, what the original crime was. Patriarchal rule is fully established by Orestes’ trial when Athena, daughter of Zeus and presiding judge, declares her verdict: “I am wholly for the male…and entirely on the father’s side.”

Most men are innocent in the sense they’ve accepted their privileges and dominance as being State and God-given; it’s called growing up. Their privileged, patriarchal role frees them, or delivers them to all sorts of sins of hierarchy.

​The psychodrama of the boy born from/to a woman, on whom he is dependent, for whom he experiences first love, but who then growing into manhood learns his primal connection to her is the very thing he must kill, to gain respect, to become “a man.” (Is there anything worse for the male than being called a Mama’s boy?)

Men like to think—well, the men I grew up with and many friends and lovers since—that their role is to liberate women by way of sex. Then to impregnate them and then imprison them and throw away the key (out of their own fear of patriarchy). In a visionary, even love sense, they like to believe that they are the female’s liberator—and then her keeper.

Our legal, societal, religious notions encourage male sex violation. We encourage them to be "men," that is, in some deepest sense, to be rapists. (Apologies for the reduction, offensive and inadequate, but just think of this for a minute!) Why are men sexually attracted to children? Violating their own children is affirming as positive what was done to them, their own rapes. Violating their own children is affirming their manhood and their own fathers; it's finding primal connection equal to the mother's.​

SHARON: After the publication of The Visit, Julia conducted this interview with me by email. I was happy to cover more of the issues. Oregon’s governor, Kate Brown, the first openly bisexual governor, has signed the proclamation releasing Jack Retasket from Two Rivers Institution back to Canada (to a prison). We await this move. The Truth and Reconciliation Committee, so moved by his testimony those six hours at Two Rivers, is taking it to the highest judiciary level.

JULIA: As I said in this interview, Sharon encouraged my writing at a time when I questioned whether to keep focusing on it. We subsequently have worked together: I’ve edited her writings and she has over the years continued to encourage my writing. We have often discussed the options for publishing and self-publishing, and those routes have certainly changed over the years. As ever, I have primarily self-published and she has published in small presses. 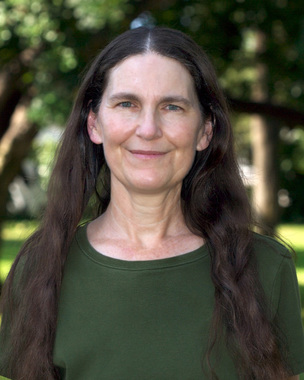 Her plays have been produced in San Diego theatres, including The Fritz Theatre, Studio 856, The Bowery Theatre, and Sushi Performance Gallery.

She was editor and contributing writer from 2006-2011 for Ensemble Jourine: Art and Hybrid Writing by International Women, and Ensemble Antholozine/Anthology. You can find her current chapbooks here.