Worker honeybee on crocus
Hot summer nights in upstate New York in the late 1970s were made more bearable by trips to the drive-in movie. Family movie night, Mom’s Charlie perfume wafting through the car, Dad opening another can of Genesee cream ale, grubby hands reaching into brown paper bags filled with homemade popcorn.  Windows down, bouncing over rutted fields in the red paneled station wagon, backing into the spot next to a speaker, flipping down the back door, spreading out blankets and pillows and settling in for a movie. Smokey and the Bandit sequels galore—Sally Field, Burt Reynolds, Dom Deluise.

Once, when we arrived to a later showing, there was not the typical family friendly flick– instead, a killer bee movie!  My brother and I begged to stay and predictably regretted it once the first 15 minutes established what was to come. Peeking through our hands, bees invaded, swarmed, stung, and killed.  They were unstoppable, traveling across oceans and continents to ‘get us.'

Back home, other summer nights were perfect for made-for-television, movies-of-the-week about killer bees, daring me to watch them while babysitting my brother.  At night, alone in the house, I clamped the storm windows down tightly sealing our house.  The next morning, my mom complained about the stuffiness—clearly, she did not understand the craftiness of bees when they thirst for the kill.  Obviously screens are no barrier against these killers, and I’m not sure if she knew I had also closed the fireplace flue.

The titles of these movies from another era indicate the attitude then associated with the insects: The Deadly Bees (1967), Killer Bees (1974), The Savage Bees (1976), The Swarm (1978), The Bees (1978), Terror Out of the Sky: The Revenge of the Savage Bees (1979).  Bees, traveling from South America via Mexico and originally from Africa – were lethal, and news stories confirmed they killed dogs and children.  I imagined them crawling all over me, stinging.  Writhing as the swarm covered my entire body, in my mouth, my ears, my nose.

So it makes sense that when a “beehive” was identified in between suburban yards that summer, the unsupervised neighborhood boys spent a few days throwing rocks at the colony, girls witnessing from the periphery.  As is usually the case, gangs of bored children were unsatisfied and things escalated to long sticks poked into the enormous grey hive high above the ground.  We were furiously dedicated to creating spear-like sticks, which we called ‘javelins,’ made pointy and sharp by friction, rubbing them on blacktop.  The girls took the role of javelin sharpeners.  Fingertips were worn down as we frantically attempted to make the sharpest tip.  One very aggressive lancing brought the hive crashing to the ground.  Angry bees came flying from the smashed up hive, drilling into the group of screaming children.   Frenzied, I quickly made it to the family room first and manned the sliding glass door to let in my screaming friends.

Thinking that we were all safe, I decided to lead a team to inspect the hive.  “Maybe we should use the hose to douse the bees with water,” I suggested.  I reviewed the plan with my crew and pulled the door open.  My shrieking brother fell into the shag carpet clutching his eyes.   When I pulled his hands from his face, he looked as if he was pulling back his eyelids.  The swelling was immediate and I feared that the venom would kill him instantly.   The killer bees had gotten him.  He gasped for air.  I screamed for my mom and we piled into the station wagon to race my brother to the hospital.  Once treated and released, he was diagnosed as allergic to bees and gravely warned of future threats from bees. From that moment on, he became one of the elementary schoolchildren who immediately were ushered out of the classroom once a bee entered.  He had to carry medication in case of a sting. 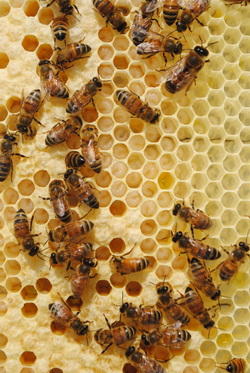 Frame of bees
As an adult, I know now that those ‘bees’ were actually paper wasps.  Bees are often mis-identified and all flying, stinging animals are generically called ‘bee.’  But what is striking to me about my beliefs about bees is how much my animal ‘instinct,’ fostered by bad movies and crappy TV shows, has been about reacting from a place of fear.  My instinct, fueled by other agendas set by pop culture and parents, was to kill, harm, or injure the bees.  Even though I had never been stung as a child, I swatted, shrieked, and sprinted with the best of them.  Little did I know that one third of my food was pollinated through bees’ labor, life was made sweeter through their hives, and beautiful flowers flourished under their diligent work.

It is the memory of these bees that has come back to me as I have worked on this issue of TRIVIA.  A feminist-in-training in the 1970s, I was increasingly drawn to bees as I aged. They are a female dominated colony of communal living, dedicated to a sacrificial existence for the greater good of reproduction. Similarly, the important work of reproducing feminist inspired poetry and prose take a colony of dedicated women.  And yet, there is so much misinformation about animals and women and girls.

Thinking about it now, it is precisely these types of experiences with animals and of being human that inspired me to work on the theme of “Animal Instincts” for TRIVIA.  I want to understand how ‘propaganda’ or misinformation about a group of animals elicits hostile reactions that lead to negative outcomes. It had happened for me, so I wondered: what were the experiences and stories of others?  How do others make sense of their own animal instincts and their animal engagements? My feminist education, including decades of self-reflexivity, trained me to explore and analyze my reactions to differences.  I have worked to critically examine my own racism, my class-based biases, my ablest presumptions about space and place, all my privileges and immunities.  However, it is only very recently with publication of my co-authored book, Buzz: Urban Beekeeping and the Power of the Bee, that I have been able to consider my human exceptionalism and how my own animal instincts, as a member of the human species, reinforces speciesism in my everyday life.  Speciesism is the belief in the inherent superiority of one species over others – confronting speciesism makes investigating our ideas about “Animal Instincts” a feminist concern.

It has truly been a joy to work on this issue and to curate the poetry, fiction, creative non-fiction, and visual art presented here as feminists engage in various ways with non-human animals.  What is it to consider the everyday interactions we have – lyrically, politically, and spiritually – with non-human animals?  How do these reveal the limitations of our own humanism?  How do our animal instincts – our drives to control, demand, kill, ‘protect’ – limit our ability to entwine, celebrate, see, and appreciate?  I believe feminists are uniquely situated to reflect on the complexities of the trans-species relationship.

The pieces collected herein express feelings of fear, loss, grief, aggression, passion, and desire. The non-human animal, as a feminist muse of sorts, enables poets and narrators to wrestle with crafting poignant representations of others and selves.  Our lives intertwined with birds, fish, snakes, bugs, and other animals are brought into view, reminding us of the peaceable (and not so) kingdom. 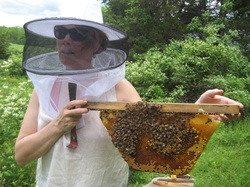 Lisa Jean doing fieldwork
Lisa Jean Moore is a feminist medical sociologist and Professor of Sociology and Gender Studies at Purchase College, State University of New York.  She lives in Crown Heights, Brooklyn with her husband and their three daughters, ages 15, 12, and 4.  They share their home with two rescue dogs and a beta fish--and probably several thousand ants, roaches, silverfish, flies, and other animals.  Her most recent book is Buzz: Urban Beekeeping and the Power of the Bee.  She is wildly excited about beginning a new research project on Limulus, also known as the Atlantic horseshoe crab.