I.
Dear Mom, I was shocked when we
finally got here. Can you imagine
women wearing veils, white cloth
covering their entire body? Oh not

every woman, but many. They tie
white hanky-like triangles real tight
across their faces to hide noses and
mouths. The women look beautiful.

You can see eyes above the aadjar––
dark, luminous eyes outlined with kohl.
Younger women lift their haik way high
climbing onto buses. You can detect

mini-skirts, Parisian shoes. Mom, I'm
not sure I have the guts to wear the haik
in public. B's sister wants me to just
for fun. What a trip that would be

on Saturdays, for example, getting on
the bus with the two large straw baskets
I carry to the central outdoor market,
Marché Clauzel. It's off the main drag,

rue Didouche Mourad, rue Michelet
before independence. Mom, I know
you don't eat shrimp, but they sell
the most gorgeous plump, reddish-pink

shrimp I've ever seen. The vendor dumps
them on the scale then squeezes them into
El Moudjahid, the daily newspaper. I also
buy fennel––sort of a sweet celery––

and tomatoes and mandarins. Also simple
hamburger meat freshly ground on the spot.
There's no packaged meat here. It's tastier
than our meat. You can even buy hamburger
​
buns at Régina Bakery. When you come,
you'll try their baguettes––best in town.
And coca d'Alger––mini tomato-onion
pies. Can't wait for you to buy your ticket.


II.
Why did I resist the covering,
wearing the haik in public,
daring to discover how it felt,
what the advantages were,
like not being hassled by men,
though I never was, learning
early on to keep my eyes
focused on the pavement
or straight ahead? Rubber-
necking spelled trouble, that
oeil américain, American eye,
that left no doubt as to country
of origin. And vulnerability.
Keep your eyes to yourself.
Think Paris métro, riders
staring into nothingness,
at a book, a newspaper, or
today, a phone. For sure,
I was judgmental, uptight.
Too young to glean nuance
between culture and
liberation. Yesterday, I read
that Algerian women are
demonstrating. They want
to return to wearing the haik.
They want to shed the hijab and
niqab, non-native Algerian garb.

How dramatic the world has become.

I thought I was pregnant
I'm not
The clinic wasn't great
I won't go into detail except
to say the water had been cut
I'm irregular again    haven't
had a period in two months    not
unusual given this different
life    What's unusual is a couple not
to have children    It's about
time now    Is it B's fault
or mine?    He's worried    I don't
know if the family is upset
talks behind my back    Weren't
you thirty-six when I was born?    That
was after thirteen years    They cut
the water in the apartment
last week at four every day    It
gushed back at six the next
morning    The tub and bidet
have become jerrycans    The conduits
and pumps are old    inadequate
No upgrades since the French left
during the Revolution    The city not built
for so many millions    I can't

I hadn't expected this. But what
if I had been prepared for Yasmine?

It seemed as if she were about to touch
my face. Instead, she palpated my right

breast. We were not alone. Four sets
of male and female eyes showed no

surprise. My fully-clothed breast held
its breath as she announced ilha, ilha.

Four heads nodded in rhythmic accord.
They knew the prophecy of ilha, ilha.

I intuited the Berber, the gesture.
The sea knelt on white sand, exhaled

ayefki would flow after childbirth.
No eyelash flickering that afternoon.

aplomb. The North African sun splintered
its similes over the Ravine of the Wild

Woman, the sea of Camus, the Casbah,
the mosques. My body stiff as naïveté

would permit. Still as Saharan rock art
on Tassili-n'Ajjer, plateau of rivers.

Yasmine's touch engendered anticipation.
But my breasts yielded no obligation.

We waited for another spin of Algerian
spring. My breasts fasted, they waited,

they ached. Heads rocking to the drift
of the sirocco, echo of versets, dazzle

of turquoise. Yasmine squeezed again
and again. But vision and rhythm don't

always jibe. The sea turned away.
My breasts and I returned to L.A.

These two poems are part of a chapbook manuscript, The Far Side of Gibraltar, about my years spent in Algiers, Algeria. While I usually like to write in form, these poems just wouldn't let me structure them as such; it seems they wanted to be free, liberated, like the country itself which is the backdrop for the manuscript. The letter-writing helped to free up the flow of the memoir, but I am still striving for a more lyrical approach. Ironically, the two poems selected by TRIVIA revolve around strict culturally-bound practices, a form within a form so to speak, but which require a good amount of distance in order to be fairly interpreted and understood. This distance is perhaps the contradiction between "culture and liberation," how this space impacted radical experience for me as well as for the newly independent nation. 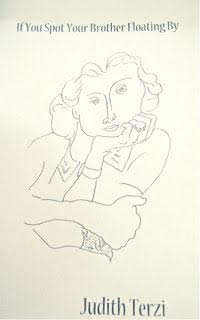