The Poison Our Grandmothers and Mothers Drank

2002 - Dream: I am surrounded by my grandmother, my mother, and other indistinct female figures. They are dressed in ceremonial blue and white tunics and we are pressed together on the concrete walkway outside the second floor of my Oakland apartment building.

I pay attention to my dreams. They are a night rhythm that feeds my waking life. I record them, honor them with titles, and pour through pages of old dream journals as if meeting cherished friends. While visiting an art gallery in Pittsboro, North Carolina, Sharon Blessum’s “Medicine Women” photograph brings back a significant dream to me that has taken years to reflect on and absorb. It is so clear in my memory.

There is a hush and I am given a chalice. My grandmother, whose husky voice is just as commanding in the dream as it was in life, tells me to drink from it. I do not want to drink it. I know it is poison. I am upset in the dream and try to push the chalice away.

I search for the precise description of the dream, knowing it is buried somewhere in my twelve journals, which chronicle my move from the west and much of my eight and a half years in North Carolina. After upending my already disorganized office, I find the journal with my first recollection of the dream. And luckily, just a few pages after the entry, I see my notes from the therapy session where I first discussed the dream with Ruth, a skilled Jungian psychotherapist. When I read my entry, however, I am crestfallen because there is a gap between what I initially wrote about the dream and how the dream exists in my memory. I struggle to make sense of the differences.

Journal entry scribbling about the dream: "Dreams –active. Grandmother + mom-me drinking witch hazel—medicinal? What does that do? Remember this fragment the best."

The detail of witch hazel surprises me. The sharp smell of witch hazel has faded from my memory of the dream. Why didn't I remember that witch hazel was what they offered? I know witch hazel well. In my mind's eye, I see the tall bottle's red and black label. My mother used it for everything, just like other poor urban women did in my neighborhood. She sprinkled it on cotton balls and rubbed us down with it for fever, or to take the sting out of a bruise, or as an astringent to dry up a pimple. I wonder about the symbolism of witch hazel, as I know it is a significant medicinal plant. Nothing comes to me.

Not satisfied with the brevity of the journal entry, I consider if I might have combined this dream with another. No, I assure myself . . . that is not right. This is the written aspect of the dream, a fraternal rather than identical twin to the one that lives in my memory.

My mother, small, nut brown and steadfast says I must do it. I must drink it even though I feel I will die. A sense of obedience and loyalty washes over me. I defer to them. My inherent trust in them sustains me as I drink the poison.

I read on to the entry from the therapy session: “Ruth said I got a trigger [about] the ‘witch hazel dream’, [and] that I was interpreting things so literally—but it's about the dark feminine, the transmutation of the woundedness of these women that can pull you down into something else--by my own 'psychic witch'-old knowledge-ritual. And it is tough—and it is strong medicine.”

I drink the poison and I am dying. I shake and tremble . . . It is a terrible agony.

I was never fully satisfied with Ruth's interpretation, though I could not come up with a better one at the time. Years pass and my time becomes laser focused on planting roots after a cross-country move, navigating my partner’s lonely road of depression, and establishing myself as a published scholar.

I return to California in 2006 and meet Barbara, a friend from my first job as a professor at the University of Nevada, Las Vegas. We visit Kabuki Springs Spa, a Japanese style spa in Japantown, San Francisco. For all my outward bravado, I am a little nervous and shy about going to a communal spa where nakedness is the norm. We have chosen a day when it is all women and I am grateful. We beeline it to the sauna and then lay around with cucumber slices on our faces.

I talk about my new life at the University of North Carolina-Chapel Hill. I talk about how it feels to work with so many first generation African-American college students and the nonstop mentoring that I am doing. I share with her how black students trust me with their deepest secrets, regrets, and triumphs, how hungry they are to see themselves reflected back to them, and how I was probably one of the few black female professors they would ever have in their college experience.

I confide that I swallow daily doses of ambivalence about academe, but that I also feel needed at UNC. How could I help others if I wasn't in a position of security? Indeed, when I made a casual remark to a black female student about maybe not staying for tenure, she held my gaze and said, “Dr. Berger, you have to get tenure. We need you.” At that moment, I felt the groping of a collective unseen “we” that reached out past their immediate needs and wanted to engulf me.

I share all this with Barbara – and also my fruitful and very satisfying budding work coaching and lecturing on women and creativity. There was something about being naked, wrapped in a towel, sweating, and surrounded by other women that encouraged a recall of the “drinking poison” dream. I talk with Barbara about the dream and am suddenly reminded that my grandmother used to read five to six newspapers a day and loved the written word. She had entertained high aspirations of becoming a journalist (already in full bloom in adolescence as evidenced by her securing an interview with Harlem Renaissance notable Countee Cullen for the high school newspaper). However, she found it impossible to give her gifts to the world because of her skin color and sex. I think of my mother, a frustrated half-trained modern dancer, who experienced a lifetime of “no” and the slow grind of poverty, abuse, and alcoholism. As a biracial woman and historian, Barbara reflects on her choices and challenges at UNLV.  In our conversation, I feel as if I am on to something about the dream – that there is a lot of poison out there that “women of color” wind up swallowing.

In another journal, I spy some notes taken right after my visit with Barbara. They point to a way of understanding the dream that I had overlooked:

“The act of offering and drinking the poison that my grandmother and mother initiated me into was an alchemical process.  It was not meant to literally kill me, but to help me to become conscious of the nature of challenges that others and I face. Such recognition unleashes the power of authentic awakening.”

As I see how my life has unfolded in North Carolina, I now believe that the dream gives me insight in how to help other women – especially women of color – recognize the “poisons” they face in their lives. Racism. Sexism. Dispossession of spirit. Erasure. Poisons that are so eagerly offered to them in society. I can support other women to transmute society's poisons into a greater transformation of the self.

The poison does not kill me. I stand shakily and meet the women's eyes. My vessel is stronger than any poison. My luminous body lives. 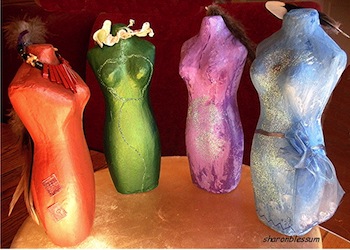 During Fall 2010, local writers were invited to visit the Joyful Jewel, a gallery in Pittsboro, North Carolina and see which piece of art inspired them to write.  My piece was inspired by Sharon Blessum’s photograph “Medicine Women.” In the photograph, there are four small iridescent torsos of mannequins with names like Copper Shaman, Shaman of the Heart Chakra, Shaman of the 7th Chakra, and Water Shaman. Some of the torsos have feathers sprouting from the backs of their necks and others showcase big chunky necklaces. In December, the Joyful Jewel hosted “Visions and Voices” where writers were asked to read what they wrote after their visit and the corresponding artists were asked to display their objects and say a few words about the art-making process. 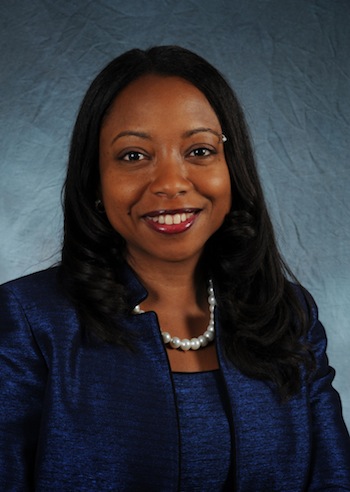 Michele Tracy Berger is associate professor in the Department of Women's and Gender Studies at the University of North Carolina, Chapel Hill and adjunct professor in the Department of City and Regional Planning. Her books include Workable Sisterhood: The Political Journey of Stigmatized Women with HIV/AIDS (Princeton University Press, 2004) and the co-edited collections Gaining Access: A Practical and Theoretical Guide for Qualitative Researchers (Altamira Press, 2003) and The Intersectional Approach: Transforming the Academy Through Race, Class and Gender (University of North Carolina Press, 2010). Transforming Scholarship: Why Women's and Gender Studies Students Are Changing Themselves and The World is her most recent co-authored book (Routledge, 2011). Her teaching and research interests include multiracial feminisms, qualitative methods, and HIV/AIDS activism.

Her creative writing has appeared in The Chapel Hill News, Ms., The Feminist Wire, various zines, and Western North Carolina Woman.  She conducts seminars on women, leadership, and creativity and maintains a blog about the everyday practice of creativity.