Coming Out of the Straitjacket: Sapphism as Creative Space

Monica Meneghetti
Are lesbians going extinct? That depends. What do you mean by "lesbian"?

If lesbian = a woman-loving woman, then - No. We have always existed and will always exist.

If lesbian = an immutable label that prescribes and proscribes behavior rather than describes it, then - Maybe. Deborah Yaffe wrote: "What for me was a lifeline to a wider, brighter, more meaningful world is for them a conservative (that is, middle-class, trans-phobic and dedicated to policing essentialist boundaries), boring, meaningless straitjacket."1 I resonate with Yaffe's "them." More and more often, I meet women who identify as queer or gay in order to distance themselves from that very conservatism. "I don't want to pick a label" has become a common refrain.

I've witnessed many acts of censorship and overwhelming pressure toward normative behaviour within the lesbian community. Anyone who criticizes seems to be considered a traitor. But:

The most undesirable and indefensible forms of modern society are those in which centralized planning is imposed, and dissent is disallowed…Therefore a society that allows critical discussion and opposition (what Popper calls an "open" society) will almost certainly be more effective at solving the practical problems of its policy-makers than one that does not.2

The conclusion follows philosopher Karl Popper's observations on a closed society's tendency toward extinction. We'd be foolish to think that this would be borne out in many societies yet not our own.

If lesbian = a cisgendered woman who loves exclusively cisgendered women, then the answer is also - Maybe. Gender-based definitions of sexuality are increasingly problematic. As Margie Adam writes:

With the advent of queer studies and a more complicated assessment of gender, there is no longer agreement about what the word 'woman' means, let alone 'lesbian.' Some male-to-female and female-to-male transsexuals identify themselves as women; some identify themselves as lesbians. In the 70s, Alix Dobkin wrote a song with the lyric: 'Any woman can be a lesbian.' Can a man?3

Further, definitions based on binaries create false dichotomies. But eschewing binaries is difficult: North American society loves the either/or and ignores the both/and. Labels can't encompass human complexity. "The problem with any ascribed and adopted identity is not what it includes, but what it leaves out."4

Still, we need to have some way to describe ourselves that won't require a four-hour conversation. And so, we continue to struggle with language and its mercurial relationship with meaning.

In their anthology PoMoSexuals, Carol Queen and Lawrence Schimel offer an alternative to binary, gender-based definitions of sexuality: post-modern sexuality, or "pomosexuality."

Pomosexuality lives in the space in which all other non-binary forms of sexual and gender identity reside - a boundary-free zone in which fences are crossed for the fun of it, or simply because some of us can't be fenced in. It challenges either/or categorizations in favor of largely unmapped possibility and the intense charge that comes with transgression. It acknowledges the pleasure of that transgression, as well as the need to transgress limits that do not make room for all of us.5

If lesbian = a meme that continues to evolve, then extinction is much less likely. Trivia editor Betsy Warland encourages openness. "… I am cheering for writing that occupies various kinds of place, that broadens the narrative out into our complexities without defensiveness…"6

Taking a postmodern approach to sexual orientation can be one step toward this expansion. "Postmodern thought… encourages overlapping and sometimes contradictory realities, a life of investigation and questioning as opposed to essentialism's quest for the One Truth, the innate quality, indubitable facts on a silver platter, the answer to everything."7

For example, if the meaning of the word "lesbian" is not an "indubitable fact" then how can we claim to know with certainty to whom the label applies?

The word is, of course, derived from the name of the Greek island, Lesbos, because it was home to the poet Sappho. Today, she is widely claimed as lesbian by lesbians. Yet consider this: neither Sappho's poetic fragments nor the historical record provide conclusive evidence of her sexual orientation. "Since antiquity the biography of Sappho the poet has been pieced together from a fabric of legend and rumors, and from the ragged scraps of her verse."8

This fragmentary historical record leads to multiple conclusions depending on the perspective and bias of the interpreter:

…The various extrapolations from Sappho's fragments resulted not only from a desire to replace what was lost, but also from a confusion, and to some degree a discomfort, with what had survived. Sapphic suppositions mostly revolve around three aspects of her legacy as handed down from antiquity. First, Sappho's remaining poems mostly seem to express or describe love or passion for various female companions, though a few feature men, and still others obscure the gender of the beloved in ambiguous terms. Second, depictions of Sappho in Ancient Greek comedies link her sexually to a large number of men, mostly poets. Third, another widespread legend about Sappho tells how she jumped to her death from a cliff on the island of Leucadia because of her unrequited love for the ferryman Phaon. Hellenists concocted convoluted hypotheses to explain what they considered to be the contradictions in this record.... Writers and academics had particularly great difficulty reconciling Sappho's literary eminence with her reputations for heterosexual promiscuity on the one hand and passion for women on the other.9

The convolutions of interpretation and re-interpretation regarding Sappho's involvement with men seem suspiciously biphobic to this writer, but we'll never know for sure. At best we must concede that Sappho, the iconic literary lesbian, is steeped in ambiguity. Margaret Reynolds, author of The Sappho History, goes as far as to say: The romance of Sappho's fragments has been a part of her attraction from the earliest times. One is almost tempted to speculate that it may be the chief reason for her fame. Sappho, as a result, is not a person, not an oeuvre, barely a name. Instead S----o is a space. For joining up the dots. Filling in the blanks. Making something out of nothing.10

This perspective on Sappho may loosen our attachment to the meaning of "lesbian" so that re-invention can occur. Space evokes freedom. Making something out of nothing is a creative process. What shall we create?

Identity politics. Boundary-policing. They complicate every aspect of my life. Yet, I was surprised when a lesbian invited me to contribute to this literary conversation. I began policing boundaries myself, scanning the facts of my identity: was I allowed into this particular forum?

I'm a woman-loving woman. Almost exclusively, it has been women who have nurtured me in every aspect of my life, so one could also say I'm woman-identified. I am moved by Margie Adam's words: "[lesbian] is a name I have claimed by crawling over the glass of my own woman-hatred and internalized homophobia." My own identity is similarly claimed. Why, then, do I not identify as lesbian?

I also love and embrace men, albeit selectively. Transgendered and transsexual friends and lovers have expanded my understanding of gender so that "woman" and "man" no longer have absolute meaning. My orientation is best described as pansexual and I identify as bisexual. Despite the label's implication of a gender binary, I found home in the bi community because it's aware of, and often sophisticated about, gender identity, sexual fluidity and alternative relationship paradigms. In other words, it accommodates and supports my complexity. If I'd encountered these features in a community labeled "lesbian," would I have identified that way instead?

In lesbian communities, I routinely encountered things that didn't reflect or even accommodate my reality. Gender exclusivity as the sine qua non of belonging. Misandry. Trans-, bi- and heterophobia. Ironically, I found lesbian-identified women who seemed to be closeted bisexuals "on the down low," that is, involved with men but secretly, due to fear of losing their lesbian membership.

However, during the more intense stages of my coming-out process, I was envious of lesbians. To have a local community that would embrace me! To attend events, confident of being welcomed! To be visible! To have the right to marry whomever I chose! There were moments where I longed to be a monogamous, vanilla, butch lesbian. I imagined (how little I knew!) that this would be so much easier. Easier than being who I am: someone whose very existence seems to mystify, annoy, challenge or disturb. I am more comfortable with provoking those reactions than I once was. As Frank Zappa said: "Without deviation from the norm, progress is impossible." 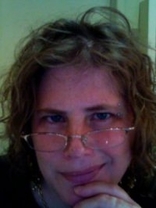 Monica Meneghetti is a trilingual, multi-genre writer and instructor with a penchant for cross-disciplinary collaboration. She's been publishing poetry in literary journals since 1989. Her recent prose is available at CreativeNonfictionCollective.com, in BiWomen (free download), and on Coffee Shop Author under the handle Monmen. Monica co-founded Mountain Pride, a queer networking group in Banff, Canada. She invites you to join Monmen on Facebook, follow on Twitter, or visit www.monicameneghetti.com.