once      his little
babe   an only girl
was perched up high

in her highchair
mouth all over
the place in screams

as her  small doll
a tinkerbell          jostled
about her tabletop

having been pulled
at the string
into song and dance

magazine      mother
was piecing through
around midnight or so

please god let her wake up
​

On the Occasion of My Mother’s Sixty-Second Birthday, November 29th, 2014

​As if sentinels, the holly branches outside my bedroom
window are in full attack-array: Spiny and red. Mother,
it's so peculiar to see how such things can stand, survive,
and even bloom, in the midst of nearly everything
else dying. I have come to see it isn’t the holly’s fault
that it’s best growth comes on when it does. I

cannot know what winter does to most, but I know that I
feel myself flowering sharp and toxic in this very room.
Growing blighted from the beck of your body’s faulting,
it’s hard to keep mine going in this dying season, mother;
it’s not as easy as the holly portrays: as if it’s nothing
to maintain strength or beauty in spite of surviving

what feels like all other life being silenced. Surviving
you cannot be the rest of my life, I cannot succumb with you. I
cannot let what’s left of me become some ill-fated, fatal thing
hidden behind a mask of “I’m fine.” So I must make room
in my heart. Eke out the poison I must give the name “mother.”
Now there are no sorrys. Now neither of us is at fault.

Still, if living is the great task, why, then, is it so easy to default?
I have been too reactionary, thinking I could not possibly survive
past today. In fact it has been the farthest I could see myself, mother,
for months now. Though, I cannot renege all for the sake of a birthday. I
will wait to wake up tomorrow with a blank slate in my bedroom
and hope with all my heart I become it’s chalk. That my life is no thing

that cannot simply be slightly erased and recalculated. Everything
begins somewhere. This can be my new beginning, and if my fault
-line is the mention of your death, or the folly of imagination’s room
to expand you into some ghost or my own wispy shadow; then my survival
will hinge on forever seeing you where you are not. But I
have always known that a daughter only fully succeeds after the mother

has gone. There are too many seasons left ahead, mother,
to think myself anywhere near that goal, but I won’t lie and say everything
that points me there isn’t due at some point to your hands. I,
in the aftermath, have merely twenty-seven years and your body’s faltering
to thank for the “me” the world sees now. Such a marvel! But then, surviving
you was only ever going to be a gamble, if not simply the time and room

to go my own way into the ground. Momma, after surviving
this, I must tell you how strange a thing re-learning to falter
is; how I can see it, bourgeoning the window, just beyond my bedroom.
​

How to Go Through Your Mother's Possessions
​

First, begin with the undying question: How
Did it come to this? Her unfounded by her body;

And you, wading through all that was to remain.
Remind yourself she was more than the empty

Boxes, kept by the dozen; more than her hoard piles
Of college-era love letters and Christmas baubles,

Her predilection to cradle every quiet herald of when
Times in her life seemed more glorious: Photos by the ton

Of California sunshine, in a high-waisted bikinis made for
“Bigger girls;” or sitting on Walt Disney’s desk with a less

Than approving face, and her first hearing aid, on. More than:
All these souvenir key chains and diary entries of family

Road trips across country to grandmother’s house; every
Stuffed animal you ever forgot about. More than: The premie

Onesie, smaller than the length of your forearm, the hospital
Put you in when they took you and your blood-poisoned body

From her belly on that first day of your life. Remind
Yourself you are not alone in this. When her mother died she,

Too, waded. Kept only her mother’s hutch and silver-rimmed china,
The gaudy wedding ring her father gave her mother, for you.

Recall You get mom’s ring now; and, when I die, you get mine.
Recall the moment she did, your blurry-eyed demands for her

Promise, fulfilled. Come back from the memory. Sift more
Through the dust of her. Pull her hair from the brushes. Fold

The jeans she held onto with the hopes of sliding her hips
Back into. Try them on yours. Find stacks of Harlequin

Romance novels and stacks of unlined paper lined by text
Messages you sent her over the span of two whole years, hand-

Written out without her knowing they would transfer
Automatically. Keep them. Dwell, momentarily, in the notion

She may not be gone. Follow these rules to finish the process:
Cry: Make it ugly. Sob: Make it unnerving. Laugh: Out of turn.

Then, decide where to hold her in heaps
Of donated furniture and knick-knacks of decades long past,

In the hot garbage bins accosted by the Arizona sun, or in
what little you will ultimately keep of her life: faux jewelry

And piles of Polaroids. Dwell so in her possessions that you forget
You, too, are another thing that belonged to her. Shake this off.

You are not your mother’s real pearls nor her last book read.
You are a house under construction. You are to call this surviving.

You are to call this surviving her. Start the next room.
​

The Tin Pan
One of my strongest memories of childhood was my grandfather, Llewellyn Bodrero, constantly at his journal. He was so diligent in writing; it was nothing short of remarkable how he chronicled so much of our family history.

As my mother was dying, I spent a lot of time with his journals, reading about my mother’s early life. My mother, an in utero victim of German Measles, was born deaf—although my grandparents did not realize it until my mother was nearly two years old. This poem is built around his journal entry from the evening Time Magazine’s main headline, “Could Your Child Be Deaf?” This article sent my grandfather, a tin pan, and a wooden spoon into a tizzy. The final line of the poem is a direct line from his journals, he spoke that aloud over my mother’s crib before loudly banging the kitchenware above her.

My main goal with this poem, besides honoring a difficult memory in my family history, and for my grandfather, was to give a voice to the confused and silenced infant my mother was, and to the memory of her now that she is gone.

Sestina
This poem was a product of pressure and timing, and one of the first times I allowed my own voice to speak truthfully against the backdrop of my mother’s passing. The date was November 29th, 2014, her birthday, and it had been three months since she had lost her battle with cancer and three months into my final year in the M.F.A. at George Mason University.

After heavily reading the works of Elizabeth Bishop, I locked myself in my bedroom and spent the entirety of the day and evening contemplating a holly tree and the fresh snow on the ground outside my desk window, in addition to all the pain I was feeling surviving her—the sestina followed suit. What is radical, here, to me, is the form—this is the first “successful” sestina I have ever written. I punctuated it heavily with sound and repetition to counter her life spent without sound and to try to rightly translate how interspersed and sharp my grief was and remains.

I left my window open in the recording; the occasional clatter of Puget Sound gale winds in the background can be heard.

How to Go Through Your Mother’s Possessions
A poem that inventories my mother via what I had to go through after she passed. A classic hoarder, it took me weeks (sometimes with crews of others) to clean and go through everything my mother had collected and kept over the years. Every listed item in the poem is something that I hovered over, some of which I kept, some of which I now regret throwing away. Out of everything I transposed following her death, it was the most difficult to write—multiple drafts had my mother’s voice and were all failing—this finished poem only came about when I began to realize that it wasn’t just her material possessions I was wading through, but myself—yet “another thing that belonged to her.”

I still get choked up when I read it. 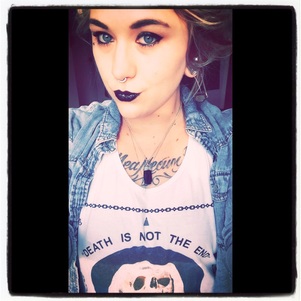 A.k.Padovich received her M.F.A. in poetry from George Mason University in May 2015, where she was an Honors Awardee, Lannan Fellow, and co-Editor-in-Chief and Lead Poetry Editor for So to Speak: A Feminist Journal of Literature and Art. Her poetry has been featured in Beltway Poetry Quarterly, The Phoenix Soul, and Melancholy Hyperbole amongst others; additionally, her chapbook, “Deluge” was a finalist in DIAGRAM’s 2015 contest. This Phoenician-turned-Seattleite believes in the art of being a workhorse, Negative Capability, and that one day “we will journey to the stars.”