I hear the slow dough of hearts
sweating under the strain of war.
I hear the phone on the desk and the furniture changing inside me.

I want the knit cap of the father in all of us.
And the fall in you is here to bring back
summer, a girl you left on

Baby Island, where they teach you to weep, where she is
with boots on the dash holding banana leaves
that fan your moon away.

"Baby Island" is the nexus of a couple of womanly anxieties I was going through last year. Some of these lines came out of an experience with my first and only girlfriend to date. We just broke up and her image kept peppering my thoughts the same week I decided to get an IUD, also a new experience. So, I had woman parts, loneliness, abortion, and forgiveness all rattling around in my brain and it came out this way: a crossroads of two different kinds of death that only women know. The title came out of a comedy scene or a skit, I believe. I kept playing on "baby island" that summer because I worked in a retail store in Park Slope, Brooklyn. The concept was twisted to incorporate the darkness I held in my heart at that time. Love and death and ecstasy always coexist. 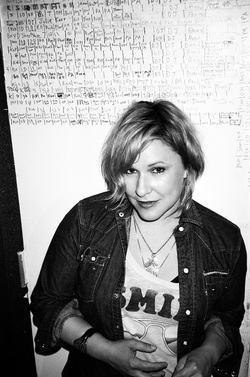 Laura Minor is a Brooklyn-based poet, professor at the Pratt Institute, and singer/songwriter. Her work has most recently appeared in Dead Mule School of Poetry, Sixers Review, Lungfull, JMWW: A Journal of Quarterly Writing, and Mantis/Stanford University. She has released two critically-acclaimed records, and is currently working on a third record, forthcoming in Winter 2013. And she is currently working on a debut collection of short stories.