These scroll works, from an ongoing series, include collage on mylar, cutout images of leaves, as well as rubbed and traced leaves that evoke both a distant ephemeral experience and a personal relationship to nature. They mark time. They move across the page. They fasten a memory, layer and interchange with each other. I have used rubbings of whole leaves as well as fragments of them,
and trace and paint and collage them onto the surface. A few leaves are from the Tuscan countryside but most are rhododendron leaves, from a domestic house plant.

Rubbings and tracings are ancient forms of art making which capture the "essence" or spirit of an object. They record an impression and are made both with water soluble and non-soluble caran d'ache oil pastels on mylar over carved luan (wood) plates. The wood plates themselves are carved in such a way that their Surface resembles tree limbs, trunks, bark, and human forms as well as leaves. 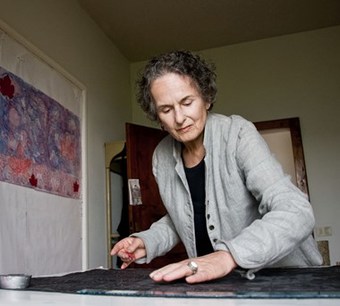 Nancy Azara’s collages on mylar are painted with tempera, marked with pencil, and rubbed from woodcuts with oil pastel. They record a journey of memory, images, and ideas. Recent exhibitions include: Gallery Sensei, NYC; Asya Geisberg Gallery, NYC; SACI Gallery, Florence, Italy and residencies at Bogliasco Study Center and Civitella Ranieri, both in Italy. She was included in the traveling Rutgers University exhibition "How American Women Artists Invented Post-Modernism" 2006, and she was the featured sculptor at the SANYI Museum in Taiwan in 2008. Azara wrote “The Language of Art is Still Defined by Men” in The Brooklyn Rail (Sept, 2014), and her book, Spirit Taking Form: Making a Spiritual Practice of Making Art (Red Wheel/ Weiser).

Learn more about her work at nancyazara.com.