In the distance, across the high desert plateau, the lights of my suburban enclave nestle against the foothills. The lights end where the wilderness begins. Deer and even mountain lion wander down into my neighborhood from time to time. I chose deliberately to live closer to nature and further from the medical center. Tonight, however, I am anxious to be home and the route feels long. I haven’t slept and I’ve spent most of the last twenty-four hours in the operating room. Yawning, I flip on my high beams and accelerate. At this hour I don’t worry about cops or other cars, though a colleague once killed a coyote on this road.  I blink a few times, squinting through the windshield. Sometimes driving home late, when I’m tired like this, I glimpse something - a form, a creature, an ephemeral but dangerous being moving along with me in the penumbra of my headlights. Whenever I take a sip of coffee and look again however, nothing is ever there.

Once home, I strip off my scrubs and head to my garden. The scent of cedar wafts up as I push off the heavy cover of the hot tub. From the scant rays of the porch light, I can see the steam rise into the night air, but when the cover is out of the way I extinguish the light. Now I feel my way back along the patio, towards the invisible heat. I slip out of my flip-flops and robe and into the dark water. It’s too hot at first, but I ignore the burning and let the bath sear the tension of the last twenty-four hours out of me. I adjust quickly to the temperature, yawn and slide down until the back of my neck is cradled against the wooden side and my body is fully submerged. My legs float up and I feel the silky smoothness of the wood bench beneath my bare skin. The hum of the heater pump clicks off and the silence of the night envelops me. The moon has not yet risen and I spot Cassiopeia and Orion’s belt. Mars glows its gentle red, or maybe it’s Betelgeuse. It doesn’t matter. I’m more of a star wisher. Tonight, I wish I could reverse the day’s events.

I close my eyes to the constellations and the image of the bleeding child fills my mind. Just a year younger than my own daughter and still awake and crying when the paramedics wheeled her mother into the trauma bed next to her. I try not to picture the mother’s face, or what was left of it. The police officer involved confided they found four kilos of speed and two automatic weapons in the trunk of the father’s car. His body went straight to the coroner. I’ve seen the damage of methamphetamines and marital arguments turned ugly, but tonight’s horror will not leave me for a long time. I think about the little girl lying in the ICU, each fragile breath supported by a machine. After multiple transfusions, her entire blood volume replaced with that of strangers. I feel confident that she will survive her abdominal injuries, but how will she survive the other wounds?

I open my eyes, repressing the urge to jump out and run naked and dripping into the house to take my own child my in arms. Instead, I look back up at the stars and sink deeper into the tub, the water covering my chin and wetting my hair. I try to relax and float in the womb-like comfort but the weight of my responsibility prevents me from letting go. The mother should have lived too. The ER doc did a heroic job of getting her an airway. Fluids were hanging on the way to the OR and the operation, though complicated, even risky, was going smoothly. Then, in a split second of diverted attention, a moment taken to relax, just to breath, the scalpel slipped. I am a trauma surgeon. Blood should not disturb me, but I am not accustomed to trauma of my own making. A motherless child.

I turn over and rest my chin against my hands on the edge of the tub. My chest aches, as if it were me the knife ruptured. I try to submerge the ruminations, the self-incrimination. What bubbles to the surface instead is the memory of a bulky skinhead whom I had to first operate on, and then later testify against. He beat up his girlfriend. She was six months pregnant, and during the fight she got ahold of his handgun and managed to shoot him in the leg.  They came into the trauma bay together too. The mother-to-be died a few days later from her head-injury and the DA charged him with murder.  I can still see him in his orange prison suit, glaring as I took the witness stand, the muscles of his tattooed arms bulging as he gripped the sides of the courtroom dock. As if I hadn’t saved his leg by removing the bullet and repairing the nicked artery. As if I hadn’t done everything I could for the girlfriend he put in a coma. The judge sentenced him to 11 years. It occurs to me he could be out on parole by now.

A night creature rummages in the compost pile. Peering across the yard nothing is visible, but the grunting and shuffling continue. I sit up, my head above water, shoulders taut. Medical board exams always have a question about a night shift nurse who thinks people are following her, and the answer is always “sleep deprivation”. I know I need some rest.

Eventually a skunk patters out and across the patio stones into the neighbor’s garden, the one on the east side who fires BBs at the local cats and keeps a pick-ax leaning against the fence. Though cordial and polite, something in his manner unnerves me. I’m not sorry he put up a “For Sale” sign last week. I glance towards the house but in the starlight all I can make out is looming silhouettes of the hawthorns planted to shield us from his view. I hug my knees into fetal position, suddenly aware of my nakedness and the blackness of the night.

Though my fingers are turning to prunes from the hot water, the chill I feel deep inside has not thawed. I have to make rounds in the ICU in a few hours, maybe re-operate on the child. I’ll be on trauma call again in two days. Colleagues will scrutinize and criticize when I present the mother’s case during our Morbidity and Mortality Review. Men will continue to shoot their wives, and children, and brothers, and I will have to be there to patch them back together. I might make another mistake. Another mother might die. I let myself sink below the surface, down to the bottom of the tub and sit there against the smooth planks; unsure whether I have the strength to keep on.

When I float back up for a breath the rattling of the metal latch on the gate stops me from wallowing further into depression. My heart rate picks up and my muscles tense. I hear the familiar rubbing and squeaking as something pushes against the gate that has never hung quite straight on its hinges.

I sense an intruder, but I see nothing in the darkness. Silence returns. I want to call out, but my voice makes no sound. A musky animal smell mixes with the aroma of the jasmine wrapping the trellis behind the tub. My robe is just beyond reach. My eyes dart to the deck looking for some defense, but all I find is a small net used to skim leaves out of the water. A crouching figure passes the plum tree on the other side of the flagstones. I become as still as the water and the night air.

I think of my daughter breathing softly upstairs in her bed, my comfortable home built here at the foot of the mountains, my vegetable garden. I think of the other child sleeping in the ICU and my living gained from the violence in our world.  Within the same millisecond that these images rush by, my mind empties from the force of adrenaline in my veins and my body reacts. I rise from the water. I am a trauma surgeon. I am not afraid of blood.

Brandishing the leaf net I step naked and glistening onto the grass, every cell of my body quivering and alive in the cool air. I sense the steam rising off my skin and the presence moving toward me in the dark. A low snarl prickles the hair on the back of my neck and, though I hear no footsteps, the creature is suddenly before me emitting menacing groans. A mountain lion, ears back, tail down stands before me, her muscular legs twitching. Contrary to the all the advice learned from survival guides - make noise, wave your arms, make yourself appear larger than you are and fight- I lower the net, and slouch two steps backward toward the tub, overcome.

The cougar continues to regard me with her dark lined eyes. Her paws, like boxer’s hands and much bigger than my own, flinch slightly in the grass. The claws are hidden, but I know they are there. She (for somehow I’m certain it’s a female) is close enough to feel her heat. I sense blood and death in her breath, but in her eyes there is strength and nurturing, a powerful beauty. Her growls grow softer now, almost tender, like the gentle snores of a child. She is a mother too. We are two hunters seeking nourishment and comfort in the night. We have invaded each other’s territory.

As we stare at one another, the fear flows away like blood washing clean a wound and my strength returns. I draw force from her gaze. Her dignity and resilience become mine too. My abdominal muscles tighten and my back straightens. Then, the lion raises her tail and haunches, ready to pounce. Her nose twitches. I close my eyes and hold my ground. She springs into the air. As she flies past me, the soft fur of her underbelly brushes against my skin. Then, she is over the fence and gone.

For a moment, I stand holding my breath. The garden space seems to expand around me. I reach up and caress the spot on my shoulder where her fur touched me. I inhale the cougar’s scent off my fingers and it mingles with the cedar and jasmine in the air. Dawn has not yet broken, but a hint of light enters the sky. I see that Betelgeuse has shifted toward the horizon. Slowly, I exhale, stretch and pull on my robe. I can get in an hour or two of sleep before I have to make my daughter breakfast, before I head back across the plains, back to the hospital where ICU rounds, the operating room, and the other child await. 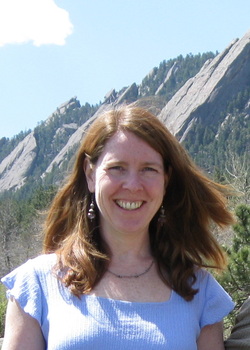 Linda Keyes is a physician and writer from Boulder, Co. This story grew out of a project with the Evening Writing Workshop at Shakespeare and Company Bookstore in Paris, where she spent the last year on sabbatical. Her flash fiction story “Where's the Last Stop” was long-listed for the Fish Flash Fiction Prize 2013. She is currently working on a memoir of her experiences as an ER doctor in Colorado and around the world.