“Hello,” the disembodied voice came from nowhere, startling Elaine who was in the midst of trying to straighten out the skirt she’d brought into the fitting room.

The zipper appeared to have been sewn into the garment at an angle and the fabric cut on the bias.  She huffed a couple times thinking she’d imagined the voice, lightheaded from the struggled of trying to fit into the skirt marked her size.

“Excuse me,” the voice repeated adding, “can you hear me?”

Elaine weighed her options.  She could step on the chair and peek over the partition or ignore it  Not sure what she’d find, she settled on the chair, the skirt cutting into her waist.  She studied the stained tan carpet, looking for feet in the opposite dressing room, but only saw piles of clothes dumped on the floor.

“What’s going on?” The voice sounded aggravated at not getting a response.

“I don’t understand you,” the voice said, anger mounting.

“Do you need help?”  This was a different voice.  There was tapping on the door--the saleswoman who’d helped Elaine find the right size that now turned out to be the wrong one.  She should’ve asked for a larger size, but Elaine was too embarrassed and refused to shout out, “could you bring this to me in a twelve?”

Elaine didn’t mind that the petite saleswoman would guess the skirt she’d picked was too small or would be judgmental.  Elaine didn’t want the voice in the other room to know.

“No.” Elaine said and wondered if she should add, “but I think the woman in the next cubicle does.”  Amazingly, it was suddenly quiet in the adjoining room.

Elaine heard the door squeak open and the clothes scooped up with a “swoosh”.  Elaine guessed it was now vacant, the saleswoman left to clear it out for the next customer.  There were some “Tsk, tsk,” sounds and then nothing.

Once Elaine realized the skirt would never fit, she slipped back into her baggy slacks and returned the skirt to the saleswoman who was standing by a rack, sorting through the items retrieved from the floor.

“Did that work for you?” she smiled.

“No, not today,” Elaine handed it to her, carefully clipped to the hanger.

“Maybe next time,” the sales lady offered and Elaine nodded before moving across the floor towards the escalator.

Elaine didn’t feel like shopping.  She was only here because she needed something different to wear to Marla’s party.  A simple black skirt with a nice white blouse in a soft fabric had been what she’d been looking for.

Elaine rode the escalator to the first floor.  She supposed she could make do with something she already had by simply accessorizing, even though it was an art she’d never been very successful at.

She wandered towards the brightly colored scarves and began thumbing through them.  So many looked like what she already had or had had at some point.  She was studying a paisley print when she heard the voice again.

“I don’t know how you can be interested in that.”  The voice was agitated and Elaine dropped the scarf and turned sharply to see who was being so critical.  The top of a blond curly head bobbed up and down by the hats and sunglasses.

She waited a second and when she didn’t hear anything else, resumed looking at the scarves.  She was examining two in earnest, one black and white print and the other a black and white check, when the voice came out loud and clear, “Well, if that’s what you want, I won’t stand in your way.”  Elaine had the sensation of someone breathing down her neck and she whipped around, but not fast enough to catch a glimpse of the disembodied voice fast becoming the bane of her existence.

The tiny tic on her left eyelid began its twitching.  Elaine couldn’t remember how long it had been since the tic had done its thing.  She pressed her hand over her eye, willing it to stop before she had to face another clerk.  It would be in such an obvious place.

“Your eye’s twitching again,” Andy told her when the invitation came from Marla.

Andy noticed every tiny change in her habits and body.  He’d been quick to point out it looked as though she’d put on a few pounds over the winter and now, to make matters worse, there was a strange voice giving out unsolicited advice.

Elaine grabbed the paisley print.  It would have to do.  She had a pair of linen slacks and a white blouse she could pair with it, wrapping the scarf around her neck.  She hurried to the checkout before there were any more suggestions about what she should do.

On her way, she spotted some earrings.  She could use a new pair to go with the makeshift outfit she was putting together.  They might draw peoples’ attention away from the fact the blouse was a bit dated and the tic in her eye, which was guaranteed to get worse by the evening at Marla’s.

“I’ve always had a thing for Marla,” Andy admitted when they accepted Marla‘s invitation.  “A small gathering of our closest friends,” was written in Marla’s perfect handwriting at the bottom of the tidy ecru square announcing date and time.

“Really?”  It was impossible for Elaine not to know this since Andy made a habit of telling Elaine that every time the subject of Marla came up.

“Do you think that’s a good choice?”

Elaine had barely touched the pair of onyx earrings when she heard the comment.

“Yes, I do.”  Elaine felt her temper starting to rise along with the increased activity of the tic as she turned to confront the voice head on.

The blond, curly haired woman fingered baubles one display over and looked directly at Elaine without seeing her.  “Well, if you think so,” she said and laughed.  Then, Elaine noticed the small contraption stuck in the woman’s ear, embarrassed she’d felt compelled to respond.

“May I help you?” the woman behind the counter asked and Elaine nodded, anxious to escape.

Behind the wheel of her car, she sighed.  It would be good to be home where the source of the voices was less ambiguous and any criticism easier to confront. 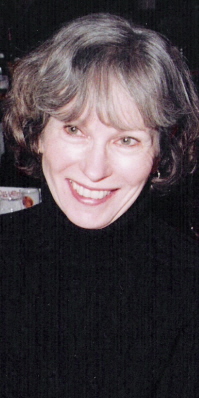