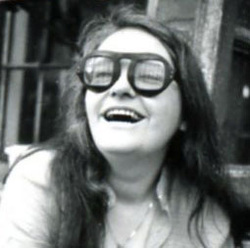 
August 20, 1983
There they all were, or many of them, lazing around the Connecticut swimming pool on this blistering summer day, the women who had been at the barricades in those early lesbian-feminist days--the zappers, the soapbox speakers, the writers, the lavender menaces--most of them, (and me) middle-aged or fast approaching.

And then, telling stories on ourselves, the militant quotes from the old days. Jan Crawford who used to shout out at rallies, "My celibacy is a political stance!" laughing now, saying it's no longer a political stance but a "circumstance." Arlie Scott, who used to say, "I want to make history, not study it," now applying for a NYU fellowship to finish her doctorate in, yes, history. And there, Artemis March, who in the early days of the movement with Rita Mae Brown and others in New York's East Village wrote the landmark paper, "Woman-Identified Woman." She had arrived at the gathering fresh from getting her MBA at Harvard. Barbara Sang, just back from climbing Mt. Fujiyama; Frances Doughty (not at an international conference) with her wry sense of humor intact.

And overseeing it all, Barbara Love, ever the movement's east coast catalyst, even this day. Someone shouting out, "Remember how we used to say that menopause was culturally induced? A plot of the patriarchy?"

Then, as the sun waned, there were more ironies about the "sunset" of our lives, as we made our way, we flashing and flossing middle-aged revolutionaries, into Barbara's house: Bettye Lane had brought her slides. The marches, the actions, the zaps, the Houston Year of the Woman Conference:
"My God, that's me! Skinny!"
"There's my sculpture!"
"Where is she?"
"God knows."
"Louisiana?"
"Oy, that's me on the far left; please, please, the next slide."
"What ever happened to her?"
"She's no longer around."
"Dead, or gone straight?"

And in the middle of it all, Sidney Abbott (an original Lavender Menace and co-author, with Barbara Love, of Sappho Is a Right-On Woman) calls from Albuquerque.

That was 1983. Already a melding was taking place – an MBA from Harvard, for goodness sake. Gone were the edgy radical visions still fresh in the minds and aging bodies gathered at the Connecticut (!) swimming pool. Gone were some of our valiant attempts at Tikkun Olam, the ethical philosophy that urges one to repair the world to better reflect a life of justice, compassion, and peace. And yet…

Today we may be burning no longer (a dictionary definition of extinct), but perhaps, just perhaps, some groundwork has been laid and with time and rest, future visionaries will appear to pick up the vestiges and run with them in their own fashion. In the meantime, there is Trivia (among others), still nurturing the fire.

This piece is part of a memoir I'm writing whose working title is Growing Up Other. It appears in a chapter called "Fifteen Minutes of Small Pond Fame: My Life as a Professional Lesbian."

At the beginning of the summer of 1983 when Barbara called me about her idea of throwing a "Reunion of Old Friends and Veterans of Movement Wars," she wondered if anyone would show up. We knew everyone was very tired, worn out, getting old. (We were in our forties!) I arrived that day from the road, having traversed a lot of the east coast trying to gather research for a book I never completed, tentatively called Lavender Highways. I was trying to put together a report on how far we had, or had not, come since the early days of the lesbian-feminist movements. I did a cartload of interviews, had pages and pages of notes, but nothing really held together. Where were we? All over the place. So I junked that grandiose idea and wrote a short book that made me crack up with laughter as I typed.

But I held on to my notes, yellowing away in a file cabinet. "No Longer Burning" comes from those notes. The quotes are exactly as I scribbled them down twenty-six years ago.

Dolores Klaich is the author of Woman Plus Woman: Attitudes Toward Lesbianism, Heavy Gilt (a spoof of a mystery whose theme is internalized heterosexism), short fiction, essays, articles, and a magical piece in Trivia #5 called "Waiting for Sappho." She lives in southern Vermont.