End of the day
end of July
7pm sun still hot enough to finger my wrists
slow swaying on the hammock
staring up through the dead barkless branches
of the old maple.

Suddenly a breeze
tickles the hair on my legs
washes me in a cool so pure
I think yes. Yes, this is it.
All the reason there is
to keep on living.

I am resigned to the
tree service delivering the bad news
about my maple
which probably saw the Civil War
and lives on still, like us,
through our wars.

I think about getting up
treating the wood on the hammock braces
to make it last longer.
Instead I lie here
you gone
me in the breeze listening,
leaves nosing their green tune to the wind
blackbird chucking from the top branch
boys playing at the end of the alley,
suspended here
between the dying maple and
the walnut whose time has come.

I was lying in the hammock in my back yard one early evening, shortly after my sister Linda died of ovarian cancer, thinking about the year that my eleven brothers and sisters and I gave my parents one of those “multiple picture” frames for their anniversary. It was huge. Unbeknownst to each other, both Lynn and I had contributed photos of ourselves in hammocks wearing tie-dyed tee shirts. It was more than a little ironic, because she was the oldest and I one of the “young ones,” and I remember her telling me that when she sent her picture in, she thought, “Nobody else will be sending a picture of themselves in a tie-dyed shirt in a hammock; that’s for sure.”  Though we were years and miles apart, and traveled what were quite different roads in life at a superficial day-to-day level, we are quite simpatico at a deeper level. And I am left pondering whether she might somehow meet me when it's my turn to cross over. 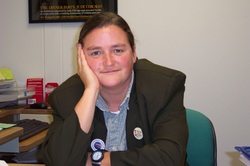 Sharon Barnes is an Associate Professor of Women’s and Gender Studies in the College of Languages, Literature and Social Sciences at of the University of Toledo, where she teaches Intro to Gender Studies, Issues in Women’s Studies, and a variety of courses in the Sexualities Studies concentration.  Her current research interests include 20th C. American women poets, with a special emphasis on women of color, lesbians, and working class women.  In addition to her work at the University, she runs the “Uppity Women’s Poetry Workshop” at the local feminist bookstore, is an organizer of Toledo’s Take Back the Night march and is active in other local anti-violence against women initiatives.