La Virgen de Guadalupe flares up huge on the concrete block
wall of the El Milagro Tortilla factory in the Big Easy,

across from Liquor Depot and King Pawn.
The graffiti artist ripped the stencil on its edges

in a veil and a simple sash, with burning votive candles
clustered on the curb.

In the moist scent of flour, corn and steam,
gladiolas bloom up her ankles. Melons tumble down her robe.

The tortilleria washes her wall with a cold water hose at dawn.
La Virgen drops blood-red roses down the sidewalk.

A spray paint sun radiates in haloes around her bent head.
It’s unknown if this sun is rising or falling.

no errors, no eros. With blunt toenails and calloused heels
she steps on or off an angel's shoulderblades.

The Latino/a population New Orleans surged after Hurricane Katrina—38,000 immigrants arrived in 2006, drawn by the promise of jobs and the need for laborers to tear down flooded structures and rebuild saved ones. They brought a new tide to the place where Native, African, French and Spanish people interwove a potent culture long ago. The painting of La Virgen on the wall—and the tortilleria itself—would not have come without this new population.

An hour wandering in the city offers up sharp visuals and conversations, mouth-watering contradictions. The poem took many prior directions. It started as a prayer to this surprise divine mother figure, to lift the city out of its cycles of daily murders, its poverty and abandonment. Later, “asking” her for something felt too weighty or pious, and burdened with my thoughts. The bare fact of the paint on the wall, her bright form, the pause for beauty—enough just as it is. I’m grateful. 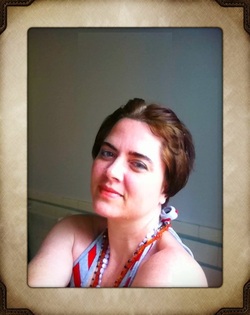 Abe Louise Young is an award-winning poet and educator whose work explores creative contact and liberation. She lives in Austin, Texas, and was educated at Smith College, Northwestern University, and the University of Texas, where she was a James A. Michener Fellow in Writing. Her poetry/essays have recently appeared in The Nation, The Christian Science Monitor, and the Massachusetts Review. Her books include Queer Youth Advice for Educators: How to Respect and Protect Your LGBT Students (2011), a chapbook of poetry, Ammonite (2010), and Hip Deep: Opinion, Essays, and Vision from American Teenagers (2005).