A Note on Xenogenesis as a Love story 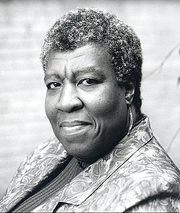 Their nature is
always to be midwife to
themselves as other.
Donna Haraway, Primate Vision

I sit in the NYU library and re-read Octavia Butler’s Dawn. She’s a writer whose books never stay on my shelves. They’re hard to get and they don’t stick around.

Dawn (1987) is the first book in the Xenogenesis trilogy, then Adulthood Rites (1988) and Imago (1989). These are the Octavia Butler books that I love the most since they are to me love stories.

The Oankalii, an alien species, have rescued some remnant humans from their suicidal nuclear conflagration on earth. The rescued humans are kept on the Oankali ship while the Oankali restore land in the Amazon valley. They plan to recolonize earth as mixed-species, human/Oankali and Oankali/humans.

The Oankali are gene traders – everything they touch, they change. The humans’ survival indicates that a mutation has already taken place. The humans are considered too dangerous to themselves and to their environment to be allowed to reproduce without the mediation of an Oankali “ooloi” – a neuter gender that gives intense intimate pleasure during the sex act.

Interestingly, I regard this as the humans’ reading of what is happening. The humans see themselves as being force-bred captives. And they revolt, violently.

For the Oankali, the breeding with humans is not a matter of force or choice. They are compelled by who they are – DNA traders. They must breed with the species to whose planets they are migrating next. They are motivated by survival, expressed as deep curiosity, and a deep desire to know intimately, and evolve. In fact, they are hopelessly attracted to this ignorant, aggressive, deluded, dangerous human species.

The Oankali inhabit a dense zone where every thing is sensed fully, is ALIVE, interconnected and curious. Every contact penetrates deep down to the cells and their patterns, and to the outer planets and their solar systems.

Rather than consume, rule over and destroy everything that is not “us,” here are the ultimate “others” wanting inter-galactic, inter-species exchange, yearning to merge, to bring pleasure, to know deeply.

And what is knowing deeply if not love?