Dr. Angela Bowen - National Women’s Hall of Fame Nomination, 2017
​
​From the inner city streets of Boston, to star dancer, to founder of Connecticut’s beloved Bowen-Peters School of Dance, to black feminist activist, to distinguished writer and professor, Angela Bowen has had many influential identities, and in each one, she has encouraged all around her to reach their fullest potentials and embrace their true selves.

Angela Bowen has confronted racism, sexism, and homophobia for over six decades, transforming her own life, and the lives of those around her.

Angela Dorithia Bowen was born February 6th, 1936 in Boston. She was the 6th of 7 children; her father, Charles Bowen, who made his way north fleeing the racist conditions of South Carolina, delivered all of his children at home. Bowen’s mother, Sarah Allen Bowen, came to Boston by ship from St. Croix when she was just a teenager. She was able to manage the cost of passage because her father gave her a goat, which she raised and then sold for a ticket. When Angela was two years old, her father died and Mrs. Bowen went to work in other people’s homes while trying to keep her family out of housing projects, which she was able to do.

Angela was a bright student who excelled in sports. She was among the few black girls admitted into Boston’s prestigious Girls Latin School. After one year she left to attend Roxbury Memorial High School, which was closer to The Elma Lewis School of Fine Arts. Fourteen was late to begin the arduous demands of classical ballet, but in 1956, two years after she began, Angela danced the pivotal role of the Black Swan at Boston’s Hancock Hall; nearly 60 years before Misty Copeland, the first black ballerina performed the role before a national audience. Lewis (1921-2004) provided young black boys and girls with a world of music, excellent
training and exposure to classical and African dance traditions. Lewis received a MacArthur Fellows Grant in 1981. Bowen was her right hand assistant until she was 21.

Upon high school graduation, Bowen received a scholarship to Emerson College, quite the accomplishment given the times. Much to her mother’s horror, Bowen attended college for only two years; she wanted to dance while her body was young. Mrs. Bowen had high hopes for Angela. “Our people don’t need dancers,” she said. “We need doctors and lawyers and teachers.” Sarah Allen died from a heart attack while on her job as a domestic worker; that is when Bowen left Lewis’s school with her dance partner for professional opportunities. They made their way to the “Great White Way” during the era of No Blacks on Broadway. “We knew they wouldn’t take us, but we auditioned anyway - over and over again, just to be in their faces,” says Bowen. The only opportunities for them were in Europe. They tried out for the historic “Jazz Train” and toured in Italy and Germany.

The wooden floors at the famed La Scala Opera house were rough and splintered, worn from donkey carts rolled onto the stage during operas. The producers refused to provide sandal soles to protect the dancers' feet. Angela, one of the youngest members of the company threatened the producers with a boycott unless they received sandal soles. Some members of the troupe were against her position, nevertheless, Bowen recalls, “what are they going to do, fire us all?” Bowen says, “It took only one night before they had the sandal soles. They were too cheap to get them. They were willing to let us suffer.” Bowen loved dancing and being on stage, however, the conditions and pay were not good, and she missed the lively political conversations she was used to.

Bowen received advice from an older fellow dancer. He told her that she “really didn’t belong there,” and she agreed. While she loved the dancing and being on stage, she had set her sites on creating her own dance school, returned to Boston. She married Ken Peters, a drummer. Together they opened The Bowen Peters School of Dance in 1963, in New Haven, Connecticut. Bowen Peters provided the city and the state with cultural enrichment for children and parents through their classes, performances, and presentations, during the tumultuous and dramatic years of the Civil Rights Movement and Black Empowerment.

Bowen brought visiting choreographers to set their dances on her students, and African students from Yale University helped teach the Bowen Peters dancers and drummers, initiated Black History and Culture programs in the public schools, and instituted Teacher Training Programs throughout the state. She served as arts advocate and liaison to the community, business, corporate, state and national leaders.

In 2008, the Mayor of New Haven, John Destefano. Jr., issued a Proclamation “for a Lifetime of Commitment,” declaring April 2nd to be Bowen Peters School of Dance Day. The Bowen Peters school of Dance saved and changed forever the lives of inner city children and their parents for nearly 20 years.

Bowen’s legacy continues through the untold numbers she has influenced. Among her students are state and federal Judges, Teachers, Religious Leaders, Artists, and Dancers, an international Water Choreographer, and the director of the Alvin Ailey School for young people. Lucretia Mack, Bowen’s first prima ballerina, and who quit dancing for marriage, recently wrote to Bowen to tell her that she passed along everything she had learned from her to her son Brooklyn, who is a classical dancer who tours all over the world. Last year he last danced with Misty Copeland.

Bowen received many awards including:

The Women in Leadership award, YWCA

Business Woman of the Year, The National Association of Negro Business and Professional Women’s Clubs

In the early 1980s, Bowen made the most difficult decision in her life when she decided to close the school to join the feminist movement and the women who were inspiring her to become a writer, activist, and social justice change agent. She moved back to Boston to be near her children’s grandmother and became a grant writer and event coordinator for Casa Myrna Vazquez, a battered women’s shelter.

​When there were few out black feminists, let alone lesbians, Bowen spoke about revolutionary feminism, black lesbian and gay life, lesbian parenting, and honoring diversity nationally and internationally. She spoke at rallies and marches at the state house and on national radio and television programs. Her voice was clear and strong against a Massachusetts state ruling, which prohibited Lesbians and Gays from adopting foster children. Bowen was a mother and a foster mother.

In her speeches she focused on coalition building, gay and lesbian pride, the importance of “owning your own life, and the intersection of racism, sexism and classism.” Bowen spoke at over 60 colleges, and universities, she was frequent keynote speaker at conferences, clubs and organizations, including The Girl Scouts of America, and appeared on local and national radio and television shows including Black Entertainment Television and on WBZ, TV Boston on the first National Coming Out Day.

Bowen served as Co-chair of the National Coalition of Black Lesbians and Gays with its founder A. Billy Jones, and was the Editor of Black/Out, the organizations national magazine. She spoke at the first International conference for Women in Nairobi, Kenya, in the Netherlands. In Italy she was a featured speaker at a Conference on the influential Black Lesbian Feminist Poet Audre Lorde.

Bowen was an excellent organizer. In 1990 she was the co-coordinator of the "I Am Your Sister: Forging Global Connections Across Difference," transnational conference, attended by more than 1200 women, men and activist youth from 23 countries. The conference is documented in the award winning film: "The Edge of Each Other's Battles: The Vision of Audre Lorde," (Women Make Movies). Bowen’s awards for her activism and publications include:

For “Social Change in the Boston Community, Boston Women’s Fund

Bowen was a wonderful writer. And in her return to Boston she attended A Feminist Writers Retreat and took writing workshops. She wrote for feminist newspapers and journals and was the first to write reviews of now classic feminist books and journals written and produced by white women and women of color.

In her fifties Bowen returned to college to complete her Bachelor's degree at U Mass Boston, having received the Chancellor’s Scholarship for Excellence for “Outstanding service to the community. She had supportive mentors who appreciated her talents and skills. They also encouraged her to continue her education, something she had no intention of pursuing. “I needed to get a job to support my daughter through college.” But she did apply and Bowen was the first PhD Graduate in Women’s Studies Program at Clark University, and one of the first in the country.

Bowen’s dissertation, "Who Said it was Simple: Audre Lorde's Complex Connections between Three Liberation Movements," (1997) is the first dissertation about Audre Lorde. An excerpt is included in "The Wind is Spirit: A bio/anthology of Audre Lorde” edited by Dr. Gloria Joseph, (2016).

Bowen began working at Cal State Long Beach in the mid 1990s as the first black woman in the 30-year history of the Women’s Studies Department. She taught for 13 years. Bowen’s mission was to discover and encourage a diverse group of students to go on to higher education. She wanted them to be tops in their field and to help diversify the academy. She always told her students, “Find your allies.” Because of her mentorship, over two-dozen students from diverse backgrounds are now working in the academy or are tops in their particular fields.

Bowen passed along her organizing skills to her students. Under her guidance in her “Women and Power” course, the students organized a conference called “The Beautiful Body of Women,” which led them to create The Women’s Studies Students Association.

Her mission in the classroom was to introduce and create courses about the experiences of women of color. The CSULB Women and Science Project, "Finding and Holding Women of Color in Science,” included a booklet of Women of Color Scientists that she designed. Bowen was the innovator of many course “firsts” including American Ethnic Writers, Black Women in America, the Toni Morrison Seminar, U.S. Women of Color, and Women Writers of the Harlem Renaissance.

While at university, she was President’s of the Commission on the Status of Women, which focused on gaining equal pay at the university for women. In 2000 she received an award for “Outstanding Leadership and Dedication,” was Advisor for Partners for Success, contributed to the Women’s Resource Center Services and Programs, and was Advisor to the Lesbian, Gay, Bisexual, and Transgender Resource Center.

Angela was selected to be the Keynote speaker at the first LGBTQ graduation ceremony at Cal State Long Beach. Dr. Bowen dedicated her speech to her Mother.

In 2012 Bowen’s book “Out of the Blue: Aleta’s Stories” a semi- autobiographical fictional collection of short stories was published and is now being taught in university classrooms. Bowen retired due to illness in 2010. Her life is the subject of a feature documentary being distributed by Women Make Movies: “The Passionate Pursuits of Angela Bowen,” 2016. 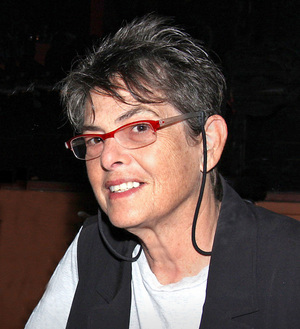 Jennifer Abod is a feminist musician, journalist, activist, and documentary filmmaker. She holds a Ph.D. from Union Institute and University. Jennifer was co-founder and singer in the New Haven Women's Liberation Rock Band and was the first woman in Connecticut to host a talk radio program. Her first documentary in 2002 was titled "The Edge of Each Other's Battles: The Vision of Audre Lorde." For more information, visit her website.