Donna Kaz
Purple clouds drift
across a chalk white sky.
Telephone poles bleed new rust
and sprout plastic bags.
Sedimentary rock sports
a fresh face of lightening bolts
and the numbers three and four.
A sea of oat grass
bent over with tulip-root
surrounds the Days Inn.
Someone has painted the Dutch Boy factory
bright green and hung up
a ripped American flag.

My train is stalled just before
the long black tunnel into Grand Central.
I sit in the dining car
tearing open sugar packets,
dumping them out on the table.
Through the soot tinted window
I see a rat scurry over
a twisted fragment of hemp then stop
fall over and die.
The garbled voice of a stranger on the intercom
repeats words made up of only vowels.
I strain to comprehend his message:
we will be moving again.

For a time I commuted from New York City to New Jersey on a regular basis and would see the same landscape day after day through the train window. One day, I looked out on a scene that was littered and abused and summoned up a glimmer of hope. 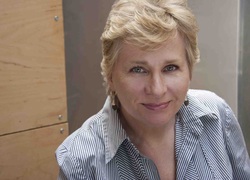