She Who. . . from In Search of Pure Lust


It's a week since we parted. I take myself to see "Wings of Desire." There's a scene in the bar when they finally find each other: the man-angel and the woman trapeze artist. He offers her his glass of wine. And the camera frames her face, her red lips that begin to speak at last. I notice the perfection of those lips, the smoothness of the skin just above them, beneath her nose. I notice because at the dentist on Monday the hygienist handed me the mirror to check out a place my toothbrush was missing and instead of that I saw the hair on my upper lip. It looked shaggy and dark. I told myself it was those dentist lights. But all week I've obsessed over it.

And I notice those lips because of Clara. How perfect hers were. How she kept them rouged and perky. How mine must have looked to her, I think now, with all that hair. Yes it might have been something that simple that superficial. Maybe she really longed to feel attracted to a woman, to me, and was stopped by something as trite as dark hairs on the upper lip.


And you? What was it you felt on those coastal evenings each night a different town, sitting down to white wine and calmari and cigarettes? Be honest, now, you. Each night dressing up for her—you'd brought your best clothes—a kind of a thrill. Each night hoping to see in her eyes that she is happy to see you, that you are beautiful to her. Sexy even? Especially on the last nights when you have a nice tan from your hours on the beach. Mornings were difficult, yes, every morning waking up to dull ache. But the evenings. . .oh if it was pain then it was pain mingled with something like ecstasy, to be always on the edge of the unbearable, always on the edge of possibility.

The tantalizing possibility that one of those women might actually look your way.

She Who has never been with a woman before, who is not in your world. She Who says she wants in. She Who is perfect in her beauty like the women who came to your father's library. She Who is shy and trembling and needs and wants to be coaxed and brings out your love of coaxing. She Who brings out the prince charming the feminist savior.

She Who decides very suddenly she is not a lesbian this has all been a fantasy. She Who has lured you thousands of miles away to a hotel in Yugoslavia where you've explained to the embarrassed hotel clerk that the two of you want only one bed. She Who refuses to be touched. She Who—the clerk has given you twin beds which you've moved together—moves the beds apart. She Who inspires every one of your old fears about yourself. You don't have the right clothes or makeup maybe there are hairs on your upper lip of which you're not aware. She Who just by the way she dips into her leather suitcase, plunges her hand into the silken mass, the skirts the slips the scarves tells you she is not your kind and you will forever be subordinated to hers, subject to her whims, at her mercy. . .


It's occured to me that what we can least forgive others for is bringing out our worst selves: exposing the gap between who at any given moment we most wish to be and who we most undeniably are. Grace's Southern hospitality her empathy her graciousness—how they shrivelled up in our last months together, turned to rigid, hateful, mean-spirited. Helen's expansive vision her capacious leonine love replaced by a clinging desperate finally vengeful self. And Clara—who had put her hand on my hand in that cave in Ireland, who had thanked the goddess for allowing her to know this love, Clara of the few words, simple but deep—how she must have hated me for having brought out what she hated most in herself: the cramped, critical, bourgeois snob. Yet apparently, I could forgive Clara for reducing me to one who looked doubtfully at her white reebocks and her cheap Timex watch. For seeing me through the harsh glare of dental lights.

It's the ones who loved me I couldn't forgive. The women whom I failed in love, for whom my love failed, which is to say faltered, sputtered, gave out—and was there ever a woman who let me close for whom my love did not falter? The women who forced me to confront the gap between what I professed with my whole being to want, what my whole life was dedicated to—loving women—and who I was: someone who couldn't. Not at least with any singularity of focus. Not with any consistency. Not in such a way as to inspire faith, or trust.

She Who brought it to a head (in me) and whom I could never forgive for forcing my hand so completely. She the other redhead. The one from the Midwest. The expert in cutting remarks.

We sent each long letters with clippings. Press releases for idiotic books, phrases from political correct feminist papers "the words 'art, vision, dance' are in no way meant to imply that these are universally possible.'" Our acid perceptions sparing no one. "You forgot to underline potluck dinner. So hilarious."

Throwback to my childhood. Del my familiar.

Her self-deprecation, with its tendency to spill out on me. "I think every woman I love is doing just fine. But I think I am wasting my life. Why is this? Don't answer. You're just the one to say 'yes—you are.'"

She ma semblable ma soeur. She who wore the hooded cape in my dream and looked slightly nerdish. Lounging around like me in sweatshirt and pants. "I hope you won't be permanently disabled." Sacrificing compassion to humour. More like me than any woman I've been with.

She whom I sat beside in tortured silence with the frozen lake below waiting for a sign to appear. Waiting in my heart, for some pulse of feeling something that could be translated by my tongue. Touch to my tongue. ("Do you like to have sex with me?" in thin worried voice.) The words of the lesbian poets who loved so juicily so fervently returning to taunt me reproach me for my stinginess my dried-up heart. Dumped by the wings of desire and left for dead.

She has become the one who makes of me someone who when she reaches inside finds nothing there. Who can't feel. Who when she reads a passage from Duras' The Malady of Death has to admit she identifies. It applies to me. And in an unfunny funny moment she writes the words on my forehead "dead man." I am what I have always hated I am become one of those men I resented for being so undeserving of what they had been given—her love. For not being able to return it in kind. Undeserving recipient of the greatest gift known to mankind.

I reach in it's not there I reach in over and over, keep checking, I think sometimes I feel something flickering in there trying to kindle, to rub itself back to life. It can't be out for good! It's just dormant, needs a little help to spark again. . .

But only months ago, November, those moments of frisky, girlish joy. Hilarity. My heart swelling with every phone call. Unreasonably happy despite the world's woes. Watching the returns at her place, George Bush and Dan Quayle, a nightmare descending. The very next day we walk up the gorge together—rotting leaves and branches, sharp white line of froth—then stand in the huge vaulted space, gaze up at the water drilling down from that high mouth. And skip back down the trail, all gloom dispelled.

It must be the way she's changed, yes, the way she cowers now seems afraid of me the way I feel her pulling at me, just don't pull at me okay? I can't feel when you do that, just go on doing your own thing, just leave me alone.

This is a chapter from a memoir-in-progress, In Search of Pure Lust, that, among other things, attempts to answer the question: "whatever happened to those wild on-the-edge lesbian seekers who were hellbent on reinventing the world?" Having been one of those seekers, I know how to answer the question only in the most personal terms. What happened to me, and what in so many cases ended "us," was the very thing that originally propelled us, that made us huge with vision and possibility. Lesbian desire had been the greatest force for creation, for expansion, for love, I had ever known. Yet, as I came to realize, in its baser forms—and it inevitably devolved into these—it became a force for constriction, and often for destruction. Time and again, I saw friendships, even communities, brought down by it.

This much I learned in the course of my love adventures. Desire was a wild card, wayward and unpredictable. It reared its head when I was feeling wary, estranged—even, abused. It flagged when I was fondest and most trusting. And more often than not, I couldn't help noticing, it fed on, and fed into, childhood wounds. While at first it might have catapulted me far far from my origins, my family history, over time it had a way of thrusting me right back into them—if not of rubbing my face in them. In short, as many of us came to discover in the course of those years, Lust was often not very Pure at all.

For myself, after one brutal ending too many, I began to sit zazen and, over a period of many years, learned how to sit with desire, not to be tossed around by it. The memoir chronicles this shift and the changes it brought to my life over time, how I learned—though not without alarming relapses—to practice sustainable friendship, and love. 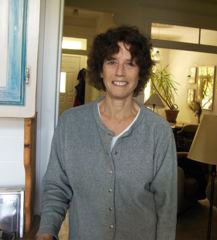