A whole generation who couldn't
sing. Misplaced peacock feathers
would explode from their mouths
without a single note. Full
fluffled silence.

The girls pranced and preened,
brought knives to their thighs, eyes,
cut away their scale-gleam. And as their fluid
fins sprouted sharp stark legs,
brass knob kneecaps, their fish songs
burrowed down deep,
herringbone ribcages.

In the summer of 2012 I became obsessed with mermaids.  Foremost on my mind was the story of Ariel in Disney's The Little Mermaid.  Ariel must sacrifice her voice--the price demanded by the older woman and witch, Ursula--in order that she may grow legs to be with her handsome prince--to be made real. The filmmakers cleverly chose Ursula to serve as the catalyst for the horrific sacrifice of Ariel's voice.  The implication is that we women do it to ourselves. This characterization points to how women are on one hand demonized and on the other socialized to pass on our trauma to our daughters.  I remember as an adolescent and young woman struggling with very low self-worth. I believed that if I could just find the right romance, the right boy to recognize me, I would finally be real.  I actually wrote earnest poems with that exact language--they make me shudder now.

Mermaids also speak to me of the Great Mother, the Ocean, the womb of life.  By sacrificing our fins, the ease with which we can move fluidly through emotional and intuitive waters, in order to walk a dry arid land of tight and seamless intellectualism, we lose our native tongue. This is not an either-or scenario--I'm not advocating choosing emotion over intellect or vice-versa or saying that women are essentially emotional rather than intellectual--but I am saying that the abandonment of emotion/intuition as a valid way of knowing and being in the world (for ALL humans) leaves us wobbly-legged and diminished.

And finally, there's all the wildness of ocean, of our natural scales, our unique beingness that pop culture/celebrity culture/capitalist consumer culture would have us slice and cut and squeeze down to something homogeneous and manageable.  Inject poison into our faces to paralyze nerves thereby reducing wrinkles and rendering us expressionless. Inject solution into our lips to puff them out as if we just got smacked.

"Fish Songs" is a lament and also a spike driven through the veneer.  A call to remember. 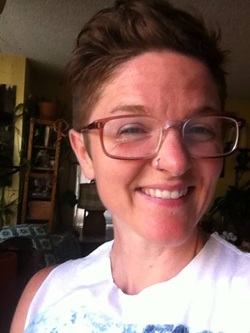 Originally from the wide open prairies of Kansas, Shae Savoy is an MFA candidate at Goddard College and also teaches at Bent Writing Institute in Seattle. Shay's poems have been published or are forthcoming in several print and online publications, including Sinister Wisdom; J Journal: New Writing on Justice; Wilde Magazine; Eternal Haunted Summer; and the forthcoming anthology Once Upon a Time from Requiem Press. Additionally, her poem “Brotherring” was selected as a finalist for the 2012 Yemassee Journal Pocataligo Poetry Prize.