She was a pretty child just shy of fourteen
broken home, broken bones, broken dreams
she could make the boys look yes she could be seen
in her stepdad's eyes she saw the same glean

Tried to make it her way, tried to save a few bucks
set off from home, on her own, out of luck
sleeping in bus stations, hitching rides in trucks
suffering sex for a bed, trading food for fucks

She is 13-years-old, her life's a fight
She is entertainment for men tonight

Living in the suburbs, one child six one child two
not a glamorous life but she's making do
married to a man who leaves her black and blue
before leaving her, for good, for someone new

Tried to make it her way, tried to persevere
but two mouths at home plus her own made the choice clear
took the job getting paid to let men leer
the more they look the more she wants to disappear

She is a woman, a mother, a housewife
She is entertainment for men tonight

Tried to make it her way, tried to find her place
a summer's vocation turned a murder case
when they stabbed her neck, stabbed her hands, stabbed her face
the camera captured her death's disgrace 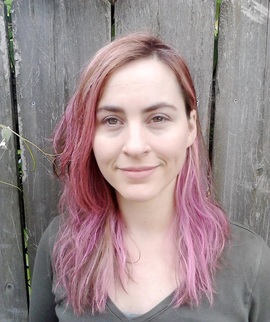 Samantha Berg is a radical feminist journalist and activist. Originally a reproductive rights advocate, in 2003 she began working specifically against prostitution and subsequently created the community forums at Genderberg.com and the blog Johnstompers.com.

Her articles have been published in progressive media for over a decade and she speaks about the need to reduce men’s demand for prostitution through articles, public presentations, media interviews, and anywhere she can. In recent years, she has directed several radical feminist conferences and anti-prostitution events in the United States and Canada.