"I create a performance space to do women's studies in the streets." 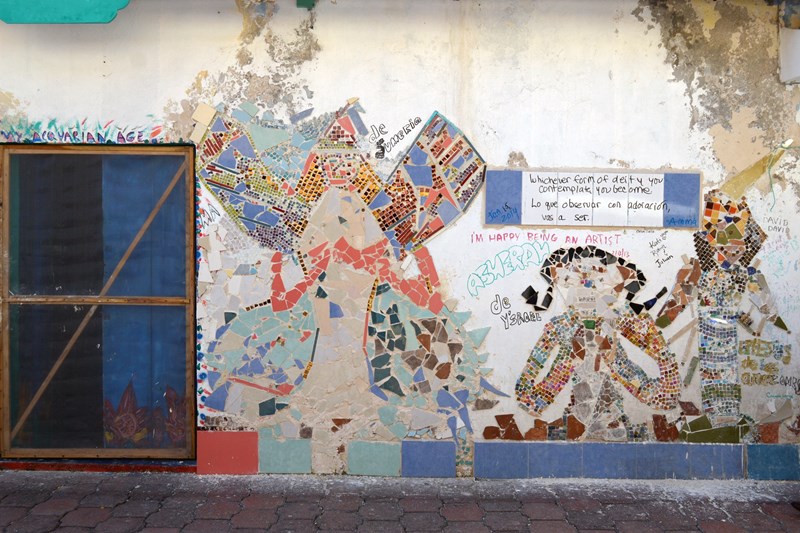 "We create discussion about the goddess energy on the island, and about how in the Aquarian Age, this feminine energy needs to rise again, in whatever the form."

"...the purpose of Femenina Sube is to create a retreat space for women, a meeting point, a safe haven for travelers." 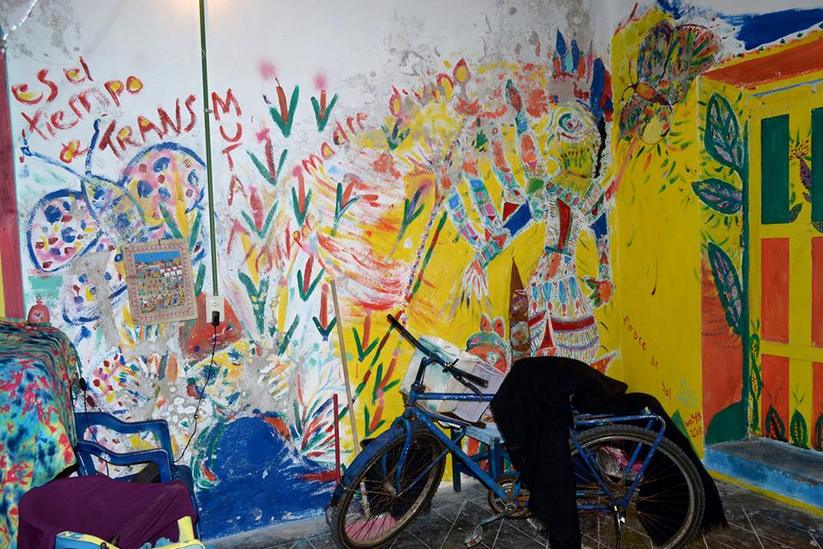 "The project operates collectively. Anyone who comes along can add what they wish to augment the theme." 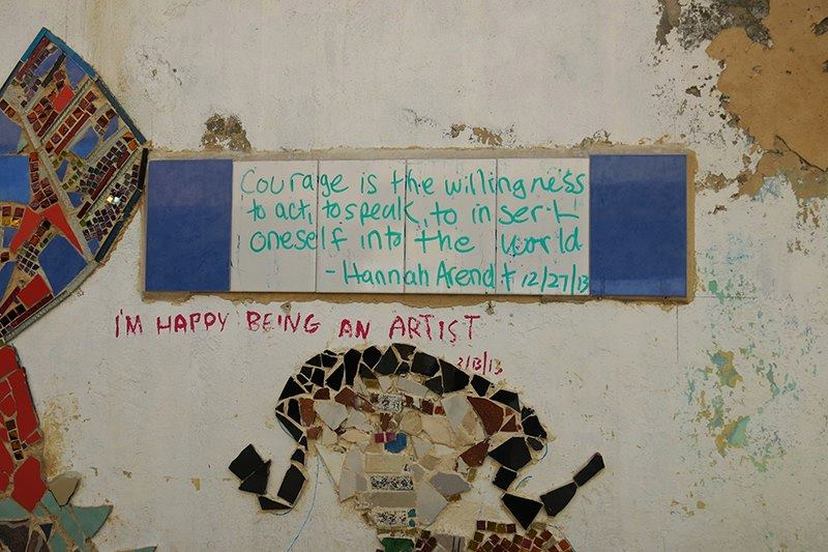 "I talk every day with passers-by and invite them into the project." 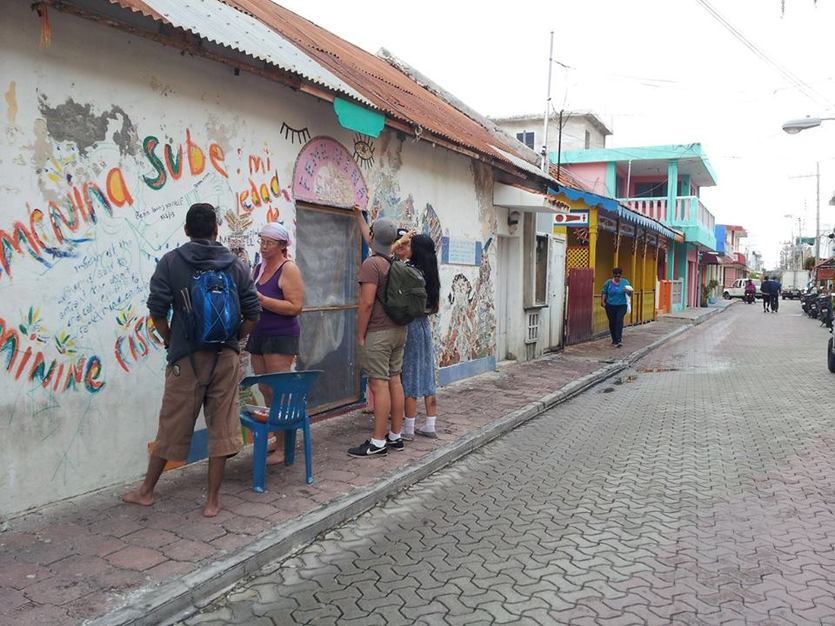 "You are all welcome." 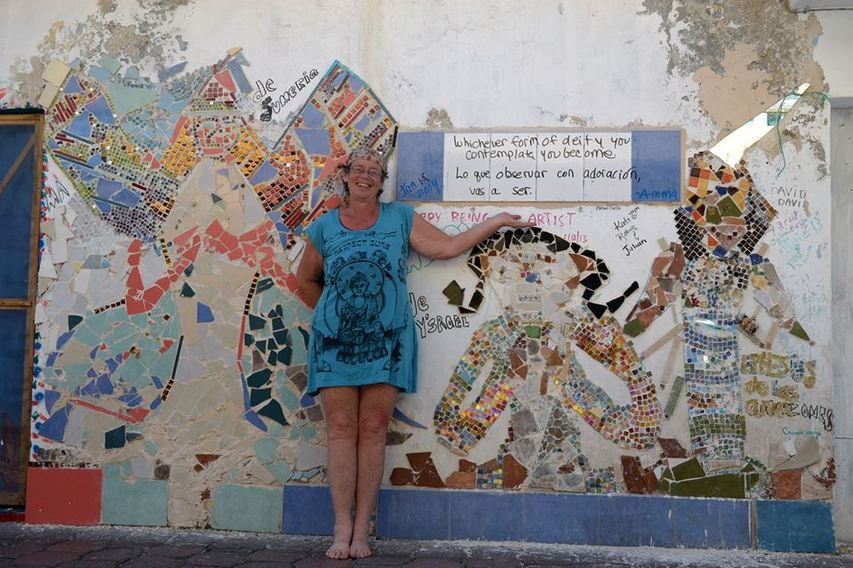 These photos were taken in the field in Isla Mujeres, where I was working on Femenina Sube/Isla Mujeres/Community Art Project. I consider this research through participatory action. I was walking on the beach on this island after attending events surrounding Chichen Itza on the Yucatan Peninsula in the end of 2012. I discovered a giant penis made on the sand, kicked it to shreds, and decided to do something in the culture wars. I was fed up with how much patriarchy had taken over the island, with its sports bars, paved streets, girlie T-shirts and, towels. I rented a storefront to help usher in the return of female energy as predicted by Mayan prophecy. The shop is called Femenina Sube, or feminine rising: my Aquarian age.

The project operates collectively. Anyone who comes along can add what they wish to augment the theme. I learned from other artists attracted to and participating in the project that originally, mosaics were made from “found” pieces of rock, stone, etc. that were located in the environment and pieced together. I went through a natural evolutionary process to get back to this original form of mosaic, in which numerous goddess images were made in the period of the Great Mother. I began with purchasing tiles, and evolved organically to using scavenged tiles I found discarded in pieces around the island, to using other found objects including bottle caps, lollipops, jewelry, rope, cable, plastics, utensils, broken motorcycle lights, and broken glass. I also learned of new fertility goddesses, whose images were drawn on the wall by local participants. One of these included Oya, the Yoruban goddess of wind, contributed by a woman from Serbia living on the island. Originally I had started creating a channel for the return of the Great Mother by using research I had done into visual images from Hittite, Babylonian, Hebrew, and Mesopotamian cultures. I was making a statement on this public wall on a busy downtown tourist street that the Great Mother in her various forms watches over, and will outlast, us all. I had picked goddesses from ancient cultures who had the same function as the goddess Ixchel, in Mayan culture. Ixchel’s temple had been here.

Throughout the operation, new connections were generated, such as with a local feminist who came to work on the island after settling with the Denver fire department in a matter of gender discrimination; with a local resident who made boxes to sell at a local artisans’ fair, and came to mosaic the goddess Ixchel and a serpentine woman priestess-diviner; with a well-known Argentinian woman writer of fantasy who began to research the goddesses portrayed in the mosaic; and with online students from different classes and studies who contributed to the debate on Facebook about the legitimacy of the Awen life force symbol being on the wall. The latter had been questioned because one student said there were no women druids so the inclusion of this symbol was contrary to the intent of the wall, but the debate was settled later by a post she provided explaining the Awen symbol of life had been used by the Celtic mother goddess Cerridwen, in her cauldron of life.

The knowledge gained also included further understanding of the development of international tourism on the island, which will be incorporated into the second edition of my University of Texas book, Islands of Women and Amazons: Representations and Realities (2000). This on-going research was greatly deepened by the tourists from all over the world who participated.

I learned how to meet artists by doing public art, and I learned how much artists are respected in Mexican culture. I learned about the difference between folk art by artisans, which is largely what is sold on the island, and art from a post-modern reclamationist perspective. I learned how to pronounce Cybelle, from women from Turkey, and that people of all ages, walks of life, sexual orientation, nationalities, and abilities can participate in the same project. I learned that a community will support a public art project, by contributing money, supplies, and scavenged objects as well as ideas.

As an artist, I learned how to work in a new medium, the importance of thematic unity and color, the importance of viewing a large work of art from a distance, and how to bring elements of my style in other mediums into this new one. I learned the importance of integrating individual styles people contributed over the entirety of the visual space, providing coherence to the viewers.

The participatory action research far exceeded my research expectations. I found out more about tourism generated and the impact on the local community. I learned about the development of traffic with the inundation of cars and other vehicles, the history of the fight to keep the island carless and to preserve the original sandy streets, how hurricane damage had increased as the island became covered with pavement, and information about goddesses I did not know about as new suggestions adding to the mythical images of ancient female deities I had selected were proposed and I had to research them and invite participants to debate the merits of new additions. I learned how to handle drunks on the street who approached us, the different reactions to the idea of a woman-only space, and how much interest can be spread in a project internationally through the use of Facebook.

I am continually amazed while working on this ongoing project about how much discussion can be generated on the streets about myths of the past, and how easy it is to create new visual forms of ancient myth of interest to the general public more now than ever before.

You are all welcome. Contact us at femininasube/Isla Mujeres/community art project, on Facebook, or at femeninasube@gmail.com. We retain an apartment for those who want to work on it, and women have come from China and the US to do so. The project operates year round. 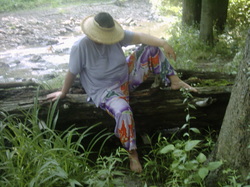 Batya is an American writer and artist who operates a collective feminist art project on Isla Mujeres, Mexico. Her latest published book is Down the Birth Canal. She teaches at American Public University and Empire State College Center for Distance Learning of the State University of New York. Her work is currently available at Chick's Emporium and New Mercantile Exchange in Floyd, VA. She founded and edits the journal Femspec. You can see more of her work at reclamationproject.info.