Committing more crime than they could handle, the women drove toward Mexico, heading south through West Texas. They noticed the roads, carved and paved by human hands. They observed the fences, signs of ownership. They knew, intellectually, that all this space had to have a name, be a part of some town. But they went hours without seeing a sign telling them where they were, just symbols for gas stations and picnic areas. They forgot their names as they slipped through these sun-bleached territories. They lost their identities as they were taken in by the empty sky. Their sins were sloughed off by succulents, scorched away by the sun. By the time they reached the border, they were scrubbed clean of their past lives, their unspeakable transgressions. They realized they were now strangers, but forged on together anyway. Neither wanted to start over all alone.

“Fleeing Oklahoma” was drafted on my first trip to Marfa and Big Bend, which I took with a close friend. She and I are both introverts, and spent much of the eight-hour drive in companionable silence. Up until that point, I’d never traveled farther west than Austin, and was unprepared for the beauty and expanse of West Texas. I began to wonder how easy it would be to just disappear out there on I-10. At some point, my thoughts turned to Thelma & Louise, and how their story might have ended if Louise had been willing to travel through Texas to get to Mexico. I did not set out to do a deliberate retelling of their narrative, but was inspired by what might have been. 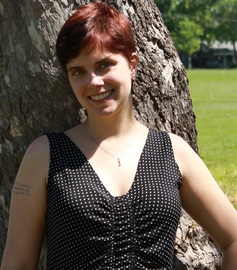 Allyson Whipple is a poet based out of Austin, Texas. Her writing has previously appeared in the 2012 Texas Poetry Calendar, Young American Poets, The Cleveland Review, Every Day Poets, and Southern Women’s Review. You can read more about her work at http://allysonmwhipple.wordpress.com/.