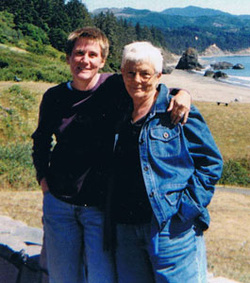 Dear Lise,
Eons ago, you suggested I develop some thoughts I'd just expressed about how those of us who were fortunate enough to live passionate committed lives from the early women's movement on sometimes respond to younger lesbians. I said I couldn't write a piece for Trivia, but that I'd try to jot down some of those thoughts in a letter to you. I just came across a few notes I made back then, so I'll do my best to convey what it was that I promised to pass along. Since my "insight" isn't all brand new, it may lack the passion with which I expressed it then, and that is probably what caught your attention. Still, here goes:

I had come across a new glossy free magazine (the kind that show up in coffee houses) for lesbians in San Diego, called FlawLes, with a photograph on the cover of young, slim white women staring at each other with what seemed to be passionate intensity. I picked it up with a familiar kind of aversion already rising, and a real resistance to looking at it. I thought I "should" read it, just to know what is out there by and for San Diego lesbians—who are they? what are they thinking? how are they viewing the world?—so I stashed it away to take to the desert for, let's face it, bathroom reading. I was surprised by just how much resistance I had to opening it.

Inside were more photos of young, slim white women, in tuxedos, in bustiers. There were stories of young, slim white women in real estate, chefs in restaurants, karate teachers, singers, info on the hottest local boutiques to freshen up your wardrobe. My anger as it began to rise was an anger at a whole generation of younger lesbians. How could they wipe us out in this way, how could they turn their backs on everything that lesbian feminists of the '60s, '70s, '80s accomplished and revealed, render us--and more important, all we built-- invisible in both the past and present?

I've been absorbing Buddhist practice, and as you know, the desert is for me a place of greater clarity, but still I was surprised to feel suddenly a kind of seismic shift in my reaction. I am still shifted. Here is the understanding that may take a long time to explain but took only the space of a handful of minutes to shift me:

It can be painful for us, as lesbian feminists active in the '60s and '70s and beyond, when younger lesbians speak condescendingly of who we were—seeing us as joyless, blindly man-hating, a-sexual, afraid to be feminine, making ourselves ugly, whatever—meanwhile ignoring entirely what we did, wrote, said, or if they are academics or progressives, deciding that we must have ignored race and class. Feeling our lives—which we know were extraordinary—made invisible, we may assume, reflexively, that such attitudes towards the generation of women who preceded the current generation mean they are acting out of ageism (whatever momma did, I'm going to do differently), or out of a real disrespect for what we did, who we were, how we saw the world.

Somehow on the desert, I saw clearly: They aren't dismissing us. They don't know us. How could they? This isn't ageism, as we usually define it. It's not separation from momma. They don't know anything about momma.

They have no history at all, or they have the incredibly pared down, distorted history that lingers in mainstream and progressive media—the man-hating, sexless women who burned bras and made a fuss until the powers that be changed some attitudes and opened up some mainstream jobs, but who never recognized that the world has changed and so still hold these sour grudges towards men and society.

(I had a similar sketchy and unpleasant notion of the women of the Temperance Movement, until Barbara1 explained that these were women-identified women, who saw the horrors for women of husbands and fathers who took their paychecks to the bar and then came home, without money to feed the family, and raped their wives and abused their children--women who also gave marvelous lessons in public speaking to young girls across the country, so that the girls could gain the confidence to speak out on women's issues—lessons that served Barbara so well, and that she always gave them credit for. In fact, who knows? The Temperance women may have influenced the development of her feminist understanding of the world. To me, if I thought of those women at all, they were joyless enforcers of an outdated morality. That wasn't ageism, it was ignorance, seeing other women through the only eyes I was given, the eyes of men.)

We resent that the younger lesbians sometimes seem to think they are inventing their lives, as though nothing came before. But that is their reality. They have no idea who they are, and they are making it up as they go along in a world of very confusing messages. In urban areas, and with cable TV more often in rural areas, they are told that they can be out lesbians and that is at least acceptable if not downright cool; they can have marvelous sex by watching lesbian porn and a great job (at least until this Depression); if they want, they can have children, and soon they can get married—nothing is holding them back. So if their lives as women, much less as lesbians, aren't working, the problem must be them. How can it possibly be political? How can it possibly relate to a woman-hating society? Come on now.

So when I looked at FlawLes through these eyes, what I suddenly saw was a generation of lesbians who, in their own way, are as blindly and innocently inventing who they are, with as little to go on, as the lesbians of the '40s and '50s. The self-hate that came from feeling like you were the only one has been replaced by the self-hate that comes from feeling all wrong in what is so obviously a world nurturant to women and lesbians. For us to feel contempt or anger as they struggle to define themselves, including by imitating mainstream heterosexuality, is as pointless, and frankly as arrogant, as feeling contempt for the generation that preceded us, who also sometimes tried to replicate mainstream heterosexuality in their search for a way to be.

It's just too easy to resent younger lesbians for failing to see and challenge the nature of patriarchy as we did, and to decide they've simply been bought off by the mainstream, or are not learning from us because they are motivated by ageist contempt.

We were, and are, wonderful to do what we did, name what we saw, but there were many causes and conditions that allowed us to see and challenge reality as we did.

We were very, very brave and determined to deconstruct as much reality, imagine alternative ways of being and seeing, and above all uncover and face as much cruelty, suffering, injustice as we did, and I often think that it was our willingness to live daily with the pain of staring that much negativity in the face that we deserve most respect for. Still, we need to remember that when we did that work of seeing and naming, we were part of a widespread movement that was active everywhere. It was a time when even mainstream heterosexual women were daring to think new thoughts and to actively challenge received ideas and realities. (I think of Sally Gearhardt, "Women are leaving men in droves!" and of the hundreds of acts of defiance—activisms—in cities and towns around the country.) There was an entire movement beside us to help us turn painful reality into alternative visions of possibility, so that we were not always drowning in the ugliness.

This is not where women in this country are today. It is immensely painful and difficult to do the work that we did—uncovering all those forms of women-hating—without that window of opportunity. It is also much more difficult to envision other ways of being. Which is probably why there are "waves" of feminism. It is amazing to me that the young women of Rain and Thunder have, by finding each other, been able to do both—facing the ugliness and seeing the possibilities—but there will always be a handful in every period who can endure that much reality without a larger movement to support them, and it can't be expected of most.

Right now, there is a different window of opportunity—the spiritual window we've talked about with Obama—for learning to bridge all kinds of difference without either abandoning one's values or expressing hostility and indulging personal attack. That's such a relief that I don't mind riding on the wave I can see out there.

None of this, rather pedantically expressed, tells what I felt and saw that day on the desert. I felt a real kind of loving curiosity. Instead of judging them, I felt waves of tenderness for the young lesbians who are trying to figure out who they are with nothing to go on. What would it really be like to be them today? Just as I felt, listening to Barbara, a loving curiosity about what it was like to be a lesbian in the '40s and '50s. Because, however much she is told she is just like her mainstream heterosexual counterpart, I believe that mainstreaming will never work for her. I believe that it doesn't work for the heterosexual woman either. But by her nature, by her choice, I believe the lesbian is a subversive being who will always have a spirit freer than the false and confusing freedom that's being extended to her now. Even on the pages of FlawLes, this glossy magazine, I could see her struggling to know herself. I felt her courage.

Of course these young lesbians are ageist, just as they are often racist, looksist, disability unaware, etc. etc. But when Barbara confronted ageism in the '70s and '80s, there was a context, a framework, so that we had reason to expect that younger women would learn more quickly than they did. They didn't have to go into the stacks of Widener Library to find books whose titles lesbians of today don't even know.

So that's about it—the insight of minutes taking so long to spin out. I'm not sure the medium fits the message. The message is that I see each generation of lesbians needing to discover for themselves what being a woman who loves women means, and that I have a lot of faith in who lesbians are, even when they are flailing around trying to discover who they are. And in the end that is who lesbians are, aren't we—women who are free and brave enough to keep discovering who we are?

Cynthia Rich is co-author with Barbara Macdonald of Look Me in the Eye: Old Women, Aging and Ageism and author of Desert Years: Undreaming the American Dream. She is co-founder of The Old Women's Project (www.oldwomensproject.org) and most recently is the author of dharma gleanings: company for a meditation practice (www.dharmagleanings.org).