I was born in a 100-year blizzard
in Illinois cornfields,
a storm my mother picked up
and carried with her
when the electricity failed
and made her cry
huddled by the old Chambers
gas stove. She had asked for either
a job outside the house or another baby.

My father gave her a baby and housebound
came with years ahead of her
She thought I was born to be her little girl,
following a man’s foxtrot.
I chose pogo sticks and stilts
and the comfort smell of stables
She said she got the wrong baby.

I was born to love her white roses
that dropped petals like dipping petticoats
and the magic sour of snowflakes
on my birthday.
I never saw her cry again

though she might have
standing watch at the living room window
as the red wool mittens she knit
fed my mouth red-lint slush balls
I called crabby apples.

My mother was a beauty queen during the two years she went to college before the Depression ended her education. I was a tomboy -- more inclined to ride a bike fast or jump on a horse than worry about how I looked. She told my father either she would have another baby or go to work. He wanted another baby. Those differences were seeds for family dynamics that we sorted through like tangled yarn for many decades. So I became a feminist. 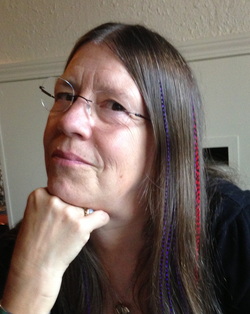