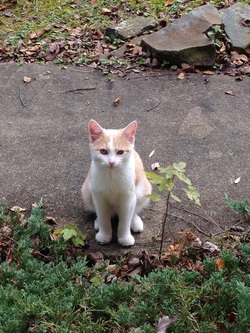 Peanut
Last year, while I was living for a time in rural Appalachia, a small kitten appeared at my door one afternoon, starving, half blind, and insistent upon not leaving until it received the food it so desperately needed.  I had always been hell-bent against cats as pets, seeing them as rather aloof and temperamental compared to dogs.  Growing up around Labrador pups, who had such earnest, slobbery, unending love for humans, cats seemed sassy and distant.  Still, the kitten persisted, standing at the door waiting for us to let it in.  My mother joked that if I gave it a name, the cat would become family.  And she was right.

I spent those months sitting on the porch with the kitten, Peanut, watching it grow every week into a beautiful, orange-haired cat.  It stretched in the sun, ran up trees, swatted at other animals, found wonder in all the details.  And, I dare say, it made me slow down, take time each morning, each afternoon, to sit and breathe and think.  It got me away from the demands waiting on the computer and pushed me out into the world, insisting that I take time to notice the changing leaves, the forest, the deer sauntering by in the early evening hours.  The self-professed radical feminist had gone soft.  I may have been writing about my man-eating, gun-slinging feminist heroes in the other room, but with the kitten I turned into a gooey, sentimental mess.  With Peanut in my lap, I felt soppy, sloppy love.

This little kitten also became a source of joy for our neighbors, and together we went through the process of naming it (two different names), getting it “fixed,” finding out that it wasn’t really a girl but was actually a boy (a misdiagnosis of gender on the doctor’s part), and then imagining how we would care for it once my sabbatical ended.  It takes a village to raise a Peanut, my partner joked.  Torn between taking the kitten with me to my home in the hot desert of Phoenix and leaving it with the neighbors, we decided that the Phoenix heat would not be a great environment for the wee kitten, and so, come December, my partner and I said our goodbyes, entrusted Peanut to the neighbors, and tried to put the kitten’s happiness above our own.

Like many animal stories, this story doesn’t end well.

Peanut was run over by a car some months later.  Our neighbors found him lying dead in the street, just outside the house.  I’ve tried to reflect on this event—on the sheer horror I felt when hearing this news—with some intellectual or at least mildly dignified part of my brain, but am left, like many of the authors in this special issue of Trivia on animal instincts, with the conclusion that we connect to animals in ways that evade words, slip away from language, reduce us to a weeping child.  We love them in ways that feel foolish, yet know that our relationship to them carries elements of destruction and despair, too.  Our complicated relationships to animals as pets, as companions, as food, as equals, as needing protection, as subjects of our dominance, makes our writing about them all the more intense, tentative, silly, unmanageable.  Animals bring out our emotional, affective selves, ones that, for women, conjure up the deeply gendered links between primitiveness, animality, womanliness, and non-rationality.

As a feminist academic and therapist, I am struck by a consistent thread woven through this issue: animals serve as a kind of projection for all we cannot otherwise express, for what we most want ourselves to be.  This truth might seem easier to understand when looking at the emotional lives of men, as animals stand in so often for the emotional connections men do not make elsewhere with humans.  As a well-known anecdote in my family, for example, my rather stern and macho father—who never shed a tear through his own mother's and father’s deaths—will, to this day, break down emotionally when thinking about the death of his dog, Swifty. (Somehow he squares this with a desire to go hunting, a paradox I find deeply troubling.)  I have seen grown men in therapy weep over the death of a pet even when they are unable to emotionally process the loss of their marriage.  Surely, the loss of pets and the grief we feel about losing the animals we love runs through our lives and through this work.

This projection onto animals also appears in more subtle and subtextual ways, as seen in the tremendously powerful poetry and prose of this issue.  Animals stand in for aggressive and sexual impulses women cannot otherwise express, as women writers connect with their own wild animal spirit or unbridled desire through and with animals. (Even Freud and Jung found notable links between horses and libido.)  Women, so often attached (unwittingly) to the animalistic or nonhuman, have used this construction to explore the meaning of their twinning or pairing with animals.  If, in a hierarchical sense, Man, Woman, Children, and Animal exist in dominance and submission roles, how might feminist creative writing subvert and challenge this arrangement?  How might women themselves experience and explore their own animalistic feelings as a mode of resistance?  How can feminists both embrace and resist the “earth mother” stereotypes and find new ways of expressing their relationship to animals and nature?  And, how does the project of “going soft”—getting sentimental about animals, seeing our own needs for love, acceptance, companionship, peace, and harmony in animals—have a place in feminist politics and feminist lives?

Popular children’s stories have exploited the power of animal projection for quite some time.  Children see themselves—the moral choices they make, their emotional needs, their friendship and love relationships, their longing for their parents’ care—through human-like (cartoon) animals.  As adults, too, we see animals through our own needs, too often forgetting that they exist as their own beings.  (Otherwise, no American would ever ingest a piece of bacon derived from sick pigs.) Part of our work in this issue, and as feminists in the world, is to expand this vision even further, to see the contradictions and complexity of how deeply we love animals and how horrendously badly we treat them in terms of environmental policies, the food industry, deadly chemicals, oil spills, and (lack of) social justice.  For me, having a pet I so profoundly loved be run over by a car—the imprint of the needy, greedy, polluting human world onto the innocent life of that little being—gave me pause and served as a much-needed reality check.

We must do better, I keep thinking. And we had better start with ourselves. 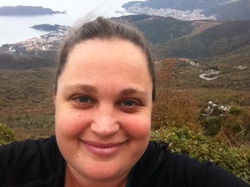 Breanne Fahs is an associate professor of women and gender studies at Arizona State University, where she specializes in studying women's sexuality, critical embodiment studies, radical feminism, and political activism.  She has a B.A. in women's studies/gender studies and psychology from Occidental College and a Ph.D. in women's studies and clinical psychology from the University of Michigan. She has published widely in feminist, social science, and humanities journals and has authored three books: Performing Sex (2011, SUNY Press), an analysis of the paradoxes of women's "sexual liberation"; The Moral Panics of Sexuality (Palgrave, 2013, with Mary L. Dudy and Sarah Stage), an edited collection that examines cultural anxieties of "scary sex"; and Valerie Solanas (forthcoming with Feminist Press in April 2014), a biography about the controversial and politically significant life of author/would-be assassin Valerie Solanas. She is Director of the Feminist Research on Gender and Sexuality Group at Arizona State University, and also works as a private practice clinical psychologist specializing in sexuality, couples work, and trauma recovery. Breanne is a member of the Editorial Collective of TRIVIA: Voices of Feminism.