Oscar of Between, Part 12

Betsy Warland
Oscar. Standing in front of first display case in the Camouflage Exhibit, Imperial War Museum. Snap. Instantaneous insight – the force of almost violent – her utter absence of camouflage: Oscar never belonging un-provisionally. Anywhere. Recently not notified of a significant feminist writers' gathering, all her increasingly used-to-be literary friends and companions invited. The white-out of betrayal. How dead-ended we are as women about it.

The score? Almost total exclusion for fifteen years since their break up. If Oscar's "X" invited, then Oscar x-ed out.

The me of memory. Is this how it works: those included failing (or feigning) to notice those not?
Endurance.
Oscar's belief no longer in others, nor herself, but in writing.
Regardless.

A couple of months later. Oscar in Montreal. On a rare writing holiday. Three delicious weeks of. Here in the cusp of March: one day everyone a-rush, heads down in the ear-numbing cold: next day sidewalks a-hum with people strolling, suddenly appearing on café terraces with coats ajar, faces hungry for taste of sun, sky a luminous blue-wind-clean from the St. Lawrence's sweep.

Sensuality of the French-speaking body. Mouth. Oscar basking in.

Her dear friend Lise three blocks away: difference between long distance calls and spontaneity. Lise insisting they go skating on Parc Lafontaine's "serpentine" pond first day after Oscar arrives. Oscar. Not having skated. For decades. Strapping skates on. A-wobble. Holding Lise's hand for first round surprised by her child-like directness in asking for help. Then, "I'm okay now." Beginning to locate skating-body mind; how to read the ice; give herself to another element. Trust delight.

Oscar. Waiting for Oscar. Having worked on writing first draft of final essay, "Sustaining Yourself as a Writer," for Breathing the Page all week. Oscar wondering, would Oscar appear here? Here being Montreal. In all this difference where she finds most affinity with other writers. Oscar sensing Oscar nearing for three days nowâ€“ elbowing out more space.

Across adjacent backyard, "brassiere woman" torques down spiral staircase as Oscar tries to decipher her age. Yesterday, Oscar noted her methodic pinning of six halter-like brassieres on frigid clothesline. Oscar surprisingly prudish about display of private self. Yet, admiring nonchalant quotidian self assuming collective self. History. Others' rows of.

Oscar now recalling her mother's adamant instructions on where to hang underpants and brassieres. Without fail. Pin them up between bed sheets hung on surrounding lines. Prevent view of by occupants in passing cars.

In the Midwest, no flags of femininity ever raised.

When adult and urban, Oscar began to realize how transparent rural life was. The state of a farmer's fields, car, lawn, house, garden, his and his family's clothes, livestock all on display.

During family Sunday afternoon drives to "see how the fields are doing," her father's verbal and body language a platform for assessing other farmers' successes and shortcomings in management: proper living.

In the city, display becomes manipulation of impressions. A businessman teetering on bankruptcy can still fool his friends, the bank, even his family. Wear stylish clothes, drive an impressive car, invent "junk stocks."

Camouflage the foundation for runaway credit.

Dinner with Verena. Talking about our writing projects. Verena finishing manuscript of interviews with four elderly men and women who left, or fled, Germany: eventually ended up in Montreal. How three out of four of them only recently began speaking German. All those decades of not. The shame, even danger of it.

Ache of empty arms of language. To be held – again – in its tender embrace.

Oscar speaks briefly of this manuscript: about betweenness; use of one fictive device; impact of WW I invention of camouflage – how it has infiltrated all aspects of public and private life. Verena bewildered: "How?"

The alterity of how Oscar sees things striking her once again. Oscar cites governance, examples how U.S. citizens abandoned their right to be told the truth decades ago, settled for what only sounds believable.

Later Oscar thinks – context: how it can no longer be assumed; how this has become a pervasive problem in the western world; how she needed to establish the context for her thinking more. Should have cited corporate marketing, how it is prevaricated on half-truths and lies. Cited the tampering with images using Photoshop to suit. Cited the altering of our bodies with Botox, plastic surgery, make-overs, ever increasing array of anti-aging and cover-up products. Cited virtual relationships replacing actual ones. Cited how scientific and economic data about environmental breakdown, global market schemes, profitability of cancer routinely manipulated, "massaged" into camouflaged jargon. Spins & pitches. Out of context stats.

The insatiable bottom line – dependent on this.

Unable to do it. Oscar just now hanging out her laundry. Stares at the final items in the basket: her underwear.

Rationalizes. They'll dry better inside. Wonders: is this some kind of rare intimacy Oscar shared with her mother? X-pose: Oscar's hanging out of her underwear is not the same as the other women on Plateau Mont-Royal.

Oscar's would be scrutinized.

Later, Oscar realizes that the gay guy's underwear (who lives below) has also been absent from his clothesline.

Membership not to be assumed.

The signals of membership often more subtle than obvious.

Café Rico yesterday, Erin talking about visiting her mother's village. One of her mom's final requests: "spread my ashes there."

Erin talking of WW II Ukrainian Nationalists' strategy for figuring out who were the Ukrainian Poles. The person in question was asked the names of various foods. As simple as that. The word immediately taking shape in your mouth and your life was ended.

Tea finished, Oscars remains perched at the window with sunlight on bare-limbed bushes and small trees a-shine as if rivulets, tributaries.

Grey cat jumps atop garden shed roof, paws diagonally across – pauses midway to scan surrounds – then ballet points down to cross bar of chain-link, highwiring it out of sight.

Oscar at window; grey cat across shed roof to chain-link: each in their morning ritual. Allegiance to even the most banal of habits, fierce.

Oscar once again reminded of the underlying caution that constricts these conversations. The spare terrain for unconventional writing by feminist lesbian writers is not enough for them all to flourish in.

Yet, every now and then Oscar smiles about the man sticking out his arm.

A now rare four-feminist-lesbian authors' reading. Oscar was third. As is often the case, the others selected work that was more entertaining and Oscar did not. The shift in the kind of listening required always worries Oscar. It can never be assumed. What if this audience refused? Her throat tightened as she walked up to the mic, excerpt from Oscar of Between in her hand. Too late now, she had to surrender to it. A couple of minutes into her reading she could feel that particular silence in the room. Now they were all at the mercy of the narrative. Then it was over. Applause. Her excruciating shyness. How to get from here to there: her seat in the back?

The space between audience and stage – Venetians called it "this gulf of sorrows."

Deep breath. As Oscar neared her seat his arm shot out: "Thank you!"

He shook her hand.

In Oscar's daily life, when encountering someone, it goes like this: some address her as a male; some address her as a female; some begin with one and then switch (sometimes apologetically) to the other; some identify Oscar as lesbian and their faces harden with disdain, or open into a momentary glance of surreptitious arousal; some know they don't know and openly scrutinize; some decide female but stare perplexedly at her sans breast chest; some are bemused by, drawn or relate to her androgyny; and for some none of this matters, only Oscar's desire to be present to herself and them.

"You're in the wrong washroom!"

On days turbulent with unpredictable reactions, Oscar longs for simplicity of camouflage. Yet has no instinct for it. It would only put her at odds with who Oscar is. Then she brightens. Oscar – person of between – notices another response from others of between. Curiosity.

While in London in 2006, I first identified myself to be a person of between. I immediately experienced a precision and expansiveness in this descriptive that had been missing for me in the noun lesbian for a long time. In retrospect, I realized that I sensed myself to be a person of between as a child, although I lacked words for it. Eventually, as an adolescent, I claimed the word artist; as a young woman, I claimed the word feminist; as a woman, I claimed the word lesbian, yet my original and abiding modus operandi has been that of a person of between. Just one example of how this expresses itself is when poets read an excerpt from Oscar of Between, they say it is creative nonfiction; when creative nonfiction writers read an excerpt, they say it is poetry.

Being a lesbian is inherently a radical position.

In Oscar, I am occupying the public world more broadly (yes, a pun too) than in much of my previous work. In this section, I am naming lesbian feminist writer-friends and places of significance to me as I map my daily experiences as a person of between. The faux journal entries form in which the narrator inscribes her position of betweenness is in fact elbowing Oscar's narrative position of betweenness out (from the private world) into the public world.

Our full presence as lesbians in the public world is still provisional and limited. Our challenge is to not project this restrictive, reactive, self-protective instinct aimed at us on to ourselves and on to one another. Particularly when we encounter our differences. 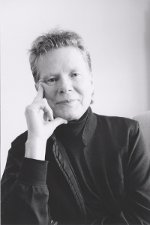 Breathing the Page: Reading the Act of Writing, a quirky collection of twenty-four essays on writing materials and concepts, was published in 2010.

Director of The Writer's Studio at Simon Fraser University, Betsy is an avid creative writing teacher and manuscript development consultant. For a free download of her essay "Sustaining Yourself as a Writer," go to www.betyswarland.com.

Her favorite introductory recurring exchange is: "What do you do?" "I'm a writer." "Oh, what kind of horses?"

Currently, she is working on a prose manuscript Oscar of Between.