The Bathing Scene from Marguerite Duras's The Lover

I read The Lover when I was fifteen.
The girl’s red doll lips became my own.
The power she had over
the Chinese man mine too.
His weakness became fuel
for a journey I was preparing for.
I needed him and despised him
before I knew why.

There is a scene in which
the man, on his knees,
bathes the girl’s slender body,
barely pubescent.
She looks down at him coolly,
braids hanging over her shoulders.
Immodest on purpose.

The lover draws a washcloth
across her hips tenderly,
with grief in his eyes.
Perhaps he is trying to wash
away the power he gave her.

She notices him loving her
the way you might notice
a penny tossed into the well
when your pockets
are filled to the brim. 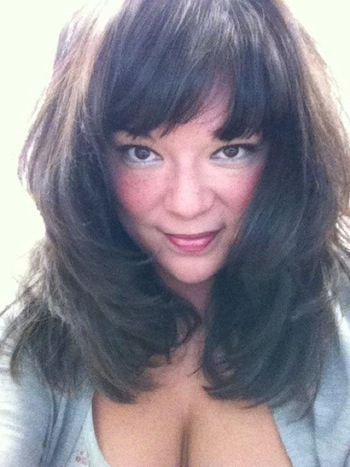 Joan Prusky Glass is a graduate of Smith College (B.A. History/Women’s Studies, M.A.T. Education). Half Korean and half Irish/Polish, she is the product of Detroit, South Korea, and New England.  Joan is a recovering Baptist, disillusioned feminist, former school district administrator, and mother of three young children.  Her poems have appeared or are forthcoming in Gloom Cupboard, Offcourse, Milk Sugar, Up the River, Bone Parade, Haggard and Halloo, Parable Press, Smith College Alumnae Quarterly, The Rampallian, Harpweaver, and Visceral Uterus among others.  She resides in Connecticut with her family.