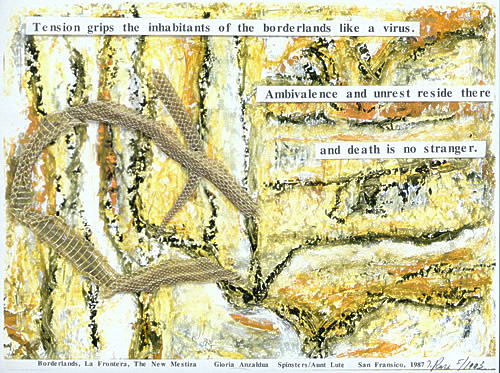 I made the “Borderlands” piece after reading Gloria Anzaldúa for "Diversity as an Environmental Issue," a seminar given by Prof. Maxine Wolfe at the Environmental Psychology Program at CUNY in 1986/7. I’m struck by how intensely relevant Gloria Anzaldúa’s words continue to be. Soon after the seminar, Maxine Wolfe, I and many others were deep in the grips of the HIV virus and “acting up.” Borderlands kept being part of my personal landscape, bringing “tension and ambivalence” to the undercurrent flow of my life.

Borderlands were also multiplying in a mind-boggling variety of ways in front of our* horrified eyes:

"…As of 20 September 2006, the West Bank closure system comprises 528 checkpoints and physical obstacles placed by the Israel Defense Forces (IDF) on roads to control and restrict Palestinian movement – representing an increase of almost 40% since August 2005. "
OCHA UN Office for the Coordination of Humanitarian Affairs, Occupied Palestinian Territories, Movement and Access Report.

Similar structures are being erected in Gloria Anzaldúa’s country, tearing up the landscape.

Borderlands, where “unrest resides” and “death is no stranger.”


For an updated list of works published in TRIVIA, please see this artist's contributor page.