The morning my grandmother’s sister called to say you had been
thrown from a car in the night,
only thirty-four, and two little girls at home,
I borrowed my grandmother’s hairbrush from her nightstand,
stood under the yellow light of the bathroom mirror
pulling white hairs from its bristle,
and wept into the sink.

At the door, my grandmother appeared.
Her hair was long then,
nearly to her waist,
white like a waterfall.  In her flowered pajamas,
she looked as if she had descended
from some other-worldly place.
“I clean my brush outside,” she said quietly,
her eyes on my fingers, cobwebbed with hair.
When I said nothing,
she told me about a swallow’s nest
she’d found in the bushes behind the shed.
Threaded into it, glinting in the morning sun,
were strands of ivory hair
scavenged by the bird,
woven between leaves and grass and string.

Your death, then, is forever tangled in this image:
my grandmother, small and thin,
standing on a concrete slab of porch
brushing her long, white hair,
pausing to pull long threads from its bristles,
offering her hands up to the breeze,
her hair carried into sky,
disappearing.

My grandmother is one of eight children, many of whom still live in Ligonier with their own large families of children and grandchildren. Since my mother was a child, this extended family has gathered for the major holidays—Thanksgiving, Christmas Eve, Labor Day, the 4th, Memorial Day. So, although I always lived away, I am grateful to have developed and maintained relationships with my great aunts and great uncles, second cousins, third cousins-once-removed, etc. Ryan, the grandson of my grandmother’s sister, was only a year older than me. When I visited, I begged to go to his house to play. At weddings and picnics, I chased him around the yard. Tall, thin, with a generous smile--he was my first crush. As we grew up, I always looked forward to seeing him at the family reunions. The last time I saw him, we had walked the trails of Lynn Run State Park while our family picnicked. We talked about his recent divorce, of moving on, of his overwhelming love for his two young daughters. He was thinner than I’d seen him, but he also seemed happy and hopeful.

That was in September. For July 4th, 2006, I once again made the trek from Rochester, NY to Ligonier, PA to spend the holiday with my grandparents and family. The second day I was there, a phone rang in my grandmother’s house. It was 4 a.m. No one calls at 4 a.m. with good news. In the bedroom next to my grandmother’s, I felt my breath freeze in my chest; I could hear her talking through the thin walls. Someone was hurt, badly. It was my beloved cousin.

Ryan never came out of his coma. He died within a few hours of arriving at the hospital. Up to that point in my life, I had never experienced such deeply felt sorrow. I couldn’t stop crying.

I wrote this poem a few months later, lying in bed in my house in Rochester, my journal on my lap, my two young daughters sleeping a few rooms away. I had tried over and again to write something for Ryan. I had wanted to read at his funeral, but the words wouldn’t come. And still, I couldn’t shake the grief that descended on me every time I thought of him. This image, of my grandmother brushing her hair, kept coming to me. I suddenly realized that my grief was larger than my cousin’s death. It was about my relationship with my grandmother and the fragility of life. It was also about this rare and special family we share, the way we are tangled together both by blood and experience. And then I realized that this poem about Ryan would also have to include the bird’s nest, so that the grief I felt could take the form of hope. And then the words came, quite simply, and with them, peace. I am so grateful that it is being published and that I can give this gift to my cousin Carol, Ryan’s mother, and my Aunt Libby, his grandmother, after whom I am named. 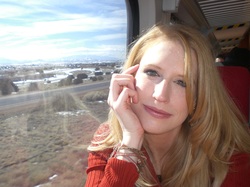 Elizabeth Johnston is Assistant Professor in the English and Philosophy Department and in the Honors Institute at Monroe Community College, Rochester, NY. She received her Ph.D. in eighteenth-century British literature from West Virginia University, where she largely focused her study on women novelists. Since graduating in 2005, she has published a range of feminist scholarship on topics as varied as the critical reception of Elizabeth Barrett Browning, the depiction of women on reality dating shows, and fashion and beauty in the Middle East and North Africa. Although she has been writing poetry since she could hold a pencil, she has only recently begun to publish her work. She has had poems appear in the online journals Organs of Vision and Speech and The Muse: An International Journal of Poetry. She lives in Rochester, NY with her partner, Brian, her two redheaded daughters, Ava and Christina, and three unruly cats.