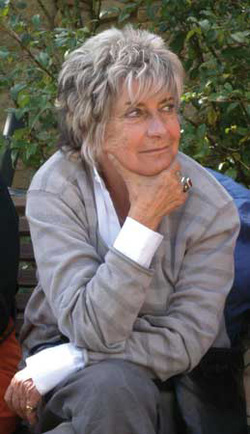 On her birthday, this past July, at the age of seventy-four, French writer Michèle Causse was, in her own words, "unborn," in Zurich, with the help of the organization Dignitas. She was said to be "euphoric" at the prospect of leaving her body on the day of her birth. (She is to appear on a Swiss TV program Temps présent in fall 2010 testifying on behalf of voluntary death).

The first time I met Michèle, at a gathering of lesbian writers in Montreal, I thought she had to be a spy. She was fashion-model glamorous in knee-high boots (it was September) and an haute couture jacket. Not long after I would discover that she was one of the most uncompromising radical lesbian thinkers and writers around—also that that she did her shopping at little-known second-hand stores in Montreal. Michèle was a great lover of literature and languages, a translator of novels by, among others, Melville, Silone, Pavese, and Natalia Ginzburg, who increasingly devoted her energy as a translator (out of Italian and English) and writer of prefaces and essays to making lesbian writers—notably Mary Daly, Gertrude Stein, Djuna Barnes and Jane Bowles—known in French-speaking countries.

Michèle was a prolific writer of essays and fictions in which she developed a radical reading and critique of the patriarchal world. She believed that changing the world begins with changing our language and she did a huge amount of brilliant, painstaking work inventing a nonsexist French grammar and lexicon. If Michèle did not have the readership she deserved, it was in part because as writer she was difficult, challenging, experimental, in part because she was not much translated into English (painfully ironic considering her own dedicated efforts as a translator). "My commitment is not towards the reader but towards the writer," she would say when asked about this. "Never read or approved" is her chosen epitaph.

As an interviewing subject, Michèle was a fount of insight, provocation, and dazzling eloquence. In order to commemorate Michele in this issue, I decided to pull out some of the more notable comments she made about lesbians in the interviews we published with her over the years in Trivia: A Journal of Ideas. I also asked Harriet Ellenberger, co-editor of Trivia: Voices of Feminism 2 and 4-8, to comment on her friendship with Michèle.

From "For a Sea of Women," interview by Gloria Escomel and Francine Pelletier for La Vie en Rose, 1986, trans. Lise Weil. Appeared in Trivia 13.

…we must acknowledge the lesbian writers as having given an ontological existence to women. I'm thinking of Djuna Barnes, but also of Nicole Brossard, Adrienne Rich, etc. The woman who bets on women—the only utopia.

From an interview by Catherine Goddard for Lesbia, trans. Lise Weil. Appeared in Trivia 14.

The enormous difference there is from one to the other. . . even if it's an unhappy difference, the richness of this difference remains, it's what dazzles me in every lesbian relationship. Difference frightens, seduces, astonishes, stupefies, and in the end it is absolutely instructive. I believe that fundamentally a lesbian body is a body which wants to learn indefinitely and to its dying day. Lesbianism is, it seems to me, the only way which allows a woman to know more about this difference, and to bet on it, whatever the avatars and the difficulties encountered.

The following remarks are excerpted from an interview I conducted with Michèle in fall of 1991 on the subject "what is a lesbian?" The interview appeared in Trivia #20 and can also be read online in the third issue of Trivia: Voices of Feminism.

. . . A lesbian is a seer who is concerned with the destiny of her class of sex, she has an extreme sense of responsibility towards her similars, she has an excruciating pain about the destiny of women at large, she is constantly wearing this pain on her shoulders, and this is something which never never abandons her. So she has not only her own grief, personal, private, her own relationship with another lesbian which is so difficult inside this context of forced heterosexuality, capitalism, everything she hates, but on top of it she has this enormous pain of going constantly into a world where women are as they are, the projections of men, whether successful or failed, a fiction.

And she invents, out of nothing, out of two fictions who have told her all her life what she has to be. The lesbian has never been what she has to be, she has become what she wanted to become. . . .Of course I am talking about the ideal, but what is the point of not idealizing? I mean I can't, maybe that's my problem, I can't talk but ideally…

(Please note: all interviews can be read in their entirety by ordering the issues online; please see our archives. Other translated works of Michèle's can be read in Trivia 13 and 14.) 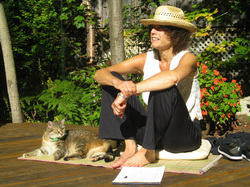 
For an updated list of works published in TRIVIA, please see this author's contributor page.
Harriet Ellenberger
I met Michèle Causse in 1986, at an informal gathering of lesbians and feminists in the Outremont home of Marisa Zavalloni and Nicole Brossard. Michèle was ten years older than I was, and several lifetimes' more worldly, but I trusted her the moment I heard her voice, as if we had been friends and comrades-in-arms before. At the dining table, I asked her an out-of-the-blue question about the possibility of magic, and she replied, "oh yes, in Montreal -- not in Paris, in Montreal." Soon afterward we both immigrated to Quebec; she had her immigration interview in Paris on the same day I was being interviewed in Boston.

Over the years the connection between us held, though we saw each other infrequently in Montreal and, after she returned to France, communication was limited to letters, e-mails, occasional nearly speechless phone calls, and one spectacular week-long visit in 1999, to "Trois Guinées," the home she shared with Nicole Farny in the countryside near Montvalent.

Now that Michèle's body has been scattered to the winds, my memories of her grow more vivid and she seems to be everywhere. There will be no new letters arriving, but as I reread our nearly twenty years of correspondence, I discover again her extraordinary acts of friendship to me. In the early to mid 1990s, I was broke, terrified, stuck in unrequited love, alone in a city and country I didn't understand, alienating friends and allies right and left, and every writing project I began ended up in the garbage can. Michèle acted as if all this were quite normal, treating me with the same affection and respect she'd accorded to my pre-crash self. That's the kind of generosity so rare one never forgets it.

I think Michèle's greatest gift to me, though, was simply the way she showed me herself, in language. Who she was I found fascinating and encouraging, and her self-revealing letters were always an infusion of life energy. One time she startled me by writing, "If you had not existed, I would have invented you." What a great line, I thought, and it was. It deserves to be read by more than me. And it says what I would say to her now if I could: If you had not existed, Michèle, I would have invented you. 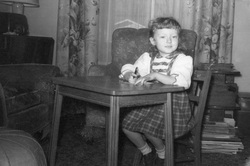