(Written when the Newsweek "lesbians" cover story appeared the week after the "Could Dinosaurs Return?" cover story.)

News Bulletin, the year 8093–Paleoarcheologists have discovered an ancient mosquito suspended in amber resin in a dig outside a known lesbian festival site in northern Michigan. Scientists were studying the foundation of an ancient "eatery," complete with ceremonial food arches, when they chanced upon the find. The excellent condition of the site also enabled them to uncover a small container of carbon foodsticks labeled "Dino-Fries."

Hypothesizing that the lambent mosquito had bitten a lesbian attending the festival, scientists used a syringe found in a diet Pepsi can to extract blood from the mosquito's perfectly preserved and engorged proboscis and isolated an incomplete strand of DNA. They augmented the partial strand of DNA with the DNA from a leather softball cover, circa 1991, and using ordinary tap water, rehydrated the complete DNA and ecce lesbo! A reanimated lesbian.

"This is an extraordinary moment," said project spokesperson Simone Norway, "for it has allowed us to end our centuries-long speculation about what caused the lesbian to become extinct. As soon as 'Amber' came around, we were able to talk to her and find out what happened in those crucial latter years of the twenty-first century."

Archeologists at Hetrick-Martin University had led research in the field for years, pioneering dig techniques at sites all over North America and proffering several intriguing theories on lesbian extinction.

In 7969, "Stonewall Six Thousand," at an East Coast urban site, they uncovered scuffed, but perfectly intact Vibram-soled footwear, "Doc Martens," which still had a half-life of about a billion years. Scientists speculated that their huge, weighted soles made it difficult for lesbians to flee from their predators. "We believe that in come cases, especially in the larger-sized footwear, lesbians undecided on this style looked down at their feet and actually died of fright. The later platform style was apparently quite lethal," said Norway.

In 7890, Western water workers chanced upon the site of the second Lesbian Herstory Archives. The treasure trove yielded up invaluable information from the late 1900's, a crucial period in lesbian evolution. Artifacts found at that site refuted the earlier-held notion that some drastic environmental or climatic change, some hole in the ozone layer ("bigger than Perry Watkin's nose ring"—unclear cultural referent, but very funny to many at the time), caused the Great Dyke Demise.

After poring over archival information, scientists speculated that in fact the sudden glare of media publicity was too much for the lesbian organism. "After living mushroomlike for years in the primordial ooze of rumor and innuendo, lesbians were sent into shock by the 'Lesbian Chic Period,' following as it did on the heels of the 'Stealth Lesbian Era.' Despite an emergency airlift of cool sunglasses from L.A. Eyeworks, many perished from squinting."

Perhaps the most controversial theory was presented at the 6100th Annual Women's Studies Conference by Professor Mookie McClinton, famous for her ovulal work, "Lesbian Family Trees: The Burning Bush." In her thesis on the Dyke Diaspora, "Lesbo a Go-Go?" she stated, "I believe, quite simply, that they ate their own. And I don't mean that in the good, old way," she added wryly. "It's no coincidence that at that same time, the mainstream, swollen from assimilating many tributaries, overflowed its banks. Not only were food sources destroyed, but weak dykes were blamed. It was The Hunger part two, redux, pas de deux all over."

Scientists briefed a slightly dazed Amber, wearing multipocketed pants and a No One Knows I'm a Lesbian T-Shirt, very popular in the Irony Age in the late 1900's. She rejected the shoe, sunlight, and snack theories. "NOA," she said flatly. None of the above.

"Here's what happened. Cruises became popular. Especially after the pictures of gay sailors in that military fight. RSVP Cruises started doing submarine cruises. And the Aqua-Separatists sailed everywhere: Alaska—the 'KlonDyke' Tour; Australia—"'The Down There Tour'; Lesbos— 'The Redundancy Tour.' Not me. I believe a navy of ex-lovers cannot sail. I was actually one of the last land-based lesbians.

"Anyway, they ran out of places to go. At the time of my tragic accident, a mud-wrestling top-bottom thing, I know plans were in the works for a huge cruise to Jupiter. They'd be gone seven thousand years, stop at other planets out and back with a different show every night. There were just that many lesbian comedians then. Lesbian lift-off was scheduled for late 1998. Near as I can figure, they'll be back soon, give or take a month."

Forensics Follow-up
Submitted by: The Girl with the Labrys Tattoo
December, 8093
Subject: Amber

Following several freeze-dried vegan meals and several days rest, subject who had been demonstrably groggy in first interview was questioned again. The Land-based subject said she maintained cell-phone contact with the mother ship via a Vonage galactic phone card for twenty years. After subject lost bars, she lost regular contact with several passengers on board. From those conversations the following details emerged:

Subject said that the all-the-lesbians cruise actually lifted off for Jupiter in 2008 not 1998. First, sex toys set off security alerts and caused long security delays. Then "irregularities" with the visas of several vocal anti-Iraq War performers further delayed the flight. And finally air traffic at JFK was terrible causing a ten-year delay of liftoff.

The planetary demotion of Pluto caused several disgruntled lesbians from Northampton, MA to demand a full refund. Then the toilets malfunctioned in December 2028. The frustrated ship's captain, Captain Judy, forestalled a mutiny by ordering the suspended animation of all passengers onboard until return to Earth.

Boosted by massive injections of gingko biloboa, the subject offered her analysis of the events that led to the pre-mutiny suspension. The irreconcilable rancor on board reflected the loss of a sense of community, the hallmark of late 20th century lesbians. Facebook, twitter and other social networks had replaced actual lesbian interaction via potlucks, music festivals and The Dinah Shore Golf Classic. Many lesbians were disappeared into parenting. Butch lesbians were completely domesticated by a gay parenting fad, infected with Mad Vow Disease got gay-married or transitioned into drag queens, FTMs or bois. Femme lesbians also gay-married and experienced permanent identity damage from the L-Word. The word "lesbian" fell into sneering disrepute and was eventually replaced by "queer" as an identifier.

Though the fact of same sex attraction between women still existed and was relentlessly acted upon [except in the movie The Kids are All Right] it was extracted from a broader feminist context.

Further questioning of the reanimated returnees and a sequel are planned. 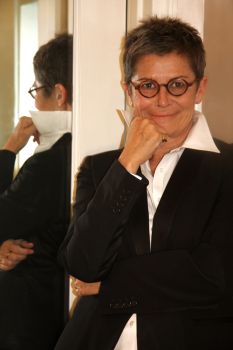 In 2010 Kate's LADY HAHA will tour the US and Canada. In April, she will interrupt her tour for BACK TO BACK, a special performance with Lily Tomlin in New York.  This year's tour follows previous tours: Yes on K8 (2009), Hilarity Clinton (2008),  and Climate Change (2007).  In 2006, Kate Clinton celebrated her 25th Anniversary of performing with a 50-city It's Come To This! tour. A documentary DVD is available with extra features along the tour route, of rare interviews, backstage banter, readings from her book, and celebrity cameo appearances.