I am a woman, a poet
in this nothingness
that batters my body

it has a trace

my womanhood
my Achilles toe

my dog that barks every month 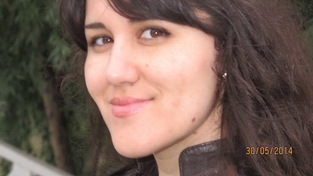 Müesser Yeniay was born in İzmir in 1984 and graduated from Ege University with a degree in English Language and Literature. She has won several prizes in Turkey. Her books are Darkness Also Falls Ground (2009), I Founded My Home in the Mountains (translation), I Drew the Sky Again (2011), The Other Consciousness: Surrealism and The Second New (2013), and Before Me There Were Deserts (2014). She published Contemporary Spanish Anthology with Metin Cengiz and Jaime B. Rosa, and she has translated the poetry of Ronny Someck (2014), Attila F. Balazs (2015), and Vietnamese poets Mai Van Phan and Nguyễn Quang Thiều (2015). Her poems were published in Hungarian by AB-Art Press as A Rozsaszedes Szertartasa (2015). In the United States, her poems were published by CC. Marimbo Press with an introduction by activist poet Jack Hirschman (2015). In Vietnam, her poetry collection Nghi le Hai Hoa Hong Trong Vuon was published by Vietnam Writers Association both in English and Vietnamese (2015). In 2015, she was a writer resident in OMI arts center, Ledig House in New York. Müesser is the editor of the literature magazine Şiirden (of Poetry). She is currently pursuing a Ph.D. in Turkish literature at Bilkent University, Ankara, and is also a member of PEN and the Writers Syndicate of Turkey.