I am writing this to you even though I understand
that you are nothing.
You did not develop hearing or sight.
I don’t even know what to call you.

Let’s pretend your name is Cortez or Arlo,
Veronica Mae or Daisy like my grandmother.
You have dark hair and your father’s eyes--
the saddest eyes in the world, according to a girl
we once knew in Poland.
You are tiny and lovely
and your tears taste like something I have known.

The story begins with a stick: two lines
instead of one, life changes in an instant.
Suddenly, a path opens up, traveled by millions of women,
by my mother and little sister, by teenage girls,
women with everything, women with nothing.
By heaving horses, by softly bleating ewes.
I will follow them all.
I will sweat and scream and call myself a mother.

My first lesson in motherhood:
when something is wrong, you know.
In the frantic rushing of your blood,
the cauldron of your belly, you know.
People will say, oh, it’s normal, it’s fine, don’t worry.
They will find a hundred ways to justify this and that.
And you will play along, laugh at their jokes,
eat their dinners, swallow your terror.

Because no one wants to consider obstacles on the path,
nettles pricking skin, thorns tearing flesh,
bushfires raging.
No one wants to talk about that.

Seven weeks, a hot July.
I convinced myself the fire in my gut
was an ulcer, stress from recent loss.

(An unusually warm January: blighted ovum,
my body, a potato field.
I carried it for two more weeks,
waiting for gravity, inevitability.
For two weeks, I walked with death.

Death was a blood orange.
I buried it under the magnolia.)

This time I thought, I’m just scared, that’s all.
But I couldn’t keep up with life.
I lagged behind like someone who had lived too long.
Exhaustion is normal, don’t worry!
Yes, I just need to lie down because I don’t feel right
and if I lie down, I’ll be okay.
And then a thousand crystal dreams shattered inside me.

It took three nurses, including my mother,
to convince me to go to the hospital.
I didn’t see any reason. You can’t stop gravity.
But I was in so much pain, I couldn’t sit still.
I writhed, gripped, pushed myself up,
sat back down, rocked back and forth
until morphine sank into my blood
and I sank with it.

A woman invaded me with her instruments.
She had taken hours to arrive, and all the time
I had thought: nothing.
On the table, my knees shook
from cold and fear. I kept apologizing.
When your father described our long wait for her,
she said, in a painfully sweet drawl, oh my stars!
I have never wanted to hit someone so much in my life.

Oh my stars, as she wheeled me across the hospital.
Oh my stars, all the way back to the ER.
She would not shut the hell up.

I was bleeding internally. There was talk of a transfusion.
They removed all my jewelry and whisked me off,
but I begged to call my mom first.
She was so far away, panic in her voice, helplessness.
I know, Mom, I thought, you can’t do anything for your kid,
and neither can I.

In the operating room, I considered the dingy ceiling.
It didn’t look like a TV show.
I hoped it wouldn’t be the last thing I’d ever see.
When I woke, it was a new pain, dull and thick.
Your father held my hand as I drifted back and forth.
I dreamed of Swiss Family Robinson. I dreamed I was a penguin
on a glacier full of penguins. You know how the dads
care for the egg until the baby comes? That was me.

They had to cut me open, cut you out,
along with the tube that was your home.
I thought you were going to be
our baby, but you were just trying to kill me.
It’s okay, I know you didn’t mean it.

I felt lucky to be alive.
Had I lived in another country or an earlier time,
I’d be dead. Had I ignored all those nurses,
even my own mother, I’d be dead.
All for something as common as motherhood,
for something I was never sure I wanted.

People say, when are you two going to have kids already?
I laugh at their jokes, drink their wine, swallow my grief.
I feel like I’ve joined a secret club I’d rather not know about,
but that’s the thing, isn’t it? No one really wants to know.

The path is now a labyrinth.
When I wander close, I feel the hot breath
of the minotaur, hear her sweet drawl.
All I have is this body, I say; my scars are not shields.
I turn away from her,
from you. 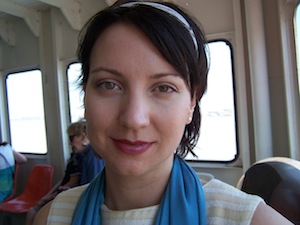 Sara Baker is a writer, editor, and women's advocate living in Knoxville, Tennessee. She has developed outreach programs for immigrant and refugee victims of gender-based violence, created advocacy and communication plans for nonprofits, led workshops for women and girls, and taught English as a second language in Poland. She holds an MA in English with a Writing Concentration from the University of Tennessee, where she studied with Jack Gilbert and Marilyn Kallet, and a BA in English and Religion from Maryville College. Her poetry has been published in Earth's Daughters, We'Moon, and Low Explosions: Writing on the Body. Her essay on social reformer Fanny Wright will come out later this year in American Association of University Women's Tennessee Women of Vision and Courage.